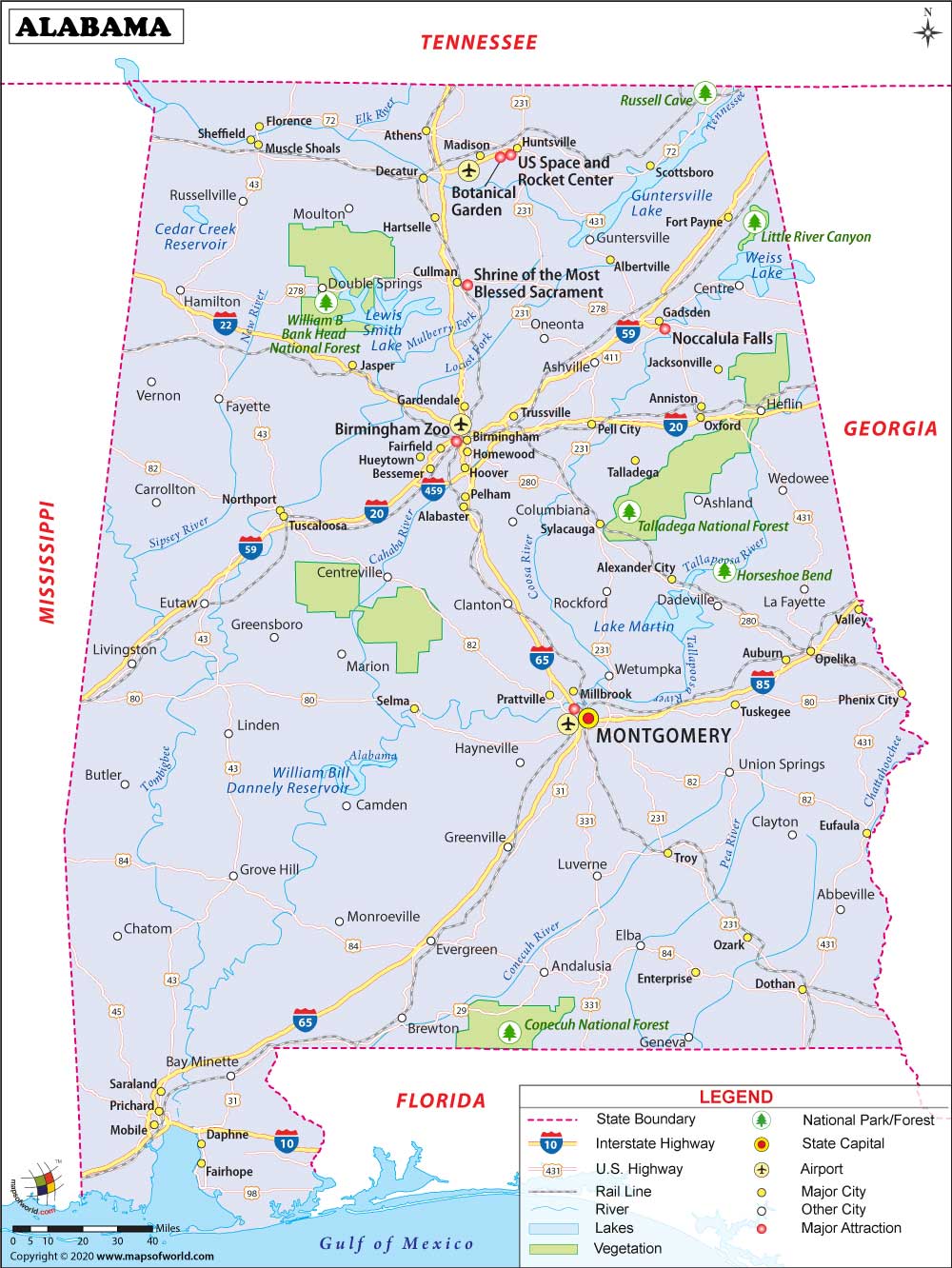 Explore this Alabama Map to know everything you want to know about the twenty-second state of the US. Learn about Alabama’s location in the USA, geography, official seal, flag, climatic conditions, time zones, area codes, zip codes, etc. Also, learn about its major cities, location of the capital city, history, national parks, hiking trails, FAQs (Frequently Asked Questions), and others.

Montgomery is Alabama’s capital. Charleston is the largest city. While Huntsville is the largest metro, Greater Birmingham is the largest urban area. English is this state’s official language. Around 95% of the population speaks English, followed by Spanish (about 3%). In the US, Alabama is the 24th most populous state.

The current design of Alabama’s flag was adopted on February 16, 1895.

Alabama’s official government emblem is the Great Seal of the State of Alabama. William Wyatt Bibb, the Alabama Territory’s first governor, designed this seal in 1817. The Alabama Legislature adopted this seal officially in 1939.

The Great Seal of the State of Alabama is circular. Design of the seal features:

Alabama Location Map shows the exact location of the US state of Alabama on the United States map. This map shows the US state’s boundaries, neighboring countries, and oceans.

The State of Alabama is spread across the southeastern region of the USA. It shares its border with:

Paleo-Indians were the first inhabitants of this place, now called Alabama. They used to roam this land area around 10,000 years back. From 1000 ce to 1450, people belonging to the Mississippian culture used to live in Alabama. The native Americans who used to live here were the Cherokee, the Chickasaw, the Choctaw, and the Creek.

Spanish explorers were the first Europeans to land here. In 1540, the Spanish explorer Hernando de Soto led an exploration team to the area now known as Alabama. In several places, the French built multiple settlements in the early 1700s. France gave away Alabama to the British in 1763.

Mobile was captured by the Spaniards during the American Revolution lasted from 1775 to 1783. The British troops surrendered to the US Army in 1783. However, the US forces captured Mobile from the Spaniards in 1813. In 1819, Alabama attained statehood and was admitted to the Union as the 22nd state of the US.

Almost all the Native American tribes (except the Muscogee) signed treaties with the US government and gave their land to the white settlers. The Muscogee tribe resisted the advance of the white settlers, leading to the Creek War from August 1813 to March 1814. All major tribes moved to the Mississippi River’s west by 1839.

Major civil rights protests took place in Alabama, including the Selma to Montgomery march, the Birmingham Campaign, and the Montgomery Bus Boycott (after Rosa Parks got arrested for not leaving her seat on a bus).

Cheaha Mountain is the highest elevation point at 2,407 feet (733.7 m). The state’s lowest point is the Gulf of Mexico. Alabama, Chattahoochee, Tennessee, and others are the major rivers in Alabama. The major lakes in Alabama are Guntersville Lake, Neely Henry Lake, Wheeler Lake, Wilson Lake, Pickwick Lake, and many more.

Learn about the location of mountain peaks, rivers, lakes, the state capital, state boundary, ocean, and neighboring states from this Physical Map of Alabama.

Alabama has 67 counties, which are equivalent to counties. Baldwin County is the largest county, and Etowah County is the smallest county. Check the Alabama County Map to learn more about the location and boundaries of different counties in the state.

The area codes in the US State of Alabama are:

The Alabama Area Codes Map helps you locate a particular area code. You can also use it to learn more about the area code boundary, county and state boundaries, and state capital.

Learn about the state’s major cities from this Alabama cities map. It also helps you to know the exact location of the state capital, other cities, state boundaries, neighboring states and oceans, and many more. Montgomery, Birmingham, Huntsville and Alabama’s most prominent cities are many more. Check out the Alabama Cities Map for more details.

In Alabama, you can enjoy 807 recreational trails (hiking, backpacking, mountain biking, and other adventurous trails). Walls of Jerico Trail, Cave Creek Trail from Cheaha Trailhead, Sougahoagdee Falls, etc., are some of Alabama’s most popular hiking routes.

Check out the National Parks in Alabama Map to get a clear idea about the locations of different national parks, monuments, preserves, etc.

The climatic condition in Alabama is categorized as temperate. It is characterized by hot summers but mild winters. Copious precipitation takes place throughout the year. The annual level of precipitation is around 56 inches (1,420 mm).

FAQ #1: What Time Zone Is Alabama?

FAQ #2: What Is The Capital Of Alabama?

Ans: Montgomery is the capital of Alabama.

FAQ #3: What Is Alabama Known For?

Ans: Snowfall is rare in Alabama. Every winter, a dusting of snow is experienced on the northern side of Montgomery. Every few years, heavy snowfall takes place moderately.

FAQ #5: Who Is The Governor Of Alabama?

FAQ #6: What Is The Population Of Alabama?

Ans: Alabama’s population in 2022 is estimated to be 5.05 million, making it the twenty-fourth populous state in the USA.

FAQ #7: What Is The State Bird Of Alabama?

FAQ #8: When Did Alabama Become A State?

FAQ #9: How Many Counties Are In Alabama?

Ans: There are 67 counties in Alabama.

FAQ #10: What is the Largest College in Alabama?

Ans: The University of Alabama in Tuscaloosa is the largest college in Alabama. The largest two-year college in the state is Birmingham’s Jefferson State Community College.