The city of Mobile is the county seat of Mobile County and the third most populous city in the southeastern state of Alabama. 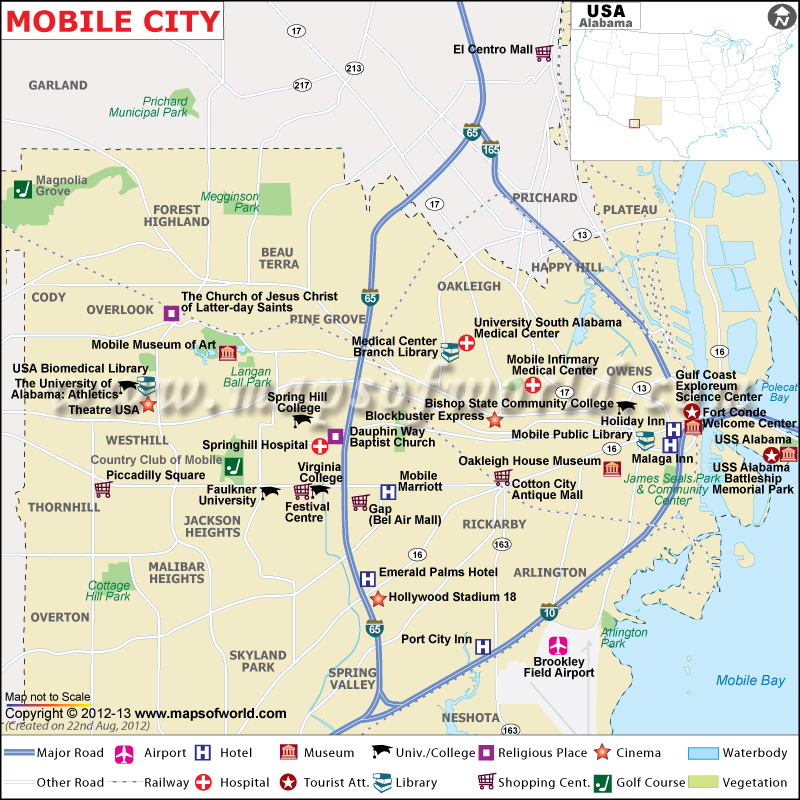 The city of Mobile is the county seat of Mobile County and the third most populous city in the southeastern state of Alabama. It derives its name from the Mobilian Tribe that inhabited Mobile Bay. The city is located on the banks of River Mobile on the northern part of the Gulf of Mexico. Historically, Mobile was the capital of French Louisiana. Thereafter, it became a colony of Britain and Spain. It was only in 1810, that Mobile became a part of the United States of America and in 1814, it was incorporated as a city.

Mobile is famous for its port, the only sea port in Alabama which also serves as the nerve center of the city's economy. The major industries in Mobile are steel, ship building, services, retail, and manufacturing. The city is also a favorite tourist destination, thanks to its rich history and multiculturalism that attracts thousands of tourists every year from all over the globe.

Which is the best season to visit Mobile City ?
Mobile has a mild sub tropical climate with hot summers and pleasant winter. It is the winter season that sees much of the tourist traffic and Mobile can get rather crowded during this time. Head to mobile in summer if you'd like to visit when there is not much crowd. Hotels also offer discounted fares at this time. Summers, however, can be quite humid in Mobile.

Airport and Public Transport in Mobile City
Mobile has two airports- the Mobile Regional Airport and the Mobile Downtown Airport. The city has a well connected network of roadways, railways, and waterways. The intercity bus service by Greyhound Lines is inexpensive and comfortable. There are various taxi and limousine service providers in Mobile. You can also easily rent a car from any of the numerous car rentals available in the city. National and Alamo are popular car rentals in the city.

Accommodation options in Mobile City
Some popular luxury hotels in Mobile are The Battle House, A Renaissance Hotel and Spa, Malaga Inn, Holiday Inn, Hampton Inns and Suites and Candlewood Suites. If you are looking for budget hotels, then, Baymont Inn and Suites, Tillman's Corner, Super 8 Mobile, Hwy98, Red Roof Inn are some popular options. You can also put up at B&Bs such as Berney Fly Bed and Breakfast, Fort Conde Inn, MY Victorian Bed and Breakfast and The Kate Shepard House Bed and Breakfast.

Things to do in Mobile City

Visit Museums
If the military history of the United States interests you, visit the Battleship Memorial Park. This museum houses warships, submarines, and Korean War and Vietnam War memorabilia. Discover a bit more about the American Civil War at Fort Gaines, Fort Morgan, and Historic Blakeley State Park. The Museum of Mobile and the Oakleigh Historic Complex are historical museums that tell the story of people of Mobile. It is a well known fact that Mobile is the home of Mardi Gras; the city has a museum dedicated to it called the Mobile Carnival Museum. Some other important museums in Mobile are the Bragg-Mitchell Mansion, the Richards DAR House, and the Condé-Charlotte House.

Explore Historical Sites
Mobile is a city steeped in history and thisis quite evident from the architectural styles of the buildings - Greek Revival, Gothic Revival, Italianate, Colonial Revival, Tudor Revival, Spanish Colonial Revival - a colorful medley of delightful structures. Do not forget to visit the historic districts - Old Dauphin Way, Lower Dauphin Street, Leinkauf, De Tonti Square, and Oakleigh Garden and admire the beautiful architecture. Mobile also has some historic cemeteries like Magnolia Cemetery and Catholic Cemetery which are frequented by tourists.

Parks and Gardens
The Mobile Botanical Gardens spanning over an area of 100 acres, are home to hundreds of different varieties of flora. This is also a popular tourist spot. Bellingrath Gardens and Home located on the banks of River Fowl is a botanical garden ideal for long nature walks. Some other parks and gardens in Mobile are the Chickasabogue Park Alabama and the Herndon Park.

Indulge in Entertainment and Activities
Mobile is the cultural hub of Alabama. The city is home to the Mobile Symphony, the Mobile Opera, and a ballet company. The Saenger Theatre is an important center of performing arts and has a lot to offer its visitors. Mobile is well known for its carnivals, especially the Mardi Gras. do not miss participating in the carnival. As far as the music scene is concerned, Mobile has many outdoor and indoor venues where artist belt out all time favorite songs. The city also hosts BayFest, an annual three day music festival that sees as many as 125 live performances throughout the city. Mobile is also a popular spot for boating and fishing activities. In case you like golf, head towards any of the popular golf courses including the Azalea City Golf Course, Spring Hill College Golf Course, or the Gulf Pines Golf Course.

Where to eat in Mobile City

Mobile restaurants such as the Original Oyster House, Baumhower's, Brick Pit, Cafe Royal, and Callaghan's Irish Social Club are known to serve quintessential American cuisine. If you are looking for Asian cuisine, visit Three Flavors, Samurai J, Fuji San, or Pho88. Try True Midtown Kitchen, Wintzell's Oyster House, or Felix's for the mouth-watering sea food that Mobile is famous for. Some other popular restaurants in Mobile are Osman's Restaurant, Mediterranean Sandwich Co (Mediterranean cuisine) Jerusalem Cafe (for Middle Eastern cuisine), The Bull (Mexican food), Via Emilia (for Italian delicacies), and Texas Roadhouse (for steaks).
Where to shop in Mobile City
Visit the fabulous shopping malls of Mobile such as the Springdale Mall, the Colonial Mall Bel Air, El Centro Mall, and Collins Tuttle and Company's Inc for an amazing shopping experience. If you wish to buy souvenirs for near and dear ones back home, one of the numerous gift shops on Old Shell Road, Schilinger Road is ideal. For antiques visit Antiques at Loop (Airport Boulevard), Cotton City Antique mall (Airport Boulevard) and Atchison Imports (Dauphin Street).