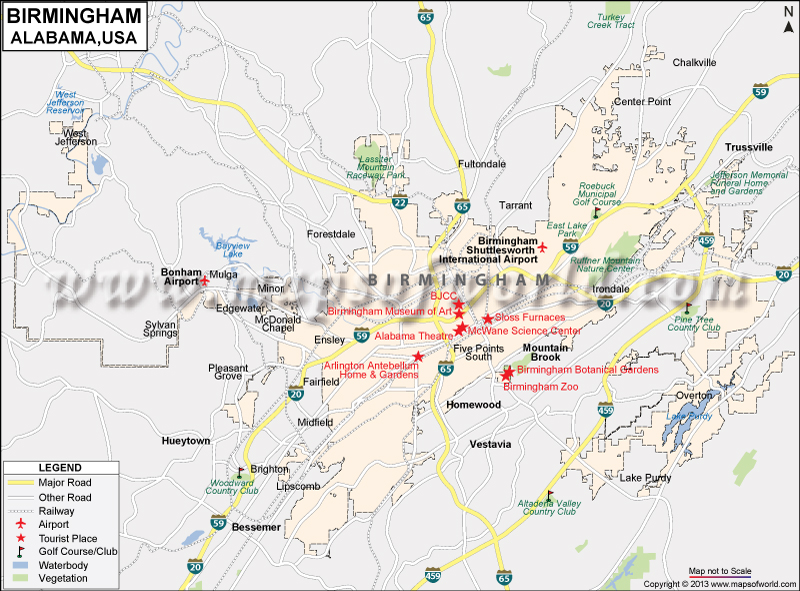 The city of Birmingham in Alabama is located in the heart of the southeastern region of the United States of America. It is a renowned center, which enjoys significance for a diverse range of subjects like medical research, banking, music, technology, art, engineering, and higher education.

It is a municipal corporation established under the laws of the State of Alabama. Birmingham is in fact the largest city in the state and ranks 13th among the largest southeastern metropolitan areas.

The Birmingham International Airport acts as the major connection to the areas of Birmingham, Alabama, and Central Alabama. Located in downtown Birmingham in its northeastern direction, this airport is connected with 2 major highways, the I-20 and I-59. The Birmingham International Airport is the largest in Alabama and is also the busiest serving almost 3 million passengers in 2005. Beside the north-south runway lies the interesting Southern Museum of Flight.

Places to visit in Birmingham

Some other sights which can of equal appeal to the interested visitor are :

Although there are a total of 15 school districts in Birmingham, some of the comparatively better ones in the metropolitan area deserve detailed mentioning. They are:-