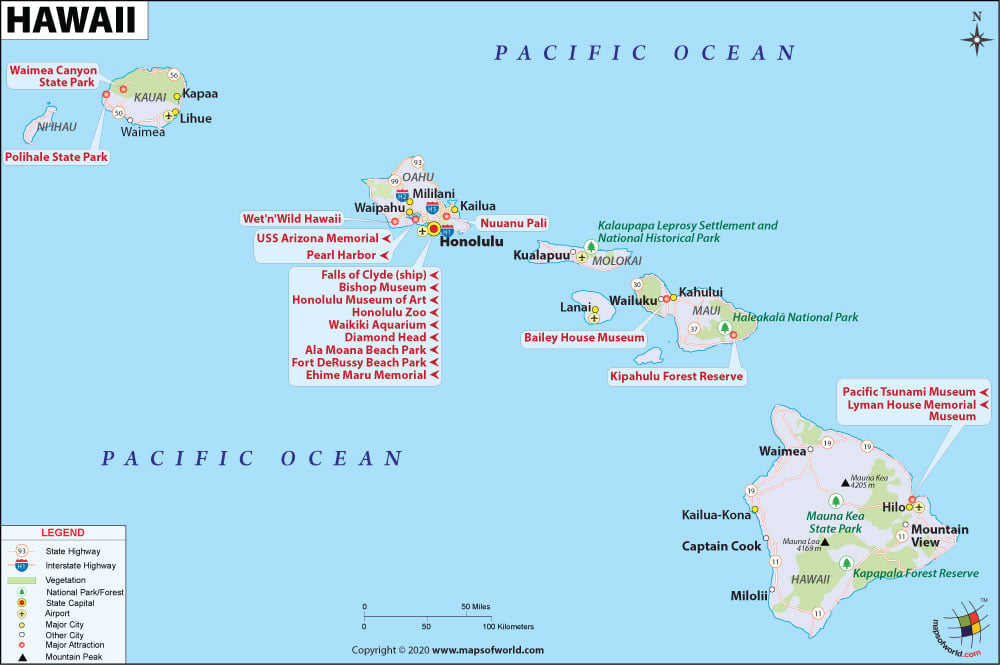 The US State of Hawaii is the 50th state in the United States. On August 21, 1959, it was admitted to the Union, and Hawaii achieved statehood. The State of Hawaii’s nicknames are:

Honolulu is Hawaii’s capital city and also the state’s largest city. Hawaiian and English are the official languages of the state. In the US, Hawaii is the 40th most populous state.

The Hawaii Flag was officially adopted on December 29, 1845. The design of the Hawaiian flag included two sections:

These stripes symbolize the eight major islands of Hawaii:

Hawaii’s official government symbol is the Great Seal of the State of Hawaii. It has a circular shape with a diameter of two and three-quarters inches. Hawaii’s official seal design has one inner circle and a ring surrounding it.

Hawaii Location Map shows the exact location of the US state of Hawaii on the USA map. This map shows the boundaries of this US state, neighboring countries, and oceans.

The State of Hawaii is situated in the western region of the country. It is located around 2,000 miles (3,218.7 km) away from the mainland of United States. It has no land boundary shared with any other state or country.

At 13,796 feet (4,205 m), Mauna Kea is the highest elevation point. The state’s lowest point is the Pacific Ocean. The Wailuku River (in Hawaii) and Anahulu River (in Oahu) are two major rivers in the state. Salt Lake is a central lake.

Hawaii is the only state in the United States with an archipelago consisting of a chain of 132 islands and islets. There are 8 main islands and 124 islets. This archipelago is spread across a stretch of 1,500 m (2,400 km). From west to east, the eight islands are:

Learn more about the location of mountain peaks, rivers, lakes, state boundaries, the state capital, neighboring states, ocean, and from this Physical Map of Hawaii.

The mountainous regions in the various islands of Hawaii get an annual average temperature of:

The Polynesians arrived in Hawaii around 1500 years back. The first European to arrive in this archipelago was Captain James Cook. He landed in the Hawaiian islands in 1778 on Kauai island’s Waimea Bay. After the Earl of Sandwich, he named these islands “Sandwich Islands.”

In Hawaii, the first missionaries arrived in 1820. From 1820 to 1845, the Hawaiian Kingdom’s capital was Lahaina. On Kauai island, the first sugar plantation opened up in 1835. The Hawaiian Kingdom changed its capital to Honolulu in 1845. The Kamehameha dynasty ended in 1874 after the death of William Charles Lunalilo. “Aloha ‘Oe” was penned by Queen Liliuokalani or Lydia Kamakaeha in 1878.

The legislature and cabinet of the government were empowered, and the Hawaiian monarchy’s authority was curtailed in 1887. The 1887 Constitution of the Kingdom of Hawaii was signed, and it became known as the Bayonet Constitution. With the house arrest of Queen Liliuokalani in 1893, the dismantling of the Kingdom of Hawaii started. Through the Newlands Resolution, the United States annexed Hawaii. The Organic Act established the Territory of Hawaii in 1900. On March 11, 1901, The Moana Hotel (the first Waikiki hotel) opened. It was also affectionately called “The First Lady of Waikiki.”

Hawaii became the fiftieth state of the USA on August 21, 1959, after a popular vote. Hawaiian became the official language of this state in 1978 through the Hawaii State Constitutional Convention. Barack Obama (the first African American to become the forty-fourth president of the United States of America) was born in Hawaii, Honolulu.

Hawaii has only one area code, and it is 808. The Hawaii Area Codes Map will help you locate any area code you are searching for. You can also use it to learn about the area code boundary, county and state boundaries, and state capital.

Learn about Hawaii’s significant places from this map of cities. You can know the exact location of the state capital, other cities, state boundaries, neighboring states and oceans, and many more. Hawaii’s most prominent cities are Honolulu, Pearl City, East Honolulu, and many more. Check out the Hawaii Cities Map for more details.

Check out the National Parks in Hawaii Map to get a clear idea about the locations of different national parks, monuments, preserves, etc.

FAQ #2: What Is The Capital Of Hawaii?

Ans: Honolulu is the capital of Hawaii.

Ans: Hawaii is known for beautiful beaches covered with white, pink, red, green, and black sands. Some of the most excellent beaches are Kaanapali Beach (Maui), Ko Olina Beach (Oahu), Poipu Beach (Kauai), and many more. Hawaii is also famous for 750 miles (1,207 km) of pristine coastline. Rich cuisine, hula dance, and traditional Hawaiian parties called Lūʻau are the other famous things of Hawaii.

Ans: Yes, snowfall takes place on top of the highest peaks (above 10,000 feet or 3,048 m) in Hawaii’s Big Island and Maui. Most of the snowfall occurs on Haleakala, Mauna Kea, and Mauna Loa, the three tallest volcanoes in the state.

FAQ #5: Who Is The Governor Of Hawaii?

FAQ #6: What Is The Population Of Hawaii?

Ans: Hawaii’s population in 2022 is estimated to be 1.43 million, making it the fortieth populous state in the United States.

FAQ #7: What Is The State Bird Of Hawaii?

FAQ #8: When Did Hawaii Become a State?

FAQ #9: How Many Counties Are In Hawaii?

Ans: There are five counties in Hawaii and they are Hawaii, Maui, Niihau, Kauai, and Honolulu.

FAQ #10: What is the Largest College in Hawaii?

Ans: The University of Hawaiʻi, Mānoa, is the largest college in the state of Hawaii. It is also Hawaii’s oldest college.