The flag of Anguilla comprises a Blue Ensign with the British flag in the upper left and the coat of arms of Anguilla in the lower right corner. 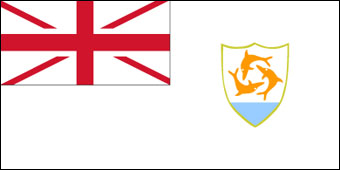 Download Picture of Blank Anguilla Flag For Kids to Color

The current Anguilla flag was officially adopted on May 30, 1990. This is the country’s fifth flag since 1957. The Anguillan flag is designed in blue with a British Union Jack flag in the top left corner and a shield on the right side. The coat of arms is on the lower right-hand corner of the flag. It consists of three orange dolphins on a white background with blue water beneath.

The dolphins stand for friendship, wisdom, and strength.

The country uses the British Flag in its flag, as it is a dependent territory of the United Kingdom.