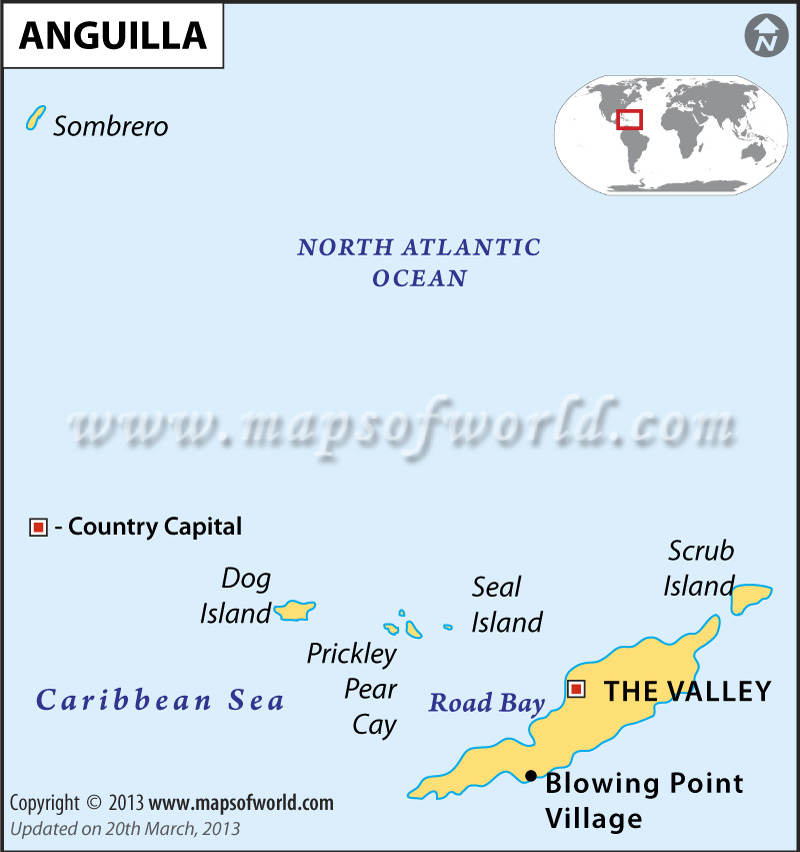 The island of Anguilla was inhabited by Arawak-speaking Amerindian tribes some 4000 years ago. They migrated from South America and some archaeological findings of Native American Indian artifacts found on the island date to as far back as 1300BC.

There are some sources that say Christopher Columbus sighted the island during his voyages to the New World in 1493. Such sources also say that he was the one who gave the island its name of Anguilla, which sounds similar to the Spanish word for eel, since the island is shaped like the water snake.

In 1650, the island was formally colonized by the English who came from the nearby island of Saint Kitts. However, in 1665, the settlement was wiped out by neighboring island tribes.

In 1666, the island was temporarily taken over by the French but was given back to the British through the Treaty of Breda the following year.

During the rest of the 1600’s, many Europeans who lived on nearby islands migrated to Anguilla, bringing with them African slaves and setting up plantations.

In 1824, Anguilla came under the administrative control of St. Kitts and in 1967, was incorporated into the unified dependency state called Saint Christoper – Nevis – Anguilla. However, locals who lived in Anguilla opposed joining the unified state and this led to the Anguillian Revolution that began in 1969, with the aim of separating from the union and returning to become a British territory.

In 1971, the British gained authority of the island but it wasn’t until 1980 that Anguilla became a separate dependent territory.

The main island is flat and low-lying and the land consists of coral and limestone.

Anguilla is a sovereign state and overseas territory of the United Kingdom. It is an internally self-governing territory that works in the framework of a parliamentary representative democratic dependency.

Anguilla’s head of state is the head of the British monarch, who is represented in the state by the Governor.

Anguilla’s head of government and head of a multi-party system is the Chief Minister, who is appointed by the Governor. He is chosen among the member of the House of Assembly.

Tourism is Anguilla’s biggest contributor to the economy. The island territory is famous for its beautiful beaches and friendly people.

With a total of 33 beaches, there is every kind of beach for every kind of traveler. The Shoal Bay East is the most popular and most visited in Anguilla, making it the best beach for people-watching. The Meads Bay Beach is a 1 1/2km white sand beach that’s known for its luxury villas, upscale restaurants, and excellent resorts. Rendezvous Beach is another popular tourist spot in Anguilla. It is popular among families for its 4-km white, powdery sand, and calm, shallow waters.

The smaller islands and cays offer perfect spots of scuba diving and snorkeling. The most popular are Sandy Island, Prickly Pear, and Anguillita. These islands are also excellent for kite and wind surfing.

The economic, political, geographic, and commercial capital of The Valley boasts of a number of buildings with colonial architecture. The most popular is the Wallblake House, which was a plantation home built in 1787. This complex of buildings remain intact and offers exhibits and tours.

Education in Anguilla is compulsory and free for children ages 5 to 17. The system is largely based on the British model.

Anguilla values its people’s education and it’s evident in its 95% literacy rate. The government has also collaborated with UNESCO to develop programs that aim to raise educational achievement, improve access to special education, and provide training to its teachers and school administrators.