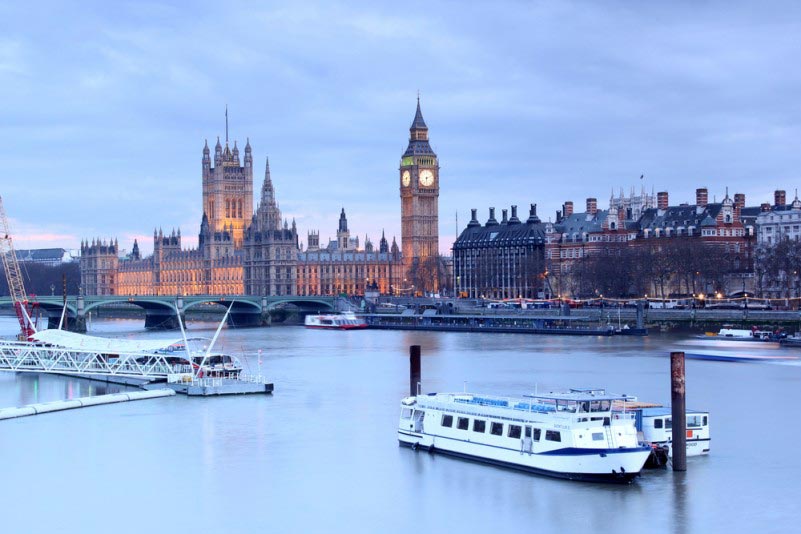 The River Thames at London, England

The River Thames has a played pivotal role as far as the development of London from its nascent stage to a city of stupendous dimensions is concerned. In the medieval past, London was one of the most famous cities, and it amassed its riches from the ships, which travelled across the world and returned to lay anchor at the London Port.

Whether you travel up or down the river in any of London’s many river cruises, you are guaranteed a breathtaking trip. A bewildering array of cruises are available ranging from city cruises, catamaran cruises, circular cruises, etc., to name just a few. Take for instance, the catamaran cruises, which offer both circular as well as point-to-point trips. The circular cruises on the other hand depart from the Embankment pier to St. Katherine’s pier with halts at several places en-route and you have the opportunity to explore the tourist landmarks nearby.

The water sport of rowing which became very popular in the early 1800’s meant that rowing clubs started mushrooming in and around London’s River Thames and Regattas became a much sought after event. The renowned Henley Regatta which dates back to 1839 is one of the most popular events in UK which is held every year in the month of July. Apart from rowing, punting and sailing too have became popular hobbies as far as the River Thames is concerned.

Another place worth visiting is the rather interesting River and Rowing Museum located at Henley-on-Thames. There is a museum with a fine collection of historic artifacts. You will be mesmerized by the innovative manner in which the museum portrays the historical significance of the River Thames and the evolution of the sport of rowing.

Although the museum showcases the significance of Henley and not London as such, it is worth every penny visiting the Rowing Museum. The presentation of the River Thames through a video show which in fact was recorded aerially from a helicopter familiarizes visitors with the River Thames from its source to the sea.

The contribution of the River Thames to British folklore is immense and innumerable writers, poets and musicians have depicted the manifold features of this great river through their works of art, be it novels, short stories, poems, and songs.

What is life without the sublime and finer things? River Thames has served as the platform for some of history’s most astonishing and grandiose water shows. One of the most enduring river festivals is the Dogget’s Race, which is celebrated even now by the boatmen of the River Thames in honor of Thomas Doggett who had instituted this race, way back in the year 1751. The race is held every year on 1st August.

The Kings and noblemen of England built their grand castles and forts along the Thames riverbank, many of which can be visited even today.

Where is River Thames?

The River Thames is a river flowing through the southern part of England. It is the longest river in all of England and the second longest in all of the United Kingdom. While famous for the portion that flows through central London, the river also flows around several others areas such as Reading, Henley-on-Thames, Kingston-upon-Thames, Windsor, and Richmond.

Summer is generally considered the best time to visit the London area. However, the Mayor’s Thames Festival held every September is not to be missed.