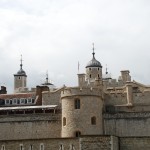 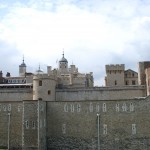 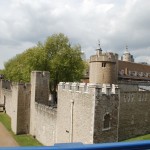 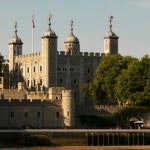 The Tower of London, also known as “Her Majesty’s Royal Palace and Fortress”, a royal palace made up of a complex of several buildings, was built as a place to protect and control the city of London. The Norman military architecture was built by William the Conqueror, and has expanded over history. The complex consists of several buildings including the White Tower, and is surrounded by defensive walls and a moat.

The Tower of London is an important landmark in England, UK, which known for several features. Perhaps the most famous of these features is that the Tower of London houses the Crown Jewels in its Jewel House. The Crown Jewels includes many symbols of royalty, including a collection of crowns, scepters, swords, and rings. These historical items are kept well-guarded in the tower, after their theft (and later recovery) from Westminster Abbey in 1303. During its initial years, this grand palace also served as a royal residence. The palace is guarded by the Queen’s Guards, notable for their distinctive uniform with a red coat and tall black hat.

In its early days, the section of the Tower of London known as the “Bloody Tower” was also used as a prison, and its most famous former inmate was Sir Walter Raleigh. During the 16th and 17th centuries many personalities who fell into disgrace, including Elizabeth I before she was crowned, were imprisoned in this tower.

They layout of the Tower of London constitutes three wards viz. The White Tower, the innermost ward and the outer ward. The White Tower was the strongest structure often used for accommodation of the king or the ruler. There is St John’s Chapel inside the White tower. The innermost ward towards the south of the White Tower has timber buildings. The outer ward was created during Edward I’s extension to the Tower. A narrow enclosure was created to encircle the castle.

There is an interesting myth about the large crows or ravens at the Tower of London. According to the myth “If the Tower of London ravens are lost or fly away, the Crown will fall and Britain with it”. Apparently the ravens have been at the Tower since the time of King Charles II. At present there are 7 ravens, who are looked after by an official titled the Raven Master. The ravens are the biggest tourist attraction at the tower, second only to the Crown Jewels. 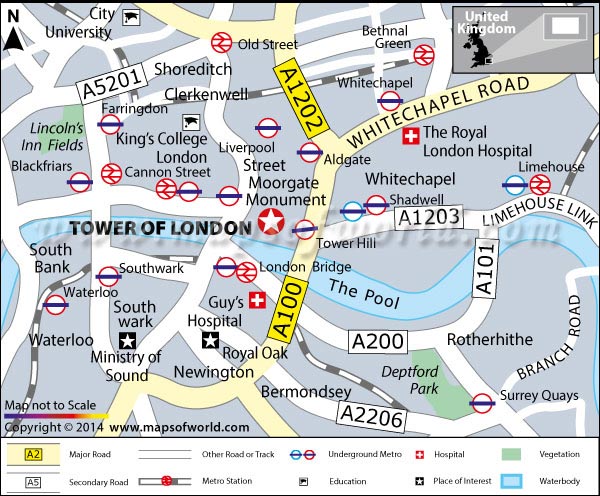 Location Map of Tower of London

Where is Tower Of London?

The Tower of London’s location was carefully chosen as a post to protect the city. The complex is located along the north bank of the River Thames in central London, which is in the borough of Tower Hamlets.

London weather is frequently overcast, but usually manageable. Tourists during December and January are sometimes met with snow which can inhibit sightseeing and travel. Summer is a better bet, with more hours of daylight and warmer temperatures.

During winters the opening time is the same, but the closing time is 4:30 pm with the last entry at 4:00 pm.

The Tower is closed from 24th to 26th December and 1st January.

More about Tower Of London