France's latitude and longitude is 46° 00' N and 2° 00' E . Below is the map of France showing major towns, roads, airports with latitudes and longitudes plotted on it. 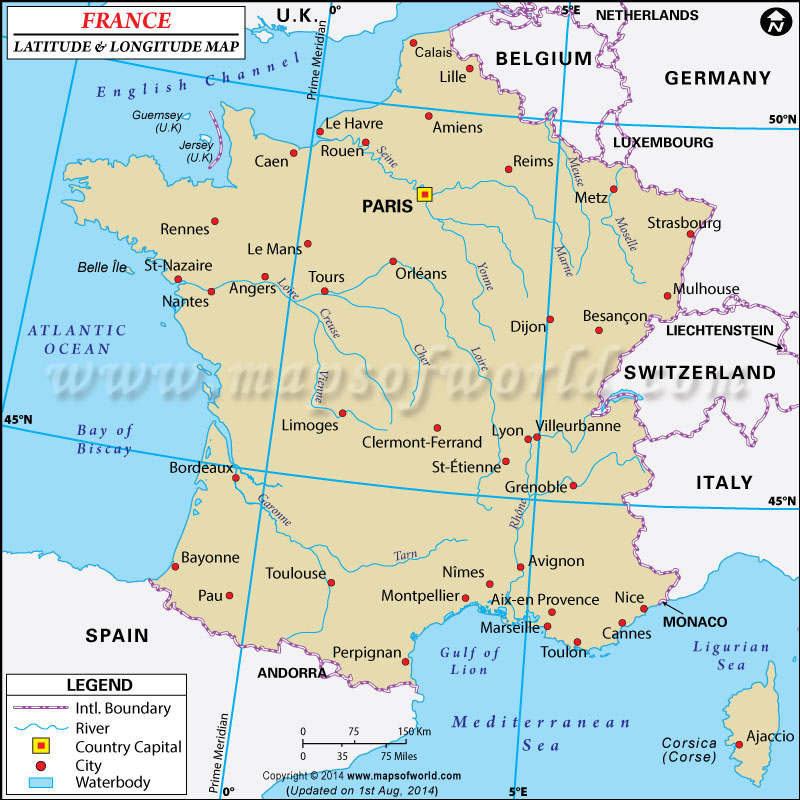 The French Republic is located on the geographic coordinates of 47.0000° N latitude and 2.0000° E longitude in Europe.

The Latitude and Longitude of France is 46°00'N, 2°00'E respectively. The French Republic has 26 administrative regions and 341 arrondissements.

The capital of France is Paris and its geographical coordinates are 48°52'N and 2°19'E respectively. Marseilles is another major city in France; having the Latitude and Longitude of 43°17'N and 5°22'E. France covers an area of 547,030 sq km and has a population of 63,713,926 according to the latest reports.

Due to its geographic location, France has a temperate climate. Northern France has cooler winters and mild summer while the coastal areas have mild winters and warm summers. The climate of France is typically characterized by the dry northwesterly wind known as the Mistral. The French terrain is constituted of mountainous areas, low lying plains and hilly areas. The Pyrenees lies to the South while the Alps lies to the east. The highest peak is the Mont Blanc with a height of 4,807 m.