Map of France with Cities 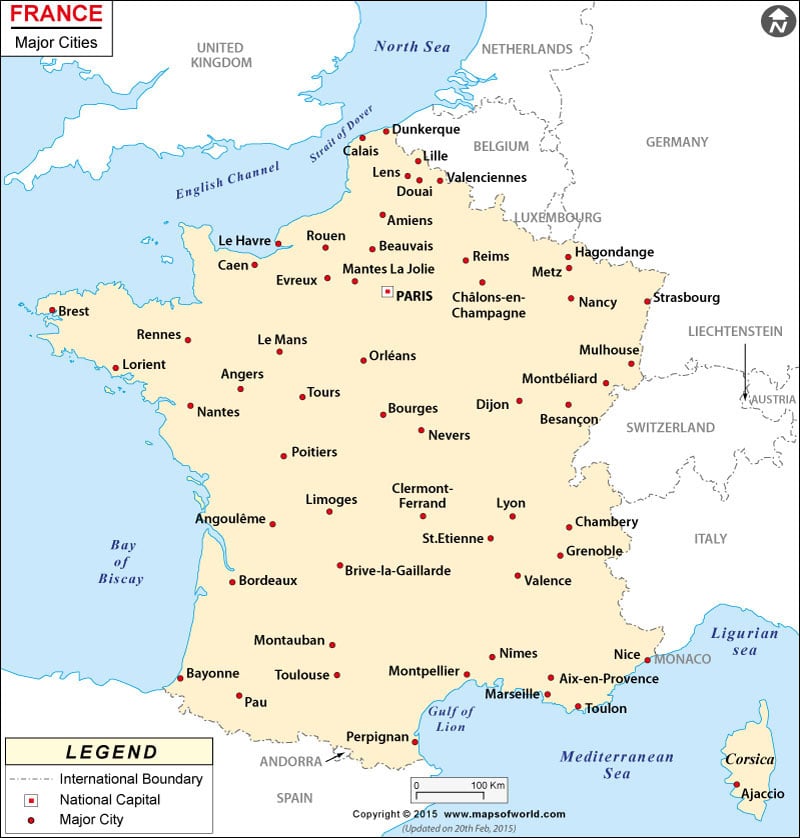 Some of the major cities in France are Avignon, Bordeaux, Cannes, Dijon, Le Havre, Lille, Limoges, Lyon, Marseille, Montpellier, Nancy, Nantes, Nice, Orleans, Paris, Toulouse, and Strasbourg. Paris is the capital of France, as well as the largest city in the country with a population of over 2 million, and a metropolitan area population of over 12 million. Paris covers an area of 105 square kilometer. Paris is one of Europe’s most important cities, a cultural capital.

Aix-en-Provence is another popular city of France, where renowned painter Cezanne lived and painted. Another interesting fact about the city is that it is built on hot springs. Amiens is known as the Picarde capital of France, and is home to the Gothic Cathedral. Avignon is often referred to as the City of Popes. The most popular architectural structure of the city of Avignon is the Palace of the Popes.

Bordeaux is known worldwide as the world’s wine capital, with a rich history of wine production since the eighth century. Bordeaux is home to about 1,17,000 hectares of vineyards, including some of the best in the world, like Vosne-Romanee and Gevrey-Chambertin.

Dijon has served as the capital for the dukes of Burgundy. Grenoble is the intellectual and economic capital of the Alps, which has been developed into a major scientific center. It excels in fields such as Physics, Computer Science, and Applied Mathematics.

Lille is another major city of France, as the capital of the Nord-Pas de Calais region. The city has large coal deposits. Lille is known as the Manchester of France because it is home to France’s largest university student population.

Mulhouse is the second largest town of Alsace. The city has a well developed automobile industry. Peugeot’s Mulhouse factory is the largest employer in Alsace. Nancy is a city that emerged as a major center of the Art Noveau style of the twentieth century. One of the most beautiful French cities is Toulouse. It is the fourth largest city of this European country and is home base of the aerospace industry.

The National Day of France

The National Day of France