home > Where is France
Map of France

France, formally the French Republic, apart from its mainland comprises many overseas territories under its jurisdiction such as French Guiana in South America, Martinique in the Caribbean, and Mayotte in… 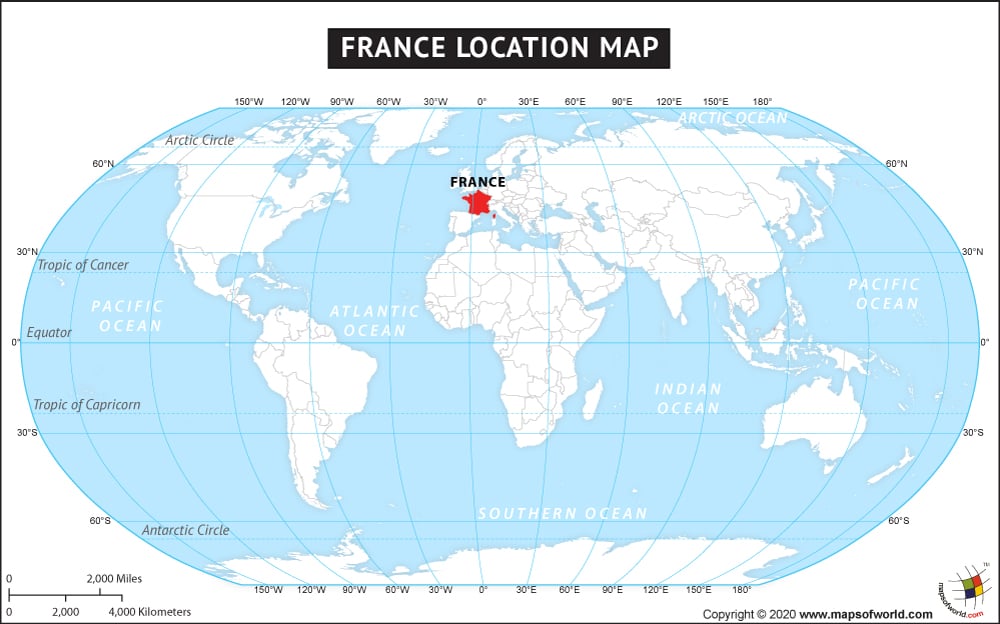 Description : Map showing the location of France on the World map.
0
FacebookTwitterPinterestEmail

France, formally the French Republic, apart from its mainland comprises many overseas territories under its jurisdiction such as French Guiana in South America, Martinique in the Caribbean, and Mayotte in the Southern Indian Ocean etc.  France is located at the western side of the European continent. It is bounded by the English Channel in the north and northwest. Bay of Biscay (Atlantic Ocean) in the west and the Mediterranean Sea in the south. The land boundary of the country is shared with Switzerland and Germany in the east, Italy in the southeast, Belgium and Luxembourg in the northeast.

Spain and Andorra shares the boundary in the south. Francs like Spain and Morocco has both the Mediterranean Sea and Atlantic Ocean coastline.  France covers a total area of 643,801sq.km making it the forty third largest country of the world. The total area under Metropolitan France is 549,970sq. km. The Metropolitan France spread between 41° to 51°N latitudes and 6°W and 10°E longitudes.  The beautiful city of Paris is the capital and largest city of France as well as it is a tourist’s paradise. The city attracts thousands of visitors every year. France is ranked as the top most tourist destination country in the world. It has 37 UNESCO World Heritage sites. France art and its cultural establishments are major tourist attractions.

The climate of metropolitan France ranges from Mediterranean in the south to temperate and mild in the north. Economically France is an industrialized country, it’s the seventh largest economy of the world.