About City Entwined between the sweltering Campi Flegrei and the sleeping volcano (Mount Vesuvius), Naples can be well termed as an echoing mass of contradictions. In fact, the city is… 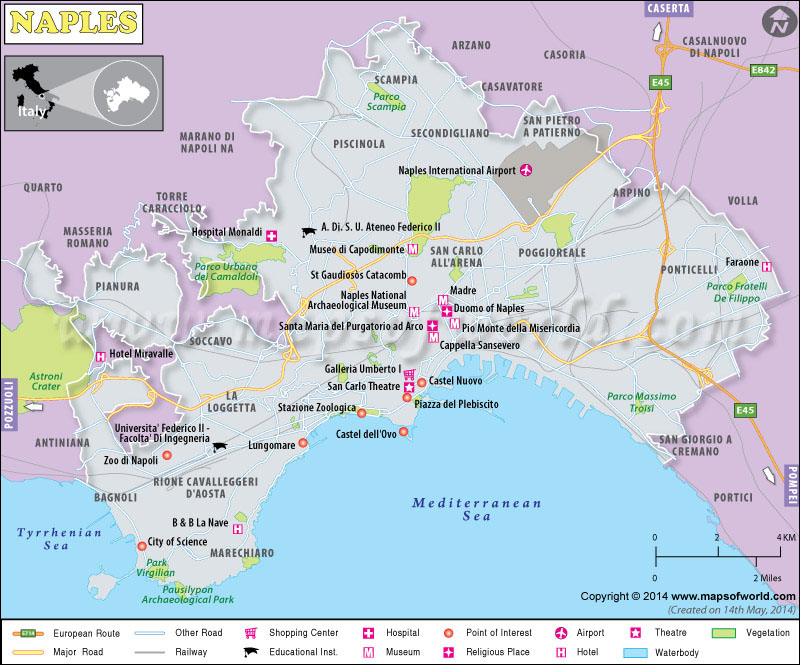 Entwined between the sweltering Campi Flegrei and the sleeping volcano (Mount Vesuvius), Naples can be well termed as an echoing mass of contradictions. In fact, the city is noted for its set of extremes. While the smudged streets hit the smoothly fringed boulevards,

on the other hand one will find the collapsing facades hiding the baroque ballrooms. While some of the attractions will remind one of the dusty Tangiers, the others will bring memories of Paris.

Naples is the capital of the Campania region in Italy and is the third biggest municipality of the country after Rome and Milan. The city is located to the western coast of Southern Italy on the Gulf of Naples. It is surrounded by Almafi coast (that comprises stony coastal cliffs as well as formations like stacks, caves, arches, and coastal valleys) and Sorrento to the south. Also, the port towns of Baia and Pozzuoli, which were a part of Portus Julius, the navel facility of Rome, lie to the northern part of the city.

How to reach (Transport)

By Air: The city is served by the Naples Airport, also called as Capodichino Airport. After arriving at the airport, one may take a bus to reach the desired destination.

By train: The major station is Napoli Centrale-Piazza Garibaldi Station, which is well connected to the Naples subway.

By boat: Close to the Piazza Municipio, we have the cruise ships dock at Stazione Marittima. One can choose services from MedMar Group and Tirrenia Navigazione and avail their large ferry ships.

By car: The city is connected by the A1 highway with Rome and it will take about two hours to reach the same.

By bus: There are several international and national bus services that operate in the city, with halts at Piazza Municipio or Piazza Garibaldi.

The city sizzles in the months of July and August and one can expect the humidity levels to go high during the same. However, the heat is considerably bearable on the coast and islands. Autumn and spring are generally pleasant and warm, but may experience heavy showers, chiefly in the months of March, April, and September. Usually, the months of March and October make a good time to plan for an island tour. On the other hand, the weather is generally crisp from November to February.

On a trip to Naples, some of the must see attractions include: