Find Bari Italy Map with attractions, roads, and other landmarks marked prominently. Bari, the capital city of Apulia, is famous for its historical monuments. It is the second most economic center of the Southern Italian peninsula. 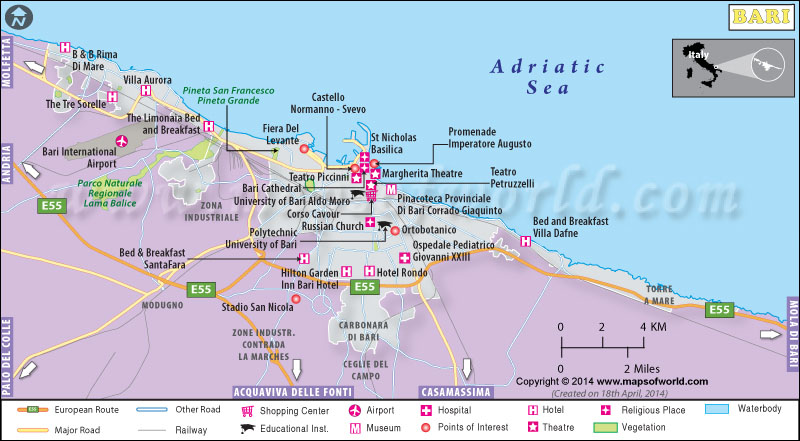 Bari is the capital city of Apulia, often referred to as Puglia. The city lies beside the Adriatic Sea in Italy. Bari in Italy is famous for the ports and the universities. It is a strong economic center in southern Italy.

Murattiano is noted as the modern part of the city which is built on a rectangular plan and juts out into the sea, this part is also the major shopping destination in the district. Along this part of the city there lies the developed form of the old suburbs, which lies along the roads.

Bari also has an airport that has been renovated and developed and is known as Karol Wojtyla Airport, this airport connects Bari to all major destinations in Europe.

Today Bari thrives as a modern city with industrial developments. Bari still has many places which are left uninvented and not explored. The places of interest in Bari are the Basilica of Saint Nicholas, the Cathedral of Saint Sabinus, the Petruzelli Theatre, and the Castle of Normanno Svevo. The people of Bari are open-minded and carry with them the legacy of Saint Nicholas. Bari is famous for its crude dialect and Italian culinary expertise.