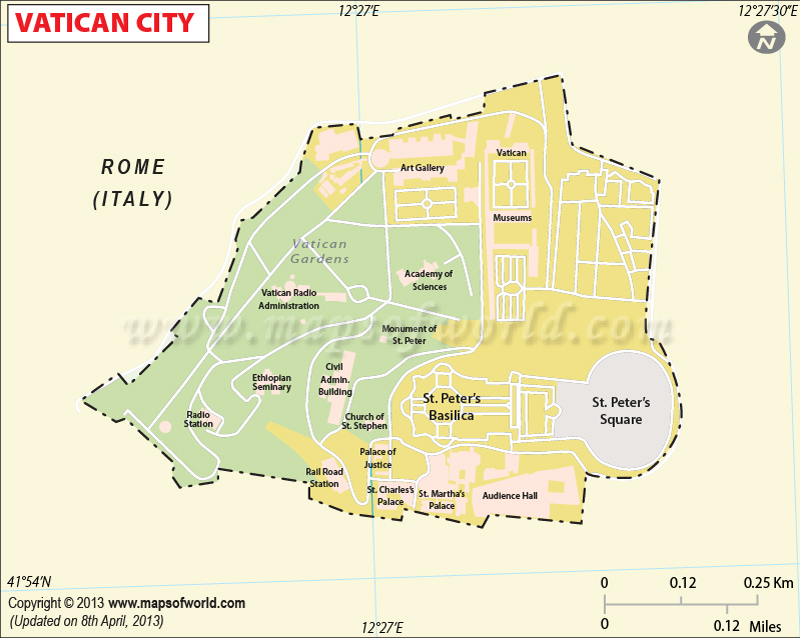 The Vatican City is the last remaining Catholic state; and also the only state in the world which has a religious purpose.

Economy of Vatican City : having no economy as such of its own, the Vatican City rakes in revenues out of printing, coins, medals, postage stamps, tourism, worldwide banking and financial activities.

Physical Map of Vatican City : The Vatican City is a small enclosed place in the northwest region within the capital of the country of Italy. It is ensconced in the not so high Vatican Hill in Rome. The river Tiber lies some hundred meters east of it.

Flag of vatican city the flag of the Vatican City is A square flag divided into two vertical halves – the one on the left is yellow and the one to the right is white. The white half of the flag sports the emblem of the Holy See. It comprises of two keys, one gold and the other silver – representing the keys of St. Peter to the gate of heaven. On the keys is mounted the papal crown; the keys serve as a prop. The keys are bound together by a red rope.

Climate of Vatican City : being located within Italy, it shares the same climatic conditions as Italy. There are no extremes in temperature; the temperature is moderate and Mediterranean, with mild and wet winters and dry summers. The summers are between May and September and the winters stretch from September to May.

Flora and Fauna of Vatican City : the Vatican City is mainly an urban place, better known for its treasury of art and sculpture. In fact, it lacks any forest terrain. However, there are several gardens in the city which have a wide collection of exotic flowers and other plants. The orchid is one of the types of flowers that are not just abundantly found, but also found in various types. Being primarily a city, the Vatican City does not possess any fauna.

Arts, Culture and Music of Vatican City : though relatively tiny in area, the Vatican City oozes with culture. In fact some of the world’s finest and rarest paintings and sculpture are to be found within the Vatican City. There is the St. Peter’s Basilica, the Sistine Chapel which apart from being religious monuments also doubles as treasure troves and museums. Botticelli, Bernini and Michelangelo are some of the names whose works are to be found in abundance. There is also huge a library in the Vatican City which houses rare and priceless books which hold scientific, historical and cultural value.