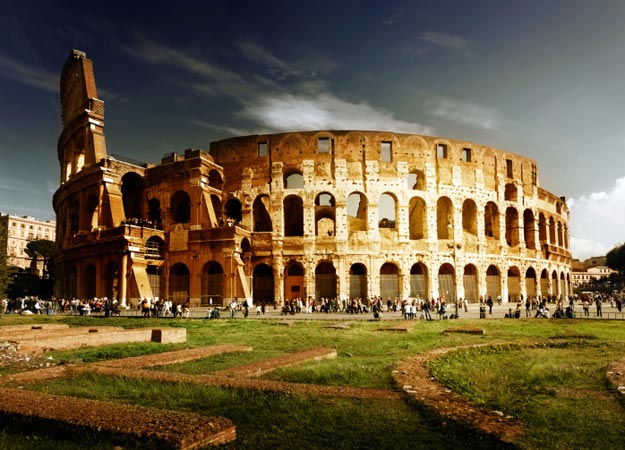 They say as long as the Colosseum stands, so will Rome and rest of the world. Commissioned in AD 72 by Emperor Vespasian, it’s a massive three-tiered Roman amphitheater. With its ellipse-shaped architecture resembling Dante’s circles of hell, this gladiatorial arena is irrefutably one of the most iconic edifices of ancient Rome. Officially called the Flavian Amphitheater, the 50,000-seat arena has been the cynosure of celebrations, ceremonies, combats, and sporting events.The Colosseum is an amphitheater located in Ancient Rome. Although other similar amphitheaters were constructed around this time, the Colosseum was the largest ever built. Commissioned by the Emperor Vespasian, the monument was completed by his son Titus.

The place on which it was constructed was actually the site of Nero’s palace. A huge bronze statue of Nero was set near the monument in the second century A.D. The Colosseum has around 80 arched entrances. It was used as a venue for entertainment, including battles of the gladiators, animals, and public executions.

The arena had a huge wooden floor coated with sand. The subterranean passages were composed of a series of tunnels that were used for the entry of the wild beasts used in the fights in the arena. Some of the tunnels were also used to store equipment used during the fights.

The slaves, prisoners of war or sentenced criminals generally became Roman gladiators. A majority of them were male. All people irrespective of their class, whether rich or poor, attended these combats. Even the Emperor frequently attended these fights. So many contests were held in a single day that if the ground got drenched with blood, fresh sand was poured over the surface and the fights carried on.

As gladiators fought, vicious cries and curses were heard from the audience around the Roman Colosseum. These games were put to a halt when Christianity progressively influenced the rulers to stop the parts of the contests which involved loss of human life.

The structure has become an icon of Rome, and is visited by tourists from around the world. Many visitors take guided tours inside the Colosseum to learn about the events that took place there. 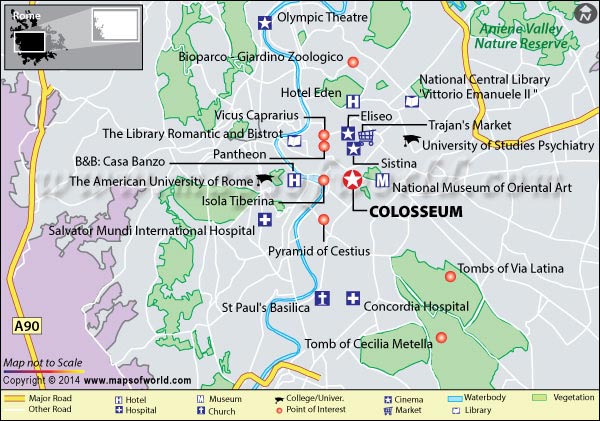 Location Map of the Colosseum in Rome, Italy

Where is the Colosseum ?

Located in the center of the capital of Italy, Rome, the Colosseum is easily accessible from anywhere in the city. Fiumicino Airport is at a distance of around 31 kms from the Colosseum. The Rome Metro has a stop at the Colosseo on the B line. One tram stop and two bus stops are near the monument.

Summer in Rome is generally hot and crowded, with long lines at every attraction, including the Colosseum. Better times to visit are in Spring and Autumn, when weather in Rome is more pleasant, and the city is much less crowded.

The Colosseum has different visiting hours throughout the year. Its opening time is 8:30 am. The closing times are as follows:

You can purchase your ticket online. The adults ticket costs € 12.00. European Union members between 18 and 24 years old have to pay just € 7.50. Special passes are also available.