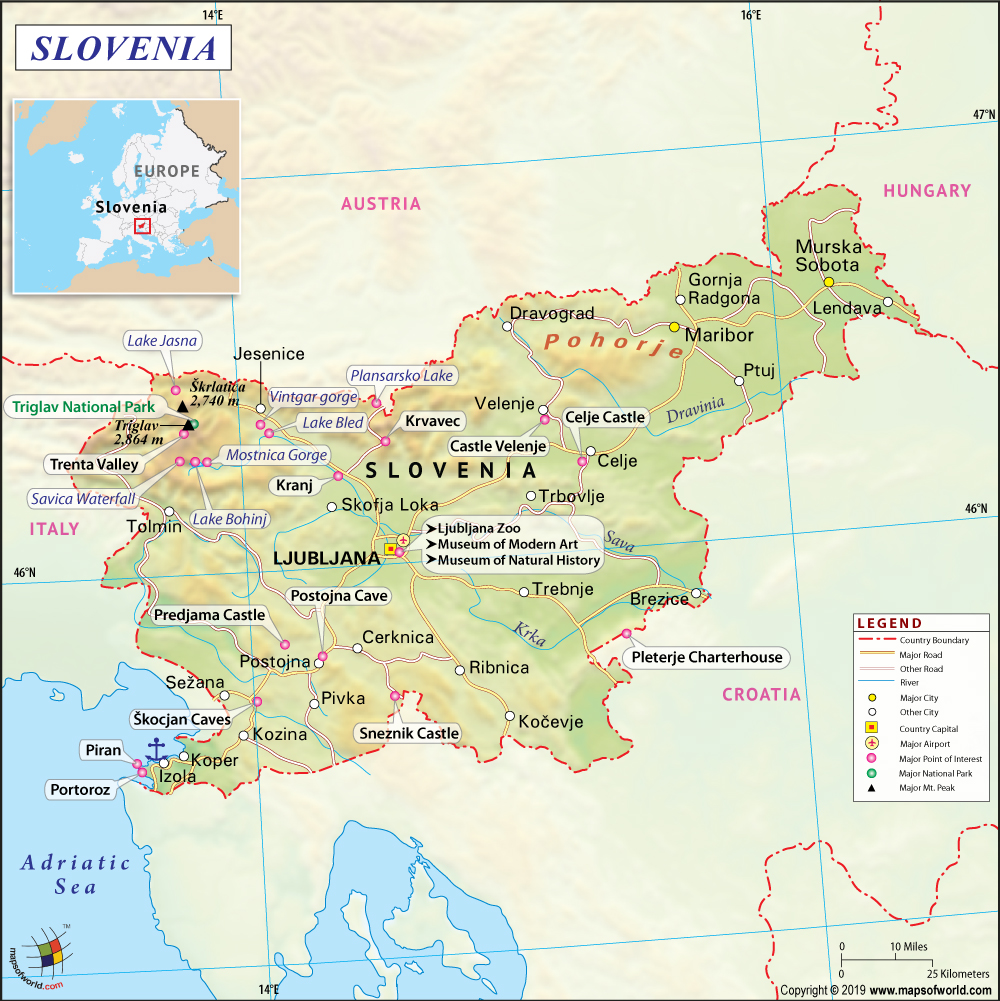 The ancestors of modern-day Slovenians were the Slavic people who came from the eastern part of Europe in 550 AD. During the latter part of the 7th century, the Slavics established the state called Caranthia, which was one of the very first Slavic states.

In the 9th century, the region came under the control of the Holy Roman Empire and was Christianized, but the people maintained some of their pagan traditions.

After the fall of the Holy Roman Empire, Slovenia came under the Habsburg dynasty, which ruled the region until 1918. This was also the year that Slovenia merged with Serbia and Croatia, creating the new south Slavic state of the Kingdom of Serbs, Croats, and Slovenians. The newly established state’s name was later changed to Yugoslavia in 1929.

After a 10-day war against the Yugoslav Communist Regime in 1991, Slovenia became an independent state in June of that year. They later became a member of the European Union and NATO in 2004.

Slovenia is located in Central and Southeastern Europe, and consists of 4 major European geographic regions, which are: the Alps, the Dinarides, the Mediterranean, and the Pannonian Plane. Its borders are Austria, Croatia, Italy, and Hungary.

For a tiny country, Slovenia has a wide range of different landscapes. Being the 3rd most forested country in Europe, Slovenia’s land area consists of a majority of hilly or mountainous regions. About 90% of the country’s land surface is at least 200m above sea level.

Slovenia is a unitary parliamentary constitutional republic. The President is elected into office by popular vote and serves a 5-year term with a maximum of 2 consecutive terms in office. The President is head of state, commander in chief of the Slovenian Military Forces, and mainly serves a representative role.

The Legislative power is exercised by the bicameral Parliament – with the National Council as the Upper House, and the National Assembly as the Lower House.

Executive and Administrative powers are exercised and held by the government of Slovenia, which is headed by the Prime Minister and the council of ministers or Cabinet.

Slovenia offers its tourists a wide range of varying landscapes. The Alpine is found in the northwest region, while the Mediterranean is to the southwest, the Pannonian in the northeast, and the Dinarides in the southeast. Each region offers its own unique natural, architectural, cultural, and geographic features that make each experience different from the other.

The most visited city in the country is the capital of Ljubljana – the capital that boasts of Baroque and Art Nouveau buildings. Among the most notable tourist attractions in this beautiful city are the old city center, the cathedral, the opera house, the Tivoli town park, the countless cafes on the banks of the river Ljubljana, and the Ljubljana castle that towers over the city.

For the best Mediterranean town in Slovenia, the ancient small town of Piran is the best to visit. Located along the Adriatic coast, this charming town reminiscent of Venetian architecture features houses that are huddled together and narrow winding streets. For an intimate travel destination in Slovenia, Piran is a must-visit.

Lake Bled is one of the most popular tourist attraction in the country. Found in a fairytale town in the Julian Alps, this glacial lake has an island in the middle with the Bled Castle perched on its rocks 100m above the lake. Tourists can rent canoes and paddle to the island or rent boats for large groups.

The Postojna Cave is one of the best-known caves in the world. It is considered to be a Stalactite paradise – filled with beautiful natural formations with its tunnels, halls, and galleries. Entering the cave consists of riding a train – making it a truly unique and exciting experience.

Slovenia’s adult literacy rate is at 99.6%. Out of all students who enter primary level, 98% of them proceed to secondary school, where 84% of those who finish proceed to higher education.

Some Facts to Know about Slovenia

What is the structure of government in Slovenia ?

Slovenia is a Parliamentary democratic republic. The President is the head of state, who is elected in direct general elections. He is chosen for five years and at the most for two continuous terms.

What is the best time to visit the country ?

The temperatures soar to the 30s in the months of July and August but the northern part of the region is a lot cooler experiencing a drop of 10 degrees which make it ideal for trekking and taking a walk in the mysterious landscapes. Summer is an extraordinary time to visit the country. Numerous people like to tour in the cool of the morning, or take a swim in the watering openings around the nation.

Another splendid time to visit the place is during autumn. From September, the temperature drops down to 20 degrees and the waters are still warm enough for a dip.

If you are lover of winter sports then Slovenia is a must visit during winters. Skiing is the major attraction here and does good trade during this season.

What are some amazing facts about Slovenia ?

The most amazing fact about this region is that if you ever take a close look at the map of Slovenia, you will see that the region is shaped like a chicken.

The mountain area of Slovenia stretches to about 7000 kilometers, with around 165 mountain huts and small shelters. The experience of traveling through these mountain trails is mind blowing wherein you can really explore the natural beauty of the region. The small rest areas which are located at different locations give you ample time to indulge yourself during this beautiful journey.

The second largest city of Slovenia, Maribor, has to its credit the oldest grape vine in the world which is around 400 years old. The Triglav national park is the only national park in Slovenia. This park is situated amongst the Julian Alps which makes it all the more beautiful and natural. Unlike other landscape parks, this park is protected strictly from any kind of construction to promote tourism.

Slovenia is also a second home for some of the world’s best caves. Every year new caves are discovered and till date some 8000 caves have been discovered in this region. The Postojna cave is the biggest and the most visited cave in Slovenia. It is spread over 20 kilometers with galleries and passages to view the beauty of nature.