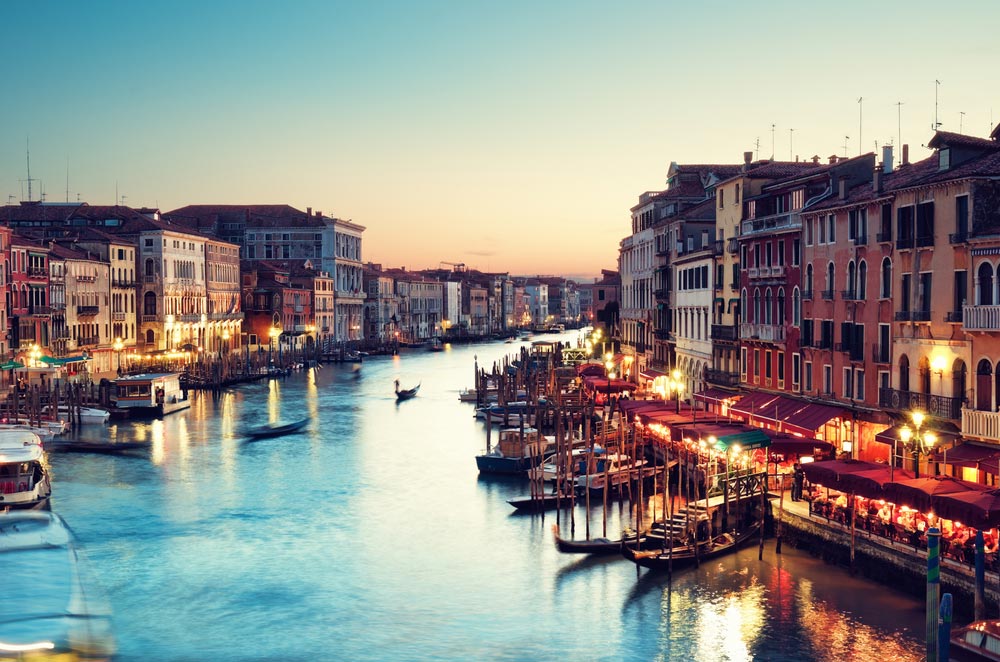 Grand Canal (Cannalasso) – The largest canal in the city.

Venice, capital city of Veneto is a unique place with its own charm. Every monument and place in this city has history. Venice is known as the City of Water because of its canals and the best way to appreciate the history of the region is to understand the canals. There are over 150 canals which are the main means of transportation throughout the city with the largest one being the Grand Canal with four bridges spanning it. It’s known as Venice’s most important “street” and tourists get the chance to learn more about the Grand Canal while riding through it. Some of the bridges such as the “Bridge of Sighs” are quite famous.

These canals can experience heavy traffic given that they are a major means of transportation in Venice but the boats are large enough to let you sit comfortably allowing you to take photographs and listen to your guide. Although industrial pollution has reduced in the recent years, the water in these canals remains filthy. This is also the reason for the constant maintenance that is regularly done on them. Despite this fact, the canals of Venice are one of the top attractions in Europe and there’s no better way to experience the beauty and uniqueness of this city than to ride through the canals. Gondolas, the traditional Venetian rowing boats that used to be extremely common in Venice are now used for rowing races as well as to carry tourists on rides. Hence, these famous handmade boats have become more of a tourist attraction rather than a major means of transportation in Venice. Apart from experiencing this exclusive ride , tourists are also recommended to explore the diverse cuisines of Venice and try
some of the local dishes such as Baccala’ Montecata during their trip.

A lot of people are aware that Venice is also famous as being one of the most romantic cities in the world. The New York Times once called it undoubtedly the most beautiful city built by man. The uniqueness, mystery as well as beauty associated with Venice makes it worthy of being added to everyone’s bucket list.

Venice is located in northeastern Italy on the border of the Adriatic Sea and is built on about 118 small islands. It is the capital city to Veneto and is one of the larger cities in the country.

Winter in Venice can get really cold and average temperatures from December to February range from -1 degree Celsius to 6 degree Celsius. There is also a lot of fog in the city during winter months. The city gets hot and humid in the summer and high season is from April through October.