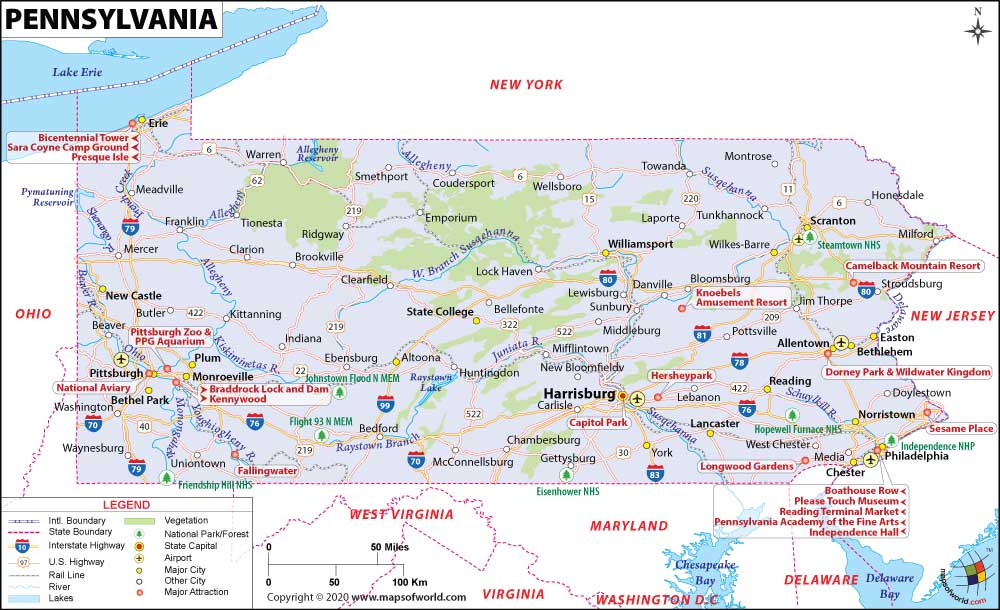 Explore this map of Pennsylvania, officially known as the Commonwealth of Pennsylvania, a state situated in the northern and Mid Atlantic regions of the US. It is the 33rd largest, sixth-most populous, and the ninth most densely populated state in the county. This detailed Pennsylvania map lets you explore the overflowing history of this great state.

The official flag of Pennsylvania consists of a blue field on which the state coat of arms is embroidered.

The state of Pennsylvania is officially called the Commonwealth of Pennsylvania. It was the second state to join the Union and boasts of being one of the original founding states of the nation. It is also referred to as the ‘Keystone State’.

Before the Europeans came to the region, several American Indian tribes such as Delaware, Boss, Iroquois, Erie, and Shawnee, inhabited the land. In the 1600s, the region was disputed between three powers – the Dutch, the Swedes, and the English – who all made claims to the land. It was in 1664 when the English took over, and an official land grant was given in 1681.

The state became the seat of the federal government from 1776 to 1800, when the US Declaration of Independence was signed in 1776, and the US Constitution was drawn in 1787. The region became a state on December 12th, 1787. The Civil War Battle of Gettysburg took place in Pennsylvania in July 1863, between Union and Confederate forces.

Pennsylvania is located in the northern Mid-Atlantic Region of the United States. It stretches 180 miles north to south, and 310 miles east to west. The state borders New York to the north, New Jersey to the east, Lake Erie and Ontario, Canada to the northwest, Delaware to the southeast, Maryland to the south, West Virginia to the southwest and Ohio to the West. It is the 33rd largest by area and the sixth most populous state in the US.

There are five physical regions in the state: Ridge and Valley, the Atlantic Coastal Plain, the Allegheny Plateau, Piedmont and the Erie Plain. At 3212 feet (979 meters), Mount Davis is the tallest mountain in the state. The Allegheny National Forest, established by President Calvin Coolidge, is the state’s only national forest.

Pennsylvania features some of the most significant monuments of America’s revolutionary history. The famous Liberty Bell in Philadelphia is a national icon of independence. The site of the Gettysburg Battlefield now holds one of the largest outdoor collections of sculptures in the world. The largest city in the state, Philadelphia, features more outdoor sculptures and murals than any other city in America.

The Philadelphia Museum of Art, Rodin Museum, Houdini Museum in Scranton, and the Carnegie Museum in Pittsburgh, are the most prominent museums in the state. The Splash Lagoon in Erie, and the Hershey’s Chocolate World in Hershey, are major family attractions. (Did you know that Wilt Chamberlain had his 100 -point game in Hersey PA?) All state parks in Pennsylvania have no admission fee and remain popular tourist haunts throughout the year.