US States Map > Map of Maryland 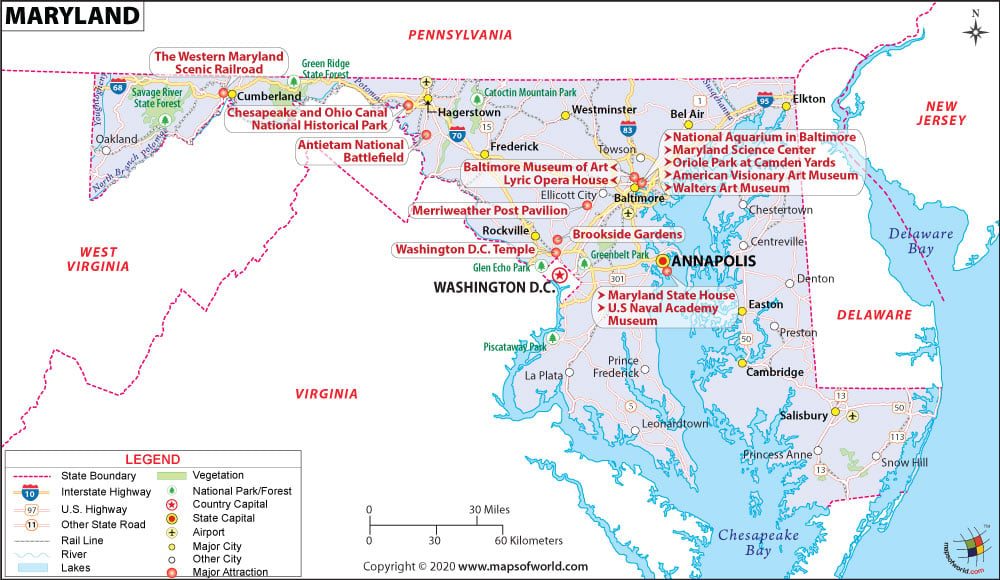 Explore the map of Maryland; located in the Mid-Atlantic region of the United States. Maryland is one of the smallest states in the United States and covers an area of 12,407 square miles. Of the 50 states of the country, Maryland is ranked 42nd in terms of area. It is the 19th most populated state in the country with a population of 6,016,447 as of 2016. Maryland shares its borders with Virginia, West Virginia, Pennsylvania, Delaware, and Washington, D.C. The capital of Maryland is Annapolis, while Baltimore is the largest city. Hoye-Crest, which has a height of 1,024 meters, is the highest point in the state. Maryland, which played a significant role in the founding of the United States, was admitted to the Union on April 28, 1788, as the 7th state.

There are a total of twenty-three counties in Maryland. The largest county in Maryland is Worcester County and the smallest is Kent County. Check this Maryland County Map which locates all the counties of Maryland on the map.

In 1632, the monarch for England, Scotland and Ireland Charles I granted a royal charter for Maryland to Cecil Calvert, Lord Baltimore and the new colony got its name from Henrietta Maria of France who was the wife of Charles I. In 1634, Lord Baltimore’s first settlers began to move to the colony. During the American Revolution, Maryland was one of the thirteen colonies that revolted against the rule of the British. Maryland was the seventh state to be admitted to the Union on April 28, 1788. The bombardment of Fort McHenry during the War of 1812 when the British made an attempt to capture Baltimore inspired Francis Scott to write the Star-Spangled Banner. The song, later on, became the national anthem of the United States. During the American Civil War, Maryland remained with the Union. The new state constitution of 1864 did away with slavery.

Maryland covers an area of 12,406.68 square miles. Maryland shares its borders with Virginia, West Virginia, Washington, D.C, Pennsylvania and Delaware. With a height of 3,360, Hoye-Crest is the highest point in the state. Some prominent mountains in the state are Sugarloaf Mountain, Maryland Heights, South Mountain, Sliding Hill, and Backbone Mountain, among others. Some famous rivers of the state are the Potomac River, Nanticoke River, Anacostia, Casselman River, Rock Creek, and others. A large number of white-tailed deer can be found in the state. Some mammals that can be spotted here are black bears, bobcats, raccoons, and foxes, among others.

Visitors can catch a glimpse of the history of America’s railroad at the Baltimore and Ohio Railroad Museum. Visited by hundreds of tourists, Antietam National Battlefield is the location of the American Civil War’s bloodiest one day battle. Assateague State Park is a popular destination for swimming and surfing and watching exotic wildlife. Other places worth visiting are Baltimore Inner Harbor, Rocks State Park, William Paca House and Garden, and Blackwater National Wildlife Refuge, among others.

Baltimore-Washington International Thurgood Marshall Airport is the main airport in the state. Rail service is provided by Amtrak which has stations in Cumberland, Aberdeen, and Rockville, among others. Some prominent Interstate Highways that pass through the state are Interstates 68, 70, 81, 83, and 95, to name a few.

Maryland is home to many prestigious universities and colleges. Some prominent ones include Johns Hopkins University, the University of Maryland, Towson University, Morgan State University, and Loyola University Maryland among others.