National Parks in Pennsylvania offers you a variable mix of national and state parks. It ranges from rich Valley Forge National Historical Park to the breathtakingly scenic Pine Creek Gorge. Many Pennsylvania national parks are designated historical sites. They offer a wide range of activities from walking trails to outdoor activities. 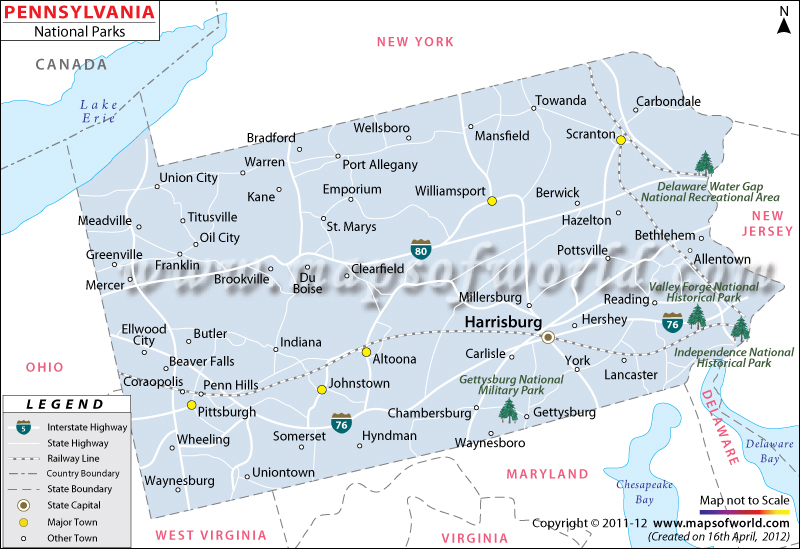 Description:Map shows the various national parks located in the US state of Pennsylvania.
0
FacebookTwitterPinterestEmail

Visit any quadrant of the state and you can find a rich diversity of national and state parks for you to explore. In the 3,000-mile (4,828 km) region encompassing the Laurel Highlands, you’ll find 5 national parks and 8 state parks.

If you are spoilt of choices and finding it tough to decide which one to visit first, let’s start with the most popular national parks in Pennsylvania. This list of top national parks in the state will help you decide where to start your journey.

Appalachian National Scenic Trail, Gettysburg National Military Park, Valley Forge National Historical Park, Delaware Water Gap National Recreation Area, and Independence National Historical Park are some of the well-known national parks of Pennsylvania. some of the well-known national parks of Pennsylvania. The Pennsylvania National Parks Map outlines the location of all the important historic, scenic and recreational zones of the state. Appalachian National Scenic Trail of Pennsylvania boasts of a pastoral and wooded landscape along with a scope for hiking. Gettysburg National Military Park takes the tourists to the days of Civil War and offers opportunities for a campfire, a walk into the battlefield, and summer ranger activities.

Valley Forge National Historical Park of Pennsylvania reminds of the Revolutionary War and is known to offer many outdoor options like boating, biking, and nature walks, among others. Delaware Water Gap National Recreation Area is intersected by the scenic Middle Delaware river and the Kittatinny Ridge in the nearby location provides hiking opportunities. Independence National Historical Park is yet another interesting site that houses the Independence Hall and the Liberty Bell Center.

How Many National Parks in Pennsylvania?

What National Are Parks in Pennsylvania