The landscape of Oklahoma is mostly a series of flat plains dotted with rolling hills and ridges. The state has four major mountain ranges: the Arbuckle Mountains, the Wichita Mountains,… 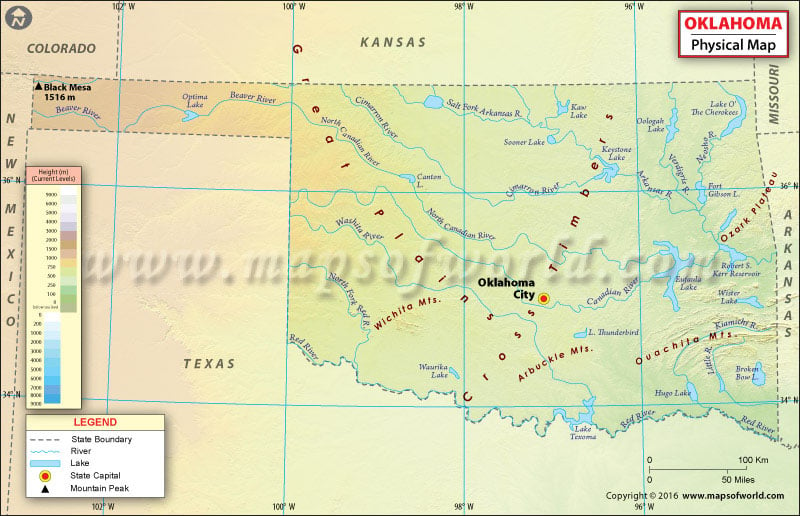 The landscape of Oklahoma is mostly a series of flat plains dotted with rolling hills and ridges. The state has four major mountain ranges: the Arbuckle Mountains, the Wichita Mountains, the Ozark Mountains and the Ouachita Mountains. The latter two make up the only significant highland region between the Rockies and the Appalachians. Major rivers in Oklahoma include the Arkansas, Canadian and Red Three rivers that empty into the Gulf of Mexico.
Northeastern Oklahoma, comprising an area of 13,247 square miles, is the largest geographical region in the state. It is made of an abundance of foliage & rolling hills and state parks and six eco-regions. Ozark Mountains and foothills contain evergreen pine and deciduous forests in the region. Southeastern Oklahoma or Choctaw Country is way more mountainous and forested than any other region in the state. It is home to the Kiamichi Mountains – an extension of the Ouachita Mountains – and the Arbuckle Mountains – the defining terrain of South Central Oklahoma. The region is home to the largest lake in Oklahoma by surface area, Eufaula Lake.

Northwestern Oklahoma features the Oklahoma Panhandle that is 166 miles long and 34 miles wide. The panhandle covers almost all of the true High Plains. Here, grasslands slowly rise into rocky mesas near the border with Colorado and New Mexico. Black Mesa section of the Rockies at 1,516 meters is the highest point in Oklahoma. Southwest Oklahoma or Great Plains Country comprises grassland and gently rolling hills that are not as dry as adjacent West Texas. The region has several mountain ranges, the largest of these being the Wichita Mountains.

Central Oklahoma or Frontier Country is one of the most tornado-prone regions in the US. The Cross Timbers in the region feature prairie and patches of forest at the eastern limits of the Great Plains. Central Oklahoma is basically a transition buffer between the wetter, forested Eastern Oklahoma and the semi-arid Western Oklahoma.