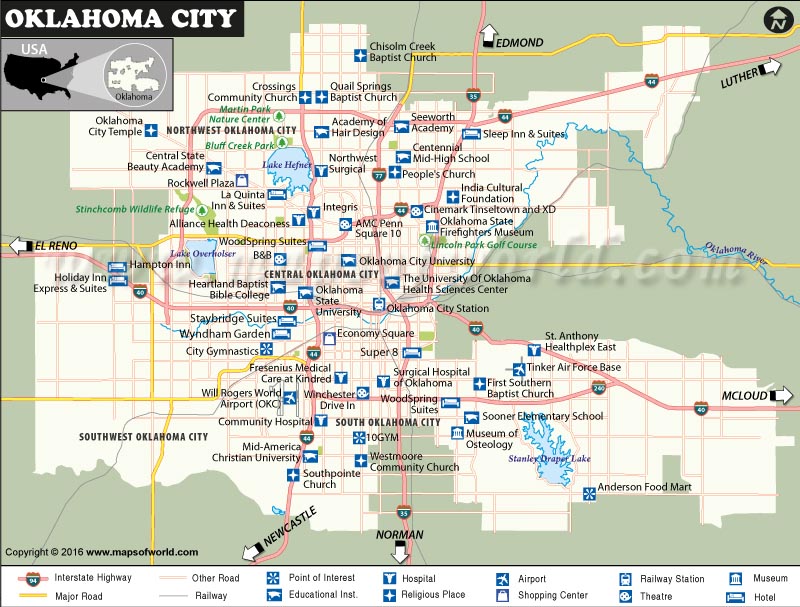 Oklahoma City is the capital of the U.S state of Oklahoma. Being the largest city of the state, Oklahoma City is diverse and growing metropolitan area. Founded during the Land Run of 1889, the city is also the county seat of Oklahoma County. It is the civic, business, entertainment and commercial center of the state. Oklahoma city is an integral point on the U.S. Interstate Network as Interstate 35, Interstate 40 and Interstate 44 pass through it. It also serves as the home for two major airports- Will Rogers World Airport and Wiley Post Airport. The city, a home to many colleges and universities, including Oklahoma City University, is known by various pet names such as Action City Renaissance City etc. It is also the worst victim of the gruesome terrorist attack in 1995.

Some of the known hotels in Oklahoma City are:

Oklahoma City is home to a wide range of bigger as well as smaller companies that contribute much to maintain the economic stability of the city. Although oil industry plays a major role in developing the city’s economic status, the city hosts numerous businesses and employers. Agriculture, energy, aviation, government, healthcare and manufacturing industry play a key role in the city’s economic well-being. The Mike Monroney Aeronautical Center and Tinker Air Force Base are major economic drivers in the city. As one of the nation’s largest processing centers for a variety of farm products, Oklahoma City is home to the world’s largest stocker and feeder cattle market. Horses are also a big business in the city. Fabricated metal, computers, clothing, oil-field equipment, crude oil, back office, distribution and food processing are the city’s other future growth industries. Motor vehicles, food products, steel, electronic devices, computers, oil-well supplies, paper products and rubber tyres constitute the main items produced in the city.

Places To Visit in Oklahoma City:

Oklahoma City is often visited by tourists from all parts of the world. The major attractions of the city include Crystal Bridge at the Myriad Botanical Gardens, Oklahoma City Zoological Park, the oldest zoo in the Southwest US and Omniplex Science Museum, one of the largest Science Centers and General Interest Museums in the country. The National Cowboy & Western Heritage Museum with full of priceless western arts and treasures entice the visitors. Oklahoma City National Memorial, which is created to honor the victims, survivors, rescuers of the 1995 terrorist attack, stands as the landmark of the city. Oklahoma City Museum of Art is yet another attraction of the city. The city gives pleasure not only to adults, but also to children with its number of amusement parks such as Six Flags Frontier City theme park and White Water Bay water park that offers numerous coasters, rides and games.