Kuwait's latitude and longitude is 29° 30' N and 45° 45' E . Below is the map of Kuwait showing major towns, roads, airports with latitudes and longitudes plotted on it. 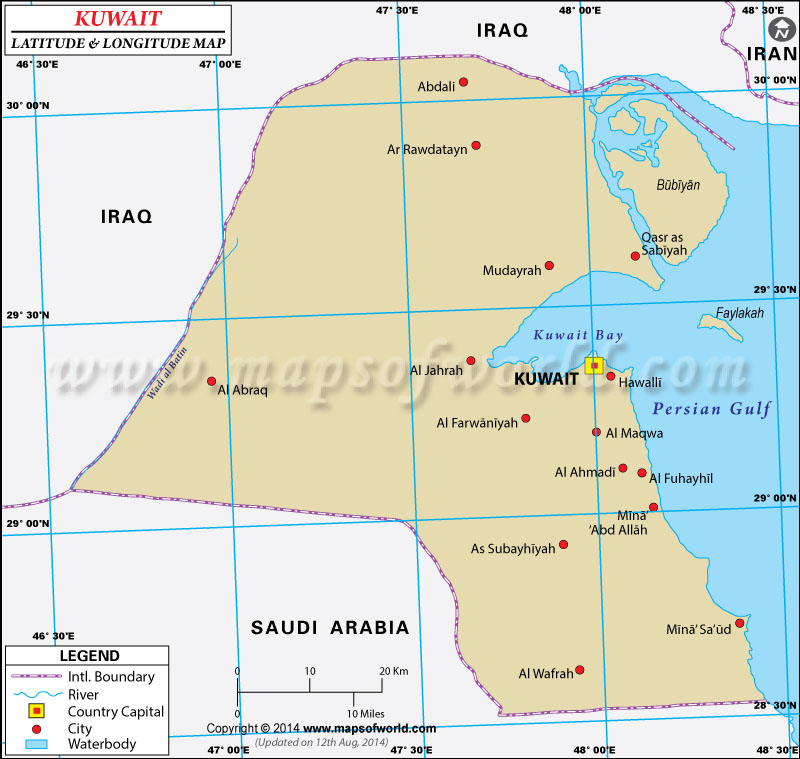 The State of Kuwait is a relatively small Middle Eastern Arabic Nationality, with the Geographic Coordinates of 29°30'N, 45°45'E.
Known as Dawlat al-Kuwayt in Arabic, Kuwait means Fortress near the Water. It is named after the Kout or castle of the royal prince of the Khaled tribe, located near the Persian Gulf. The capital of Kuwait is Kuwait City with the longitude and latitude of 29°22'N and 47°58'E. Kuwait has a total area of 17,820 sq km. This relatively small land area is blessed by its geographic coordinates with one of the richest crude oil reserves in the world. The population of Kuwait is 2,505,559 with the majority being ethnic Kuwaitis. The remaining are Arabs, South Asians and Iranians.


The latitude and longitude of Kuwait ensures a hot summer through the months of June to September. Winters are cool, wet and prone to occasional cloudbursts, through the periods of January to March. Kuwait's geographic location makes it vulnerable to Thunderstorms and hailstorms during the months of November, March and April. Sandstorms and Dust Storms are common throughout the year, especially in the period from March to August. Kuwait's terrain is mostly flat and given to desert plains.