Honduras's latitude and longitude is 15° 00' N and 86° 30' W . Below is the map of Honduras showing major towns, roads, airports with latitudes and longitudes plotted on it. 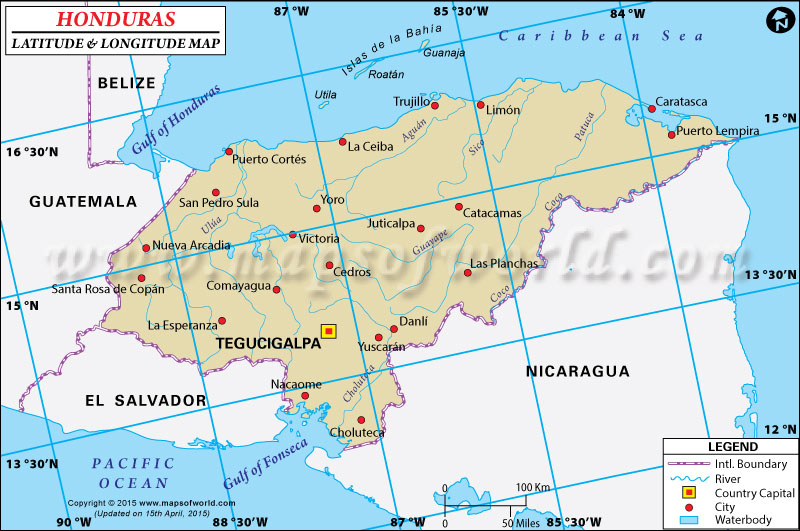 The latitude and longitude of Honduras is 15º 00' N and 86º 30' W respectively. It is located in Central America and lies between El Salvador and Nicaragua.
The total area is slightly larger than that of Tennessee. Tegucigalpa, the capital of Honduras is located on 14º 06' N and 87º 13' W latitude and longitude respectively. Honduras has 18 administrative departments under it and is one hour behind Washington DC during Standard Time. The total area of Honduras is 112,090 square kilometers with a coastline extending up to 820 kilometers. The terrain is mostly mountainous in the interior areas and Honduras has narrow coastal plains. The climate of Honduras is mainly subtropical in the lowlands and temperate type in the mountains.

The region is very prone to mild earthquakes which occur frequently and is also vulnerable to damaging hurricanes and floods along the Caribbean Coast. Deforestation, land degradation and soil erosion are the major environmental concerns of Honduras.