Georgia's latitude and longitude is 42° 00' N and 43° 30' E . Below is the map of Georgia showing major towns, roads, airports with latitudes and longitudes plotted on it. 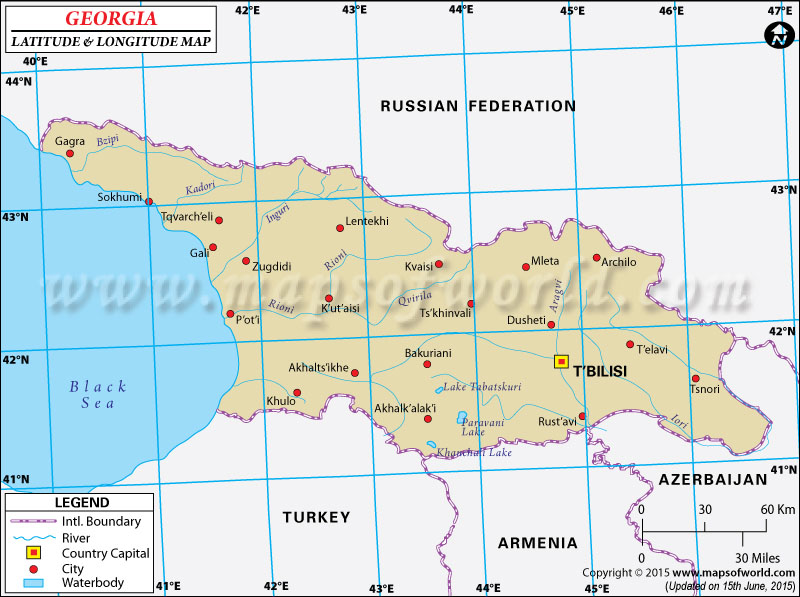 The Eurasian Country of Georgia is located by the Black Sea with geographic coordinates of 42°00'N Latitude and 43°30'E Longitude .
Georgia's capital is the city of Tbilisi with latitude and longitude of 41°43'N and 44°47'E respectively. The Latitude and Longitude of Georgia spans across an area of 69,700 sq km.

The geographic location of Georgia is responsible for the sub tropical Mediterranean type climate. The weather remains warm and pleasant through most of the year. Georgia has a mountainous terrain with a narrow strip of coastal land on the west. The Mtkvari River flows through the rich fertile plains in the east. The Greater and Lesser Caucasus border the northern and eastern sides of Georgia . The highest peak in the region is Mount Shkhara with a height of 5,201 m.

Georgia has a population of 4,646,003 people. Georgians form the ethnic majority while ethnic groups like the Azeris, Armenians, Russians, Abkhazians and Ossetians constitute the remaining population. Ethnic minorities include tribes like the Kabardins, Tatars and the Turks.