Germany is one of the important business centers in Europe. It consists of 16 states. Berlin is the capital of Germany. 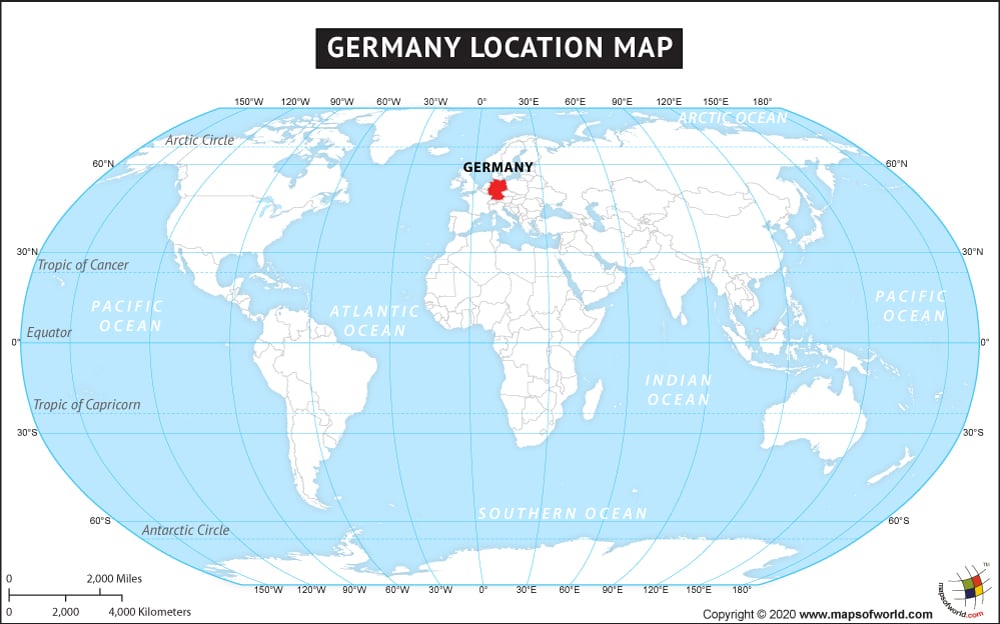 Description : Map showing the location of Germany on the World map.
0FacebookTwitterPinterestEmail

The Federal Republic of Germany (German: Deutschlandkarte) is located in central Europe. This country is bordered by Netherland in northwest, Belgium, Luxembourg Netherland and France Netherland in the west and southwest, Denmark in the north, Czech Republic and Poland in the east and Switzerland and Austria in the south and southeast. The country shares its coastline with Baltic Sea in the north and North Sea in the northwest. It has 2389 km long coastline. Germany span over an area of 357,022 sq. km. with 3790 km long land boundary. The country lies between 47° and 55°N latitudes and 5° and 16°E longitudes.

The terrain of Germany shows rise in its elevation from north lowland to upland in the center and Alps in the south. The climate of Germany varies from temperate to marine climate. Germany’s capital city Berlin Berlin situated in its northeast region is not only its largest city but is also its educational and cultural center. Berlin is home to many of the internationally recognized universities and research centers. Germany’s culture, art, architecture have flavor of its history and tradition. Economically, Germany has strong foothold in the European continent and in the world.

What is the Capital of Germany?

Berlin is the capital city of Germany, located in the eastern region of Germany. It has an approximate population of 3.5 million. Brandenburg Gate, Reichstag, Berlin Television Tower, Berlin Wall, Museum Island are few important point of interest.