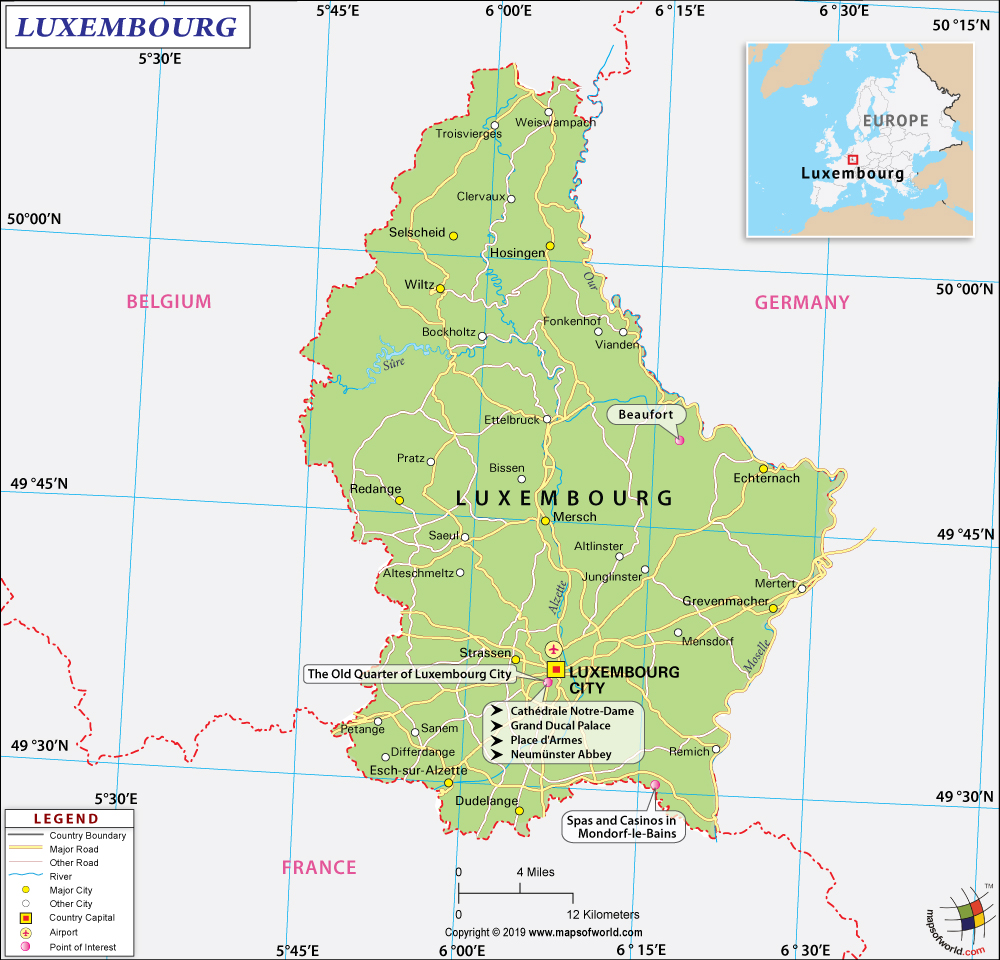 The early history of Luxembourg (German: Luxemburg Karte) includes a period of Celtic rule from about 600 BC to 100 AD, and the arrival of the Treveri people from Gaul in the 1st century BC. The Teveri were conquered by the Roman Empire in 53 BC, becoming Gallia Belgica. The Teveri adapted into the culture, except for a few revolts in the 1st century AD. The Franks invaded around the 4th century, pushing the Romans out by 406, and making the region part of the Carolingian Empire.

In medieval times, Lucilinburhuc (Luxembourg Castle) was built as the residence of the Count of Ardennes, Siegfried I, and expanded into an important fortress. The House of Luxembourg ruled in the Holy Roman Empire in the 1300s and 1400s. Luxembourg was a fief until 1354, when it became a duchy. The French, led by Louis XIV, invaded Luxembourg in 1684, ruling it until 1815 when Napoleon was defeated. Luxembourg was then fought over by Prussia and the Netherlands, and it became a Grand Duchy.

During the Belgian Revolution, which began in 1830, Luxembourg was divided further, with the western portion granted to Belgium and independence for Luxembourg granted in 1839. Luxembourg was invaded by Germany in both World War I and II. During World War II, Luxembourg was absorbed into the Third Reich until it was liberated in 1944. It has since been part of the UN, NATO, and the EU.

Luxembourg is entirely landlocked, with borders along Belgium, Germany, and France.

The small country of Luxembourg is a landlocked nation in western Europe. The country’s terrain is divided into the northern third, called Oesling, which is situated in the Ardennes range, with forests and hills, and the southern two-thirds, which is known as Gutland. Gutland includes a flat plateau region, the Moselle Valley, Redlands, and what is known as Little Switzerland, which is characterized by forests. The country is primarily lowlands, with its highest point just 560 meters above sea level, with Kneiff in Troisvierges, and the lowest point at Moselle in Wasserbillig at 133 meters above sea level.

As a landlocked country, Luxembourg has no water boundaries. However, several major rivers traverse Luxembourg, including the Sauer, the country’s longest river; the Moselle; the Our, along the border with Germany; as well as the Alzette, Attert, Clerve and Wiltz rivers. Luxembourg’s largest body of water is the Upper-Sure Lake.

Luxembourg’s capital, Luxembourg City sits atop a cliff along the Alzette and Petrusse river valleys. The city is home to UNESCO World Heritage sites including its Gothic Revival Cathedral of Notre Dame, and the historic Grand Ducal Palace. Other historical and architectural sites include the Place d’Armes and Neumunster Abbey and the historic center.

The oldest city in the country, however is Echternach, home to a historic basilica, and the nearby scenic sites of Little Switzerland. Vianden, with its own medieval castle, the Beaufort, is set in the forests of the Our Valley, alongside the Victor Hugo house. There are also several small resort towns in Luxembourg, including spas and casinos in Mondorf-le-Bains.

Just outside of Luxembourg City is the country’s international airport, Luxembourg-Findel International, which offers service to many major European cities. Other nearby airports are in Germany and Brussels. Train is a great method of getting to Luxembourg, with quick service from Paris, Metz, Brussels, and Trier. Driving by car or taking a bus are other ways to get into and around the country, while enjoying the hills and scenery, but trains tend to be quicker. Buses and taxis are common ways of getting around the cities of Luxembourg, while bikes can be used on the designated bike paths.