Stuttgart is one of the four administrative districts of Baden-Wurttemberg, Germany. It is one of the vibrant economic, cultural, sporting and social hubs of the region. 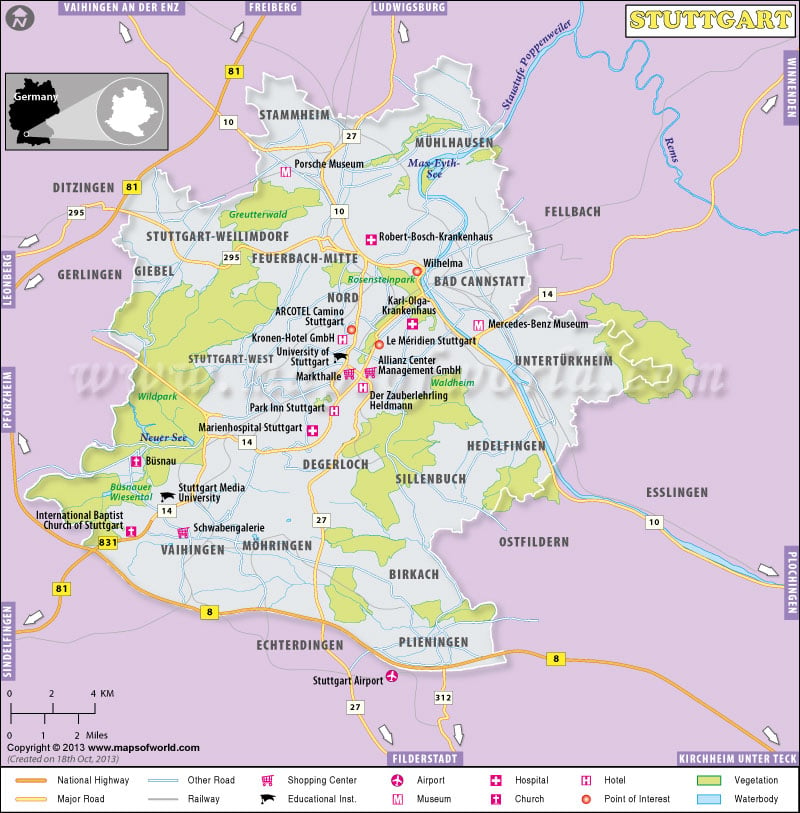 Description : Map shows roads, highways and greenery around the city of Stuttgart in Germany.
0FacebookTwitterPinterestEmail

Stuttgart is the capital of the Baden-Wurtlemberg in the southwest region of Germany. It is mostly known for its large number of vineyards that are in close proximity to the city streets. The city is also known for its automotive industry,

where the headquarters of Porsche and Mercedez-Benz are found.

Stuttgart is Germany’s 6th largest city and boasts of being one of the most liveable cities in the country and the world, according to the Mercer Liveability rankings. The city is also nicknamed Schwabenmetropole or Swabian Metropolis due to its location in the Swabian region and the use of the Swabian dialect by the native inhabitants.

Stuttgart is situated in the southwestern region of Germany. It is characterized by picturesque hills that surround the city, and lying in a lush valley of vineyards and thick woodland. Located in one of the largest wine-growing regions, steep hillsides are found close to the city center, with hundreds of stairways, formerly used to give access to vineyards but are now used to connect the streets.

How to Reach (Transport)

By Plane – The city is served by the Stuttgart Airport, which is located 13 km south of the city. It is the only international airport in Germany with only one runway. It offers routes to major German cities, as well as to several European cities.

By Train – Connections to several German cities are available from Stuttgart through its rail system. The U-Bahn or underground train is the best public mode of transportation within the city center, while the S-Bahn is the best way to get to and from the suburbs.

By Buses – When the S-Bahn and U-Bahn halt services in the evening, the best and cheapest way to get around are the night buses.

By Taxi – Taxis are very expensive in Stuttgart and it’s not ideal for the budget traveler. It’s only recommended when you’re going out at night in a group – 4 minutes inside a taxi in the city can cost 10 EUR.

The best time to visit Stuttgart is during the months of May to October. The city enjoys the most pleasant weather during these months, where the outdoors are bright and clear but never getting too hot. Autumn and spring also provide wonderful weather in Stuttgart, wherein the winter months are the worst times to visit for their extremely cold temperatures.

Culture (Fairs and Festivals) and Traditions

Cannstatter Wasen – Held annually in late September to early October, this beer festival is the 2nd largest fun fair in the world. One of the highlights of the event is the world’s largest ferris wheel – which brings tens of thousands of families to the event. Beer tents, outdoor live music, food stalls, and performances are found in this week-long festival.

Stuttgart Summer Festival – This open-air festival is reserved for Stuttgart’s food and music aficionados. Five outdoor stages hold live music performances in the genres of jazz, soul, swing, and opera, while the Palace Square is filled with tents and stalls of the city’s best culinary offerings. Top restaurants and top chefs from around the city and beyond offer their latest culinary creations for the discerning crowd.

Stuttgart Wine Festival – While the country is known for being the biggest lovers of beer, Stuttgart is known as the biggest lovers of wine in the country. A quiet event that stands out for its non-existent live music, over 100 stalls are set up in the heart of the city, all decorated with vines and offering the best culinary treats of typical traditional food, along with the best regional wines found in the region.

Flea Market at Karlsplatz – Held every Saturday from 8am to 4pm in the Karlsplatz square, it is the best place in the city to find absolutely anything and everything on sale. Antique furniture and jewelry are sold in this market, as well as local produce, traditional food, drinks, and every item imaginable. It’s the best place and time to meet and chat with locals and tourists alike.

Mercedes-Benz Museum – Visited by over 800,000 people a year, this permanent museum of the iconic car company showcases over 160 of its cars from the very beginning of its history until the present.

Staatsgalerie Stuttgart – One of the finest European art museums, it opened in 1843 and since the building of the Neue Staatsgalerie beside the old building, has established itself as one of the best in the continent. Among its most notable pieces of artwork are the Corpse of Christ by Annibale Carracci and the works of Pablo Picasso.

There are about 200 hotels in Stuttgart, as well as other options for accommodation such as hostels, apartments, and guesthouses. Room rates usually differ depending on the season where prices skyrocket during holidays and during international fairs.