Hannover, the capital of the Federal State of Lower Saxony is one of Germany's ten largest cities. 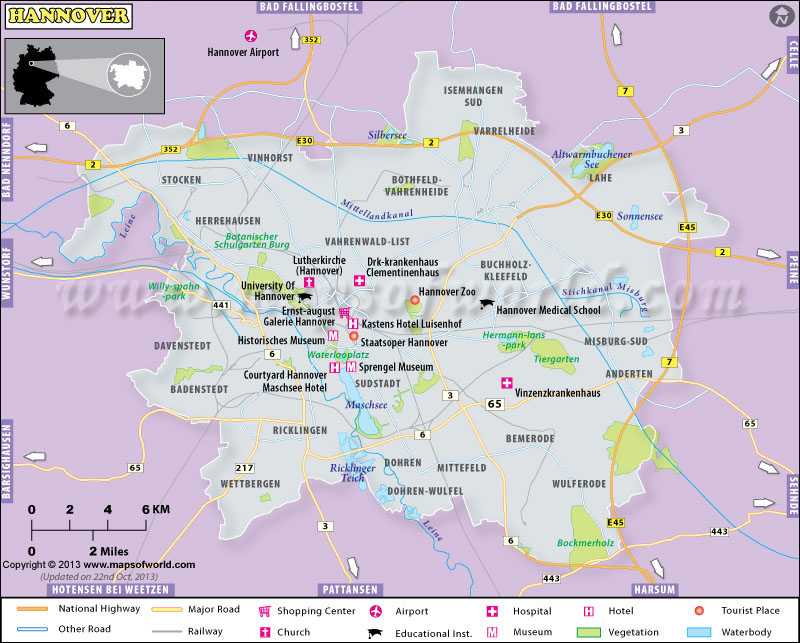 Hannover is a city in Germany found in the northwest region. It is also known as EXPO City or Exhibition City, due to the number of international fairs it hosts every year.

The Hannover Playground it the biggest of its kind in the world, where most of the exhibits take place.

Hannover is the 13th largest city in the country, and is the current capital of the federal state of Lower Saxony. It is a major transportation hub, as well as an important center of trade and industry. Though tourism is one of its important industries, there are very few historical landmarks since it was one of the hardest hit cities during the Second World War.

Hannover is located in the northwest part of Germany, where the River Liene enters the city in the south. The city also lies on the Mittlelland Canal. The landscape is generally flat with very few hills. The city is divided into 17 towns and 4 municipalities.

How to Reach (Transport)

By Plane – The Hanover/Langenhagen International Airport serves the city, with flights available to and from major European cities. The airport is one of the few airports in the world to offer check-in options for passengers the day before the scheduled date of departure for some airlines.

By Train – The city is served by the German Rail Service with frequent daily services to other German cities, as well as direct routes to other European cities like Switzerland, the Netherlands, France, and Austria. The ICE or Inter City Express is a high speed train system that takes passengers to and from cities all over the country. The S-Bahn or overground rail is the fast tram system that brings passengers from the city to the suburbs and back.

By Bus – The bus is the most comfortable way to travel for long distances from the city.

Taxi cabs in Hannover is quite expensive and only ideal if you go out at night or if you have heavy luggage.

By Bicycle – Bike paths are provided in almost every street in Hannover, making the bicycle a popular method of getting around.

The most ideal season to visit Hannover is in the summer, when weather is at its warmest in the city. Weather is generally pleasant but the summer season is the most preferred as it also coincides with major festivals and fairs. The months of May to October are the best months to visit the city but July usually gets unbearably hot so tourists must schedule their vacation before or after this month.

Culture (Fairs and Festivals) and Tradition

CeBIT – Held every March over several days, it is the largest computer-related exhibition in the world. Held at the Hannover Playground, it attracts an estimated 850,000 visitors each year.

Hannover Fair – The world’s biggest festival for all things industrial technology, it began in 1947 and has been hosted by the city ever since. There are over 6000 exhibitors in this fair, visited by over 250,000 visitors each year.

Oktoberfest Hannover – The beer festival in Hannover is the 2nd biggest in the world. About 1 million people join the festivities that consist of 3 beer tents, live concerts, family days, ladies nights, a lantern parade, and over 100 rides and inns.

Schutzenfest Hannover – The largest marksmen festival in the world, it started in 1529 and has evolved into one of the country’s biggest festivals. Over 5000 marksmen, 250 rides and inns, and 5 large beer tents comprise this festival, with the largest parade of 10,000 participants as the festival’s highlight.

Royal Gardens of Herrenhausen – This 17th century intended copy of the Versailles Garden in France is a world famous baroque garden. The most ideal time to visit is at the beginning of spring and early summer, when flowers are in bloom. It is also home of Europe’s highest garden fountain.

Hannover Zoo – The best zoo in Germany and one of the most spectacular in Europe, the zoo has over 2000 species of animals, grouped in 6 different theme areas. There are also several other attractions in the zoo, which include the snow arena and the tropical house. Annual visitor numbers exceed 1 million people each year.

Accommodation
There are plenty of options for accommodation in Hannover, however, hotels are usually fully booked during the big exhibitions so it’s always ideal to plan and book in advance.