What are the popular places to visit in Paris? - Answers 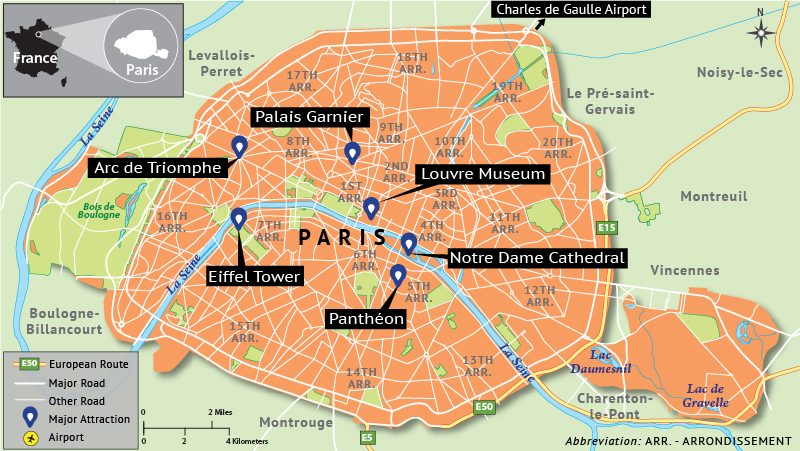 Paris, the capital of France, is grand, yet intimate. One of the most romantic cities in the world is also a treasure island for history buffs and architecture enthusiasts. Its love affair with Hollywood is legendary, its Art Nouveau cafes are stunning, and the culinary delights leave an indelible impression. Paris is a tinsel town but with a touch of elegance that oozes out from its attractions and the people around. There’s hardly any city that can impress you as much as Paris.

Places to Visit in Paris

Eiffel Tower – One of the most famous and iconic structures in the world, the Eiffel Tower is easily the most popular tourist attraction in Paris. This 320-m-tall enduring symbol offers the most spectacular view of the city.

Arc de Triomphe – This is the second most famous monument in the city and the toughest competitor of Eiffel Tower as the symbol of Paris. This magnificent monument, which came into existence in 1836, is known for its arcades adorned with allegorical figures from Roman mythology.

Louvre Museum – No newcomer in Paris can resist a visit to this museum, which is amongst the most diverse and the largest in the world. It houses some 35,000 pieces of artwork from Greek, Egyptian, and Mesopotamian antiquities. Works from legendary artists such as Rembrandt, Michelangelo, and Leonardo da Vinci are showcased here, including the famous painting of Mona Lisa.

Panthéon – The Pantheon dominates the Parisian skyline. The neoclassical dome of this 18th-century mausoleum is one of the most recognizable structures in the city. The church-turned-mausoleum has the remains of greatest thinkers such as Hugo, Voltaire, Braille, and Rousseau.

Notre Dame Cathedral – Frequented annually by 14 million visitors, the Cathedral is one of the most elegant buildings in Paris. You don’t have to pay a penny to visit this French Gothic architectural masterpiece.

Palais Garnier – This opera house is grand in every sense of the term. The beautiful murals, massive chandeliers, and the Grand Staircase leave you spellbound.

Things to Do in Paris

The museums in the city give you the chance to explore and be culturally enlightened. From one-man shows to theaters and operas to ballets, events throughout the year keep visitors on their toes. The Theatre Mogador, Zenith Paris, and Palais des Congre’s de Paris host the best shows in town.

Paris is a major sports hub and a much sought-after destination for sports fanatics. A score of visitors is attracted to Paris to witness the battles at French Open tournament, Tour de France, the Paris Marathon, and the Six Nation Championship.

For those who want to spend a Parisian holiday in style, come to the Faubourg Saint-Honoré district. From designer boutiques to concept stores, this trendy shopping district has everything a shopper can lust for. Window shopping on Rue Saint-Honore is also an indulgence.

Arguably the world’s most beautiful and the most romantic city, Paris is home to luxury, mid-range, and budget hotels. Hotel Pont Royal Paris, Castille Paris, and Hôtel de Vigny are the preferred resorts for those looking for luxury accommodations. Hotel du Mont Blanc, Hôtel de Roubaix, Hôtel Des Mines, and Hotel d’Amiens are some of the budget hotels in and around the city.

Paris has a range of glittering eateries. Some of the famous bistros and brasseries in the city include Le Pantruche, Frenchie restaurant, Firmin Le Barbier, Bouillon Racine, and Abri. For international delicacies, you can opt for Restaurant David Toutain. Verjus wins hearts with its American fare. While Candelaria specializes in Mexican dishes, Sola offers fusion cuisines. There is no dearth of restaurants serving authentic French cuisine. Try Le Casse Noix, Chez Michel, Blue Valentine, La Pointe du Groin, Le Coupe Chou, and Septime for the best of local delicacies.

The Charles de Gaulle Airport is the international gateway to the city. It is just over 21 miles from the heart of Paris that calls for a 40-minute drive. The capital city is well connected through an ultra-modern rail network and an extensive road network.

Generally, the city remains warm throughout the year. However, it gets relatively cooler and pleasant from October to March. So, this is the best time to visit.