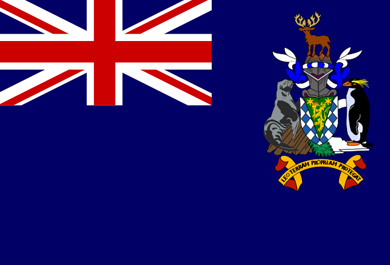 The flag of South Georgia and the South Sandwich Islands is a blue ensign, which features the Union Jack in the upper left corner, charged with the official emblem.

The official insignia features a badge with a golden raging lion with a torch; the badge is held up by a macaroni penguin to the right and a fur seal to the left; there is a reindeer on top of the crown; under the badge on a roll is the slogan LEO TERRAM PROPRIAM PROTEGAT, which means “Let the Lion Protect its Own Land”. The field of the badge, white and blue estoiles, is seen in the symbol of James Cook, who found the archipelago. The external creatures holding the shield symbolize the indigenous creatures found in the archipelago. The lion holding the torch stands for the finding and the United Kingdom.

The ensign is hoisted on top of the principal administrative establishments on the island of South Georgia, and the research areas of the British Antarctic Survey. The first ensign used a tinier edition of the official insignia demonstrated in a white circle. However, this was modified to the contemporary ensign between the period 1999 and 2002.