The ensign of St. Helena is blue in color and features the Union Jack on the upper left side near the flag pole. The shield of Saint Helena is placed on the outer side of the ensign. 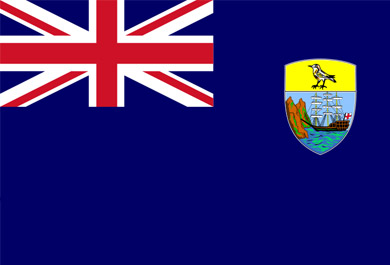 The ensign of St. Helena is blue in color and features the Union Jack on the upper left side near the flag pole. The shield of Saint Helena is placed on the outer side of the ensign.

Saint Helena, Ascension, and Tristan da Cunha is an overseas dependency of Great Britain, lying in the southern part of the Atlantic Ocean. Every one of the three divisions of the dependency hoists a separate ensign.

Since St. Helena is a dependency of Britain, it flies a variant of the Union Jack. The flag of Saint Helena is flown on every major occasion in the territory. Vessels licensed in the territory hoist the red flag and it has no defaced edition. The flag of St. Helena is not flown in the colonies of Saint Helena. At present, Ascension Island flies the Union, Jack. However, it is in the middle of introducing its own ensign. Tristan da Cunha approved its own ensign in the month of October 2002.

The Saint Helena Flag was officially approved on October 4, 1984. Before the approval of the present insignia and ensign in 1984, the shield and ensign featured the vessel and shoreline view obtained from the badge of the settlement.

During the period 1939 to 1984, the ensign used had resemblances with the current flag but the plover bird was not there on top of the seal. The seal for the territory originated from the Government Seal of the settlement in 1874.