The Montserrat flag came into being on 25th January 1999 which is also the date for the 'Coat of Arms' adoption. 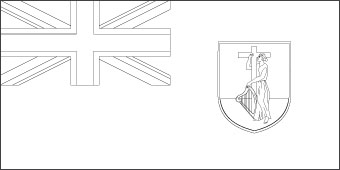 Download Picture of Blank Montserrat Flag For Kids to Color

Montserrat is a territory of the United Kingdom. The overall setting of the flag is blue in color which symbolizes awareness, trustworthiness, determination, and righteousness. The British Union Jack is present on the upper left section of the flag, known as Canton.

The Montserratian emblem is located on the right half of the Montserrat Flag, which represents Erin, the sign of independence for Ireland.

The symbol on the Montserrat Flag shows a woman standing very close to a yellow harp embracing a black cross. To show respect to the earlier European settlers the Montserrat flag bears the shamrock as its insignia.