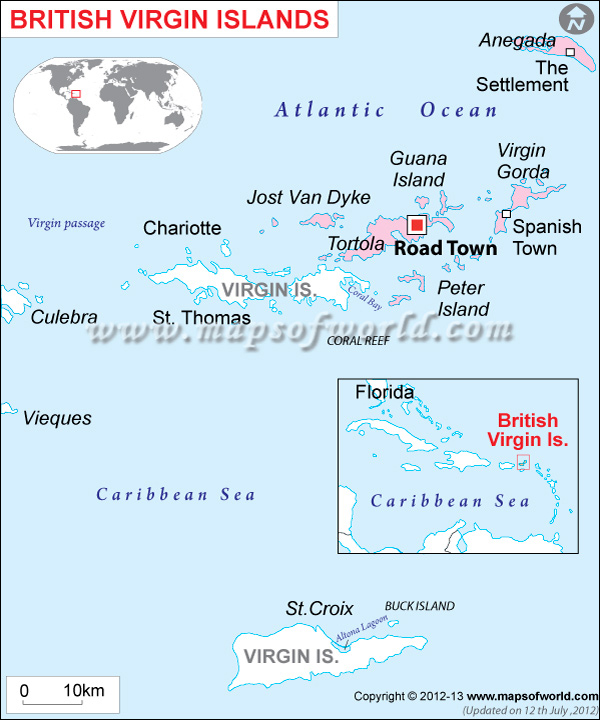 Jaunt to the British overseas territory of British Virgin Islands that is constituted with several Caribbean islands and cays especially with islands like Tortola, Virgin Gorda, Anegada and Jost Van Dyke.

The place was earlier inhabited by Arawak till the English came to dwell in this place during the year of 1672. Discover Nature’s little secret with rich cultural legacy where each island has a different story to tell. Unfold the legendary secrets from the shipwreck tales to the sea plunders, from the pirate’s treasury hunt to the customary tax payment with huge salt bags, is something which this place love to share with.

British Virgin Islands is nestled in the midst of Caribbean Sea and the North Atlantic Ocean, lying to the east of Puerto Rico, being a part of the West Indies in the Leeward Island chain.

Amidst the grandeur of the undisturbed natural beauty this island is surrounded with dramatic green hills and tropical dense forests , white sand beaches filled with plethora of marine life, volcanic islands with rugged terrain that leaves behind a magical aura as you get intoxicated by its sensuous splendor.

Experience an enjoyable temperature, with a sub tropical weather condition, which is affected by the trade winds. The summer witnesses around 29°C and the winter observes around 25°C. It is between September to December the areas are affected with heavy downpouring. The place is even prone to occasional hurricanes that passes through from the month of June to October.

Unfold your imagination as you traverse through the diverse flora and fauna richly interspersed with myriad of euphoria in this island.The native flora delights you with its vibrant colors and its delicate aroma. The yellow cedar (Tecoma Stans) is the national flower of this region. To name some of the native flowers are Frangipani, Allamanda, Double Hibiscus, Ixora, Heliconia and many others that surely catch your glance.

As you stroll across the islands of St. Thomas, St. Croix and St. John, come across the native faunas of the region. They include animals like iguana, hermit crab, mongoose, deers and bats.Among the birds, the brown pelican is found abundantly at the Caribbean in Virgin Islands adjacent to places like Mary’s Point on St. John, Congo and Whistling cays at St. John and Buck Island off of St. Croix. The seagull popularly known as laughing gull is also widely seen in this region. The blue heron can be observed at the mangrove islands and in the lagoons or watch for snow-white egret often seen in cow pastures. Visit the endangered species of Zenaida dove, which is often noticed by frequent travelers.

Visit the national parks of the region which includes the Queen Elizabeth II Park which is a host to the exotic ranges of shrubs and flowers or travel to Sage Mountain National Park that is famous for mahoganies, hanging vines, enormous elephant ears, white cedars, and kapok trees. Fallen Jerusalem National Park is known as the habitat to different bird species like brown boobies, laughing gulls, noddies and brown pelicans.

The population of British Virgin Islands is basically peace-loving people who reside in harmony. Get a warm welcome from this multi cultural people who descended from Afro-Caribbean region. The major ethnic groups belong to the British and European origin. The religion that thrives here are Protestant Christian, Methodist, Anglican, and Catholic.

Arts: Take a tour to the picturesque village of Crafts Alive and glance through the reminiscent of the wooden gable end houses that were an important feature of this place during the 20th century. Watch out the African dolls dressed in traditional attire, and several pottery made products. Glance through the Indonesian and African sculptures, African Zulu masks, bird covers and rattan baskets, which are authentically designed here.

Culture: Participate in The Easter Festival and the Emancipation Festival, which is celebrated during the spring and the summer months. The Christmas Festival that is held in the Main Street of the Road Town bring along the festive mood where streets are all lit with attractive lights. Take part in the crafts fairs, which displays works on rattan, terracotta, oil paintings and watercolors. The traditional culture of the region rests on the African and European refinements.

Music: The aboriginal music of this place is the famous scratch bands, which were popularly known as the fungi bands. They contributed a different class of music known as quelbe played with gourds and washboards instruments. Cariso is the popular folk song of the region along with the sounds of St. Thomas’ bamboula tunes. Quadrille being the authentic native dance where the Heritage dancers are the widely honored dance troupe of the town.

The flag of British Virgin Islands was accepted in November 15, 1960. The Union Flag in the canton is set on the background of defaced blue ensign with the symbol of coat of arms adorning it. A lady dressed in white carrying a golden lamp is set on a shield behind a green field. This is an illustration of Saint Ursula, a Christian saint who took a sacred journey across Europe with 11,000 handmaidens. The present name of the island was given by Chistopher Columbus who reminded the story of Saint Ursula as he visited this place and assigned it with the name British Virgin Islands.

The economic growth of British Virgin Islands mainly survives on tourism, thereby attracting 350,000 tourists round the year accounting for 45% of the National Income. From visiting the The Baths on Virgin Gorda to watching coral reefs at the Anegada, from taking a charter ride on yachts to visiting the bars of Jost Van Dyke, this place is filled with diverse traveling experiences. This island even earns portion of its income from the offshore companies. A minor segment of the country’s GDP is produced by the agricultural production like fruit , vegetables, sugar cane, livestock and poultry and industries like rum distillation, construction and boatbuilding. The US dollar is the official currency of this place.