Romania's latitude and longitude is 46° 00' N and 25° 00' E . Below is the map of Romania showing major towns, roads, airports with latitudes and longitudes plotted on it. 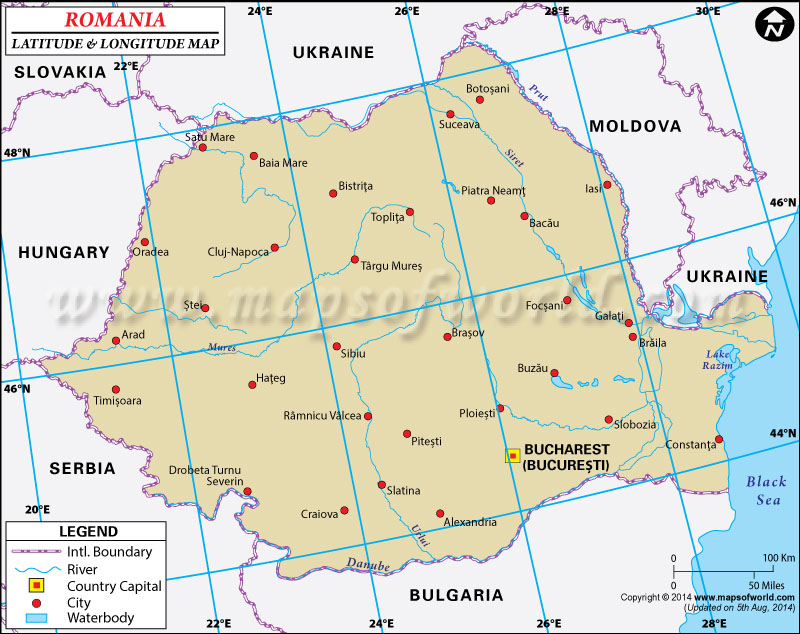 
The latitude and longitude of Romania is 46º 00' N and 25º 00' E respectively. It is located in southeastern Europe and lies between Bulgaria and Ukraine.

The total area is slightly smaller than that of Oregon. Bucharest, the capital is located on 44º 26' N and 26º 06' E latitude and longitude respectively. Romania comprises of 41 counties and is seven hours ahead of Washington DC during Standard Time.

The total area of Romania is 237,500 square kilometers with a coastline extending up to 225 kilometers. On the eastern side, central Transylvanian Basin is separated from the Plain of Moldavia by the Carpathian Mountains and separated from the Walachian Plain on the southern side by the Transylvanian Alps. The climate of Romania is of temperate kind. The winters are cold and cloudy with dense fog and snow occurring frequently and while summers are sunny with frequent showers and thunderstorms. The Romanian region is very prone to earthquakes, more so on the southern and southwestern side.