Kyrgyzstan's latitude and longitude is 41° 00' N and 75° 00' E . Below is the map of Kyrgyzstan showing major towns, roads, airports with latitudes and longitudes plotted on it. 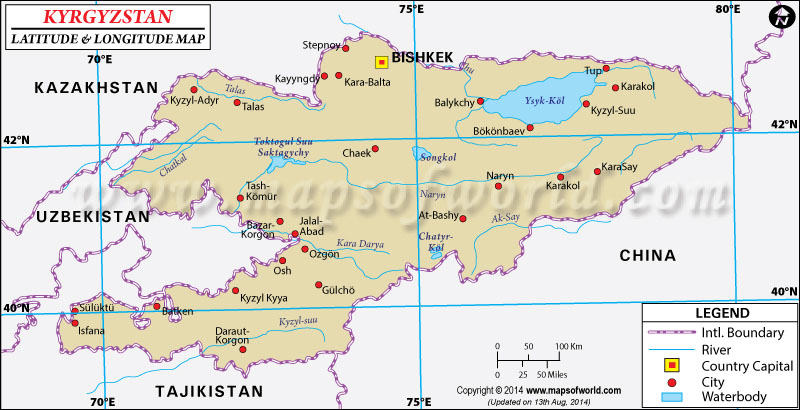 Kyrgyzstan was granted independence from Russia on December 21, 1991, after the breakdown of the Soviet Union. Presently the latitude and longitude of Kyrgyzstan accommodates several districts - Batken, Chui, Jalal-Abad, Naryn, Osh, Talas and Issyk-Kul. The states are divided into districts called Raion which are governed by Akims.

Kyrgyzstan is known as the Switzerland of Central Asia; about 80% of the land mass is composed of the Tien Shan Mountain Range and its many valleys and river basins. The highest peak is the Jengish Chokusu Mountain also known as Pik Pobedy, standing at a height of 7,439 m. Kyrgyzstan's geographic location is dominated by the dry continental type of climate which reaches subzero temperatures in winter. The climate varies from region to region and differs according to the latitudinal and longitudinal location of the Tien Shan and the Fergana Valley. The Mountains are almost always under snow while the valley regions are warm in summer.