The Minnesota flag has a medium blue background and a centrally placed state seal. The circular seal on the Minnesota Flag is placed on a white field, encircled with a golden yellow border. 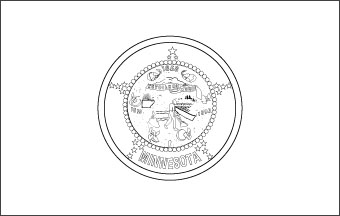 Download Picture of Blank Minnesota Flag For Kids to Color

The flag is also decorated with a gold fringes and a golden border. There is another circle within the emblem, that depicts pictures from Minnesota’s Great Seal of the State. This is encircled by 19 stars, which are arranged in 5 groups.

The group at the top has 3 stars, whereas the other 4 groups have 4 stars each. At the bottom of this picture, the name of the state “Minnesota” is etched in red capital letters. The state seal is also surrounded by a wreath of lady slipper, the state flower.

The state seal on the Minnesota Flag portrays a farmer plowing his field, which is a symbol for the state’s agriculture. The Native American on a horse represents the state’s heritage. The water stands for St. Anthony’s Falls and also for the Mississippi river, an important symbol for commerce and transportation. The tree base signifies the lucrative timber industry, whereas the red pine trees are symbols for the state tree. The wreath displays 3 significant dates. 1858 is the year when Minnesota gained statehood. In 1893, the Minnesota Flag was adopted. In 1819 Fort Snelling was set up. The 19 stars indicate that Minnesota was the 19th state to get admitted into the Union.

The Minnesota Flag is a bright blue flag that depicts the ideals of the state in the best manner.