The state of Minnesota is home to 87 counties. Besides, it is also noted for having various historical counties. On 27 October 1849, a total of nine counties were introduced… 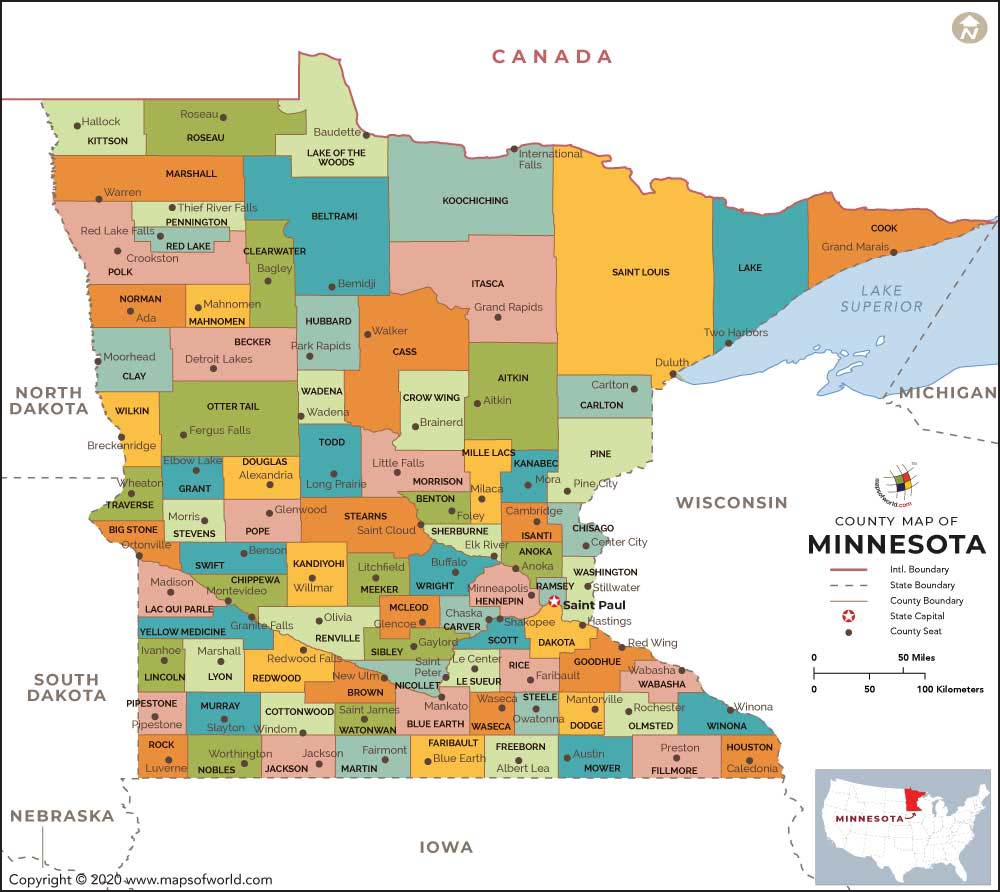 The state of Minnesota is home to 87 counties. Besides, it is also noted for having various historical counties. On 27 October 1849, a total of nine counties were introduced to the state, namely Dahkotah, Benton, Ramsey, Itasca, Pembina, Mahkahta, Washington, Wabasha, and Wahnata. Among these, Itasca, Ramsey, Benton, Dakota, Wabasha, and Washington retain their initial names. However, the county of Pembina lost its existence with the introduction of the Kittson County on 9 March 1878.

Some of the prominent counties of Minnesota are as follows:

Benton County: One of the initial nine counties introduced in 1849 by the territorial legislature, the Benton County recorded an approximate population of 38,351 as the 2010 census records. When formed, the county was about forty miles in width and hundred miles in length. However, between 1856 and 1860 it was cut short to its current size.

Aitkin County: Located in the North Central region of Minnesota, Aitkin County was established in 1857 and Aitkin city is its county seat. The county is home to more than 400 lakes that lure boaters, anglers as well as others who are in love with lakes. The population of lake lovers triples during the summer months. Moreover, the county also attracts hikers, walkers, ATV riders, and bikers.

On the other hand, those willing to tour this county during the winters can look for some exciting snowmobiling and fishing activities. In short, it makes a good choice for vacationers, both in the winter and summer months.

Kittson County: Located on the northwestern side of Minnesota, the county was established in 1878. The county seat of Kittson is Hallock. The county is further subdivided into four watershed districts, three school districts, nine cities, four unorganized townships, and 26 organized townships. The adjacent counties, include Roseau County, Walsh County, Marshall County, and Pembina County.

The western region of the Kittson County, which is a part of the Red River Valley is noted for producing wheat, soybeans, canola, sunflowers, barley, and sugarbeets in large amounts while the eastern end carves a niche for its wildlife population. Among the major attractions of this county one cannot certainly miss the Lake Bronson State Park, which was created during the Work Projects Administration (WPA) days, the most ambitious and biggest American New Deal Agency.

Lake of the Woods County: This is the youngest county of the state and was introduced on 28 November, 1922. A voting took place among the area residents at this point of time and as an outcome the northern townships were detached from Beltrami County. With Baudette as its county seat, the county initiated its operations officially on 1 January 1923. As per the 2010 census records, Lake of the Woods County held an approximate population of 4,045. The county makes a good choice for those interested in forest explorations, fishing, and hunting.