Honduras Flag has three horizontal bands of equal size and two colors, blue and white, and was officially effective on 7 March 1866. 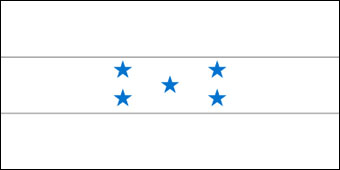 Download Picture of Blank Honduras Flag For Kids to Color

The flag of Honduras is comprised of three equal-sized horizontal bands,

with blue on the top and bottom and white in between. On the middle band are

five stars, forming an H in the center, two stacked together on the right and left, and one in the very center. The blue stripes symbolize the waters bordering Honduras: the Pacific Ocean and the Caribbean Sea. The white symbolizes peace and prosperity, while the five stars represent the nations of the former Federal Republic of Central America, which included El Salvador, Costa Rica, Nicaragua, Honduras, and Guatemala.

History of the Flag of Honduras

The flag of Honduras is based on the flag of the Federal Republic of Central America, which uses a pale shade of blue for the outer bands, and the federation’s seal in the center. After the federation dissolved around 1838, Honduras kept the union’s flag, adapting it as its own, adding the five stars in hopes the nations could be united again, and reflect their shared history.