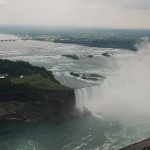 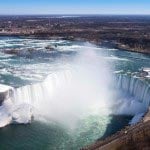 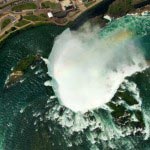 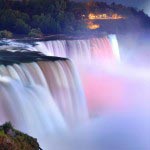 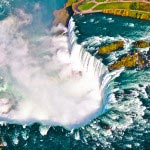 Niagara Falls is a group of massive waterfalls located on the Niagara River on the border between the United States and Canada. North America’s most powerful waterfalls – the Niagara is actually a collection of three falls: The Horseshoe Falls, The American Falls and the Bridal Veil Falls. While the American Falls is sandwiched between the Prospect Point and the Luna Island, the Bridal Veil Falls is located between the Luna Island and the Goat Island. The Canadian/Horse Shoe Falls gushes between the Goat Island and the Table Rock.

The Niagara itself is a river which is about 12,000 years old. There were ice-sheets of 2-3 kilometers thick in the southern part of Ontario 18,000 years ago. Along the ages and after certain topographical changes the ice-sheets melted and a lot of water accumulated in the Great Lakes Basin. Water from Lake Erie, the Niagara River and Lake Ontario all contribute to the falls. The Niagara Falls is the second largest falls in the world.

Each day per minute the Niagara gushes water exceeding 6 million cubic feet. On an average the amount is 4 million cubic feet. Niagara is one of the chief sources of hydroelectric energy for the whole of New York and Ontario. Thus the falls help in the development of commerce and industry and the state’s revenue collection is also strengthened by the flourishing tourism industry.

Many people tried various stunts at the falls. Some survived while others died in accidents during their performances. Among several daredevils of the Niagara Falls, the prominent ones are Nik Wallenda’s – a tightrope walker who performed stunts in 2012, Mrs. Annie Taylor – the first person to survive the falls, William Kendall – a swimmer who survived the falls, Maria Spelternia – only woman to cross the falls on a tightrope.

The American Falls and Bridal Veil Falls are 1,060 feet wide and have a clear drop of only 70 feet.

Where is Niagara Falls?

Niagara Falls is located on the Niagara River on the International border between Ontario province, Canada and New York state.