Explore the map of Toronto, Canada. It is the most populous city in Canada and the capital of the Canadian province of Ontario. 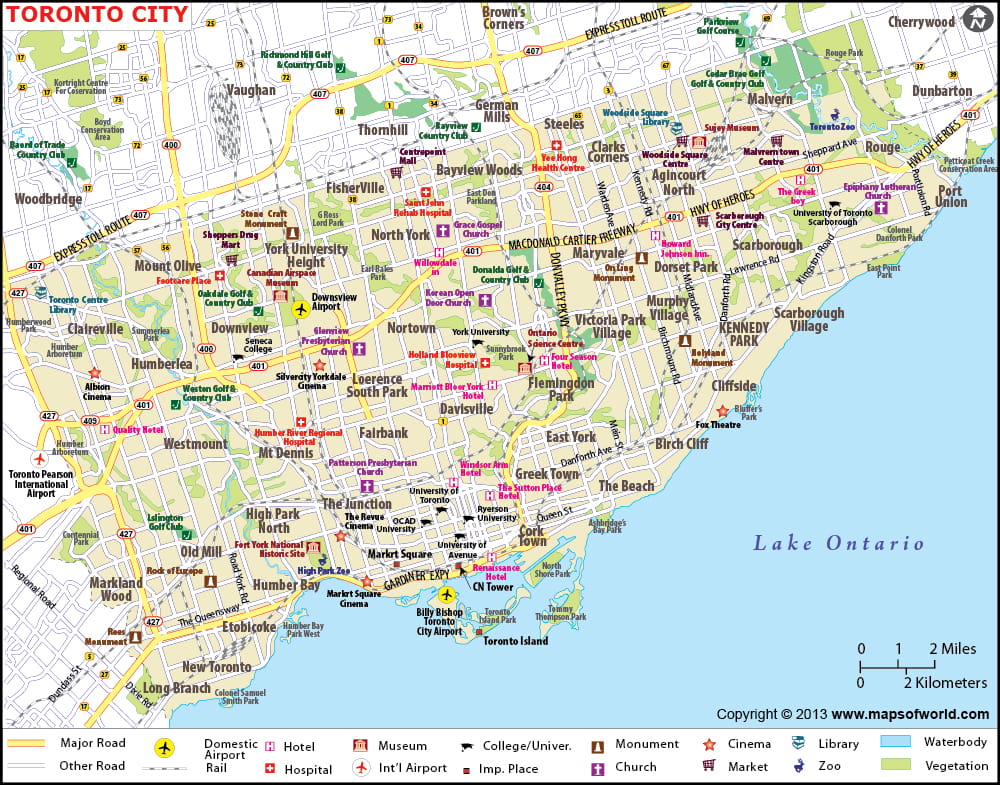 Toronto, the most diverse city is the world’s most livable city. It is the provincial capital of Ontario, a Canadian state. The name ‘Toronto’ means a place where trees stand in the water. As a global city that exerts significant regional and international influence, Toronto is one of the most multicultural and ethnically diverse cities in the world. It is also one of the country’s most important cultural, artistic, and health science centers.

Where is it Located: Located on the northwestern shore of Lake Ontario, Toronto covers approximately a total area of 630 sq. km. It is bound by the Rouge river to the east, Etobicoke Creek and Highway 427 to the west, Steeles Avenue to the north, and Lake Ontario to the south.

How to Commute: Toronto Pearson International airport the busiest airport in Canada, serves as a gateway to the country from other parts of the world. Toronto Transit Commission or the TTC is North America’s third largest public transit system after MTA New York City Transit and Mexico City Metro. TTC provides public transport to Toronto city with an extensive network of buses and streetcars. The city of Toronto is also famous for its extensive network of bicycle lanes.

Where to Stay: Most of the Toronto hotels are situated in downtown Toronto, in close proximity to the major tourist destinations of Toronto. Delta Chelsea Hotel, Cambridge Suites, Cosmopolitan Hotel, Courtyard by Marriott, Four Seasons, Hilton Hotel, Hotel Intercontinental, Marriott Bloor Yorkville Hotel, Marriott Eaton Center Hotel, Marriott Skydome Hotel, and The Grand Hotel are some of the best downtown Toronto hotels. These hotels are known for their comfortable rooms and extraordinary service.

What to See: Royal Ontario Museum – One of the better and largest museums in North America, Art Gallery of Ontario or the AGO – the largest art gallery in North America, CN Tower – the tallest free-standing structure of nearly 550 meters in North America gives an astounding view from the top, and Casa Loma – a majestic castle of European elegance and splendor (a mansion of over 90 rooms) are some of the sites most frequently visited by tourists.