How many Oceans touch Canada? - Answers 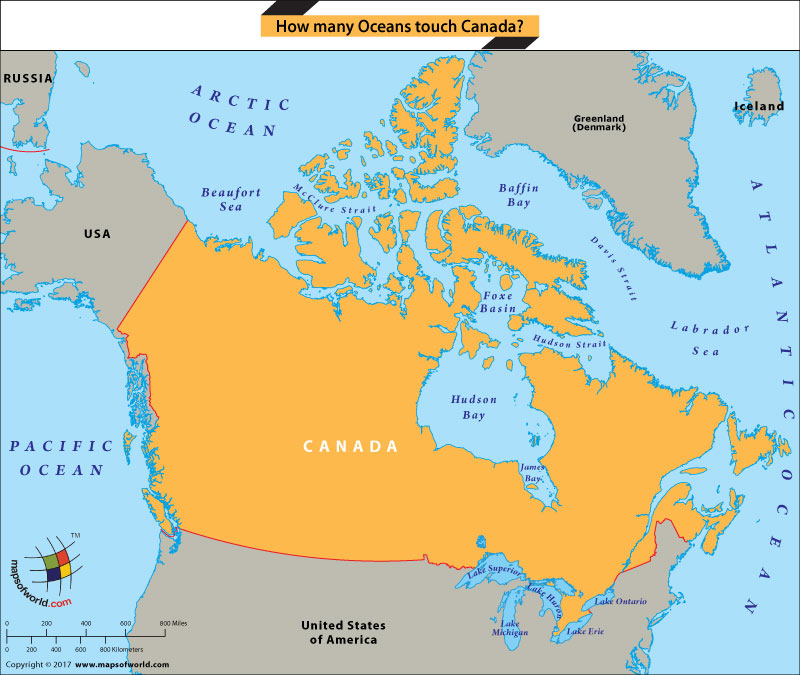 Canada is surrounded by three Oceans namely – the Atlantic Ocean on the east, the Pacific Ocean on the west and the Arctic Ocean to the north. The Alaskan Peninsula sticks out from the northwest corner of Canada which separates the Arctic and Pacific Oceans. Any climate change impacts on these oceans affect the country’s people and economy in many ways.

The country boasts of a 151,485-mile-long coastline, which is the longest in the world. Some other water bodies which border the coast of the country are; Hudson Bay and the Labrador Sea on the east and the Beaufort Sea in the west. Thus, making it a country rich in natural resources such as Nickel, Iron, Copper, Gold and Lead.

Canada gained sovereignty over Arctic from the United Kingdom through the Charter granted by King Charles II to the Hudson Bay Company in 1670. After acquiring the land security, the attention was diverted to the north-western passage which was considered as a strait for international navigation through Canadian territorial waters by United States and European Union. But Canada asserted the passage to be internal waters over which it has full jurisdiction and control. In 1969 a transit through the passage of the American supertanker ‘Manhattan’ crystallized Canadian concerns and prompted legislative action, including the Arctic Waters Pollution Prevention Act. Then once again in 1985 a similar transit through the passage by the American icebreaker ‘Polar Sea’ resulted in legal action by Canada to draw straight baselines around claimed land and ocean. Finally, in 1988, Canada and the United States concluded an Arctic Co-operation Agreement through which future transits through the passage by icebreakers would be undertaken with the consent of Canada.

In 2007 – 2008 ‘Fisheries and Oceans Canada’ researchers undertook a project by the name of Canada’s Three Oceans to understand Ocean conditions and the consequences of global climate changes and to provide essential information to policy makers and the Canadian Public. This project also measured water circulation timescales in the Arctic and samples were taken for nuclear traces.

Atmospheric transport today has become one of the most integral increasing concern. Growing economies such as China, Japan and Southeast Asia are emitting pollutants in Canada’s northern water bodies. Some of these contaminants come through volatilization from waters of lakes, such as the Great Lakes, and Asian lakes, where the substances had been earlier deposited through long- and short-distance atmospheric transport. This volatilization occurs in the warm season, with the toxic contaminants gradually moving farther and farther north to where waters are cooler, year-round, for the process to occur. Thus, the warming of the oceans will indirectly cause changes in fisheries and food chain patterns.