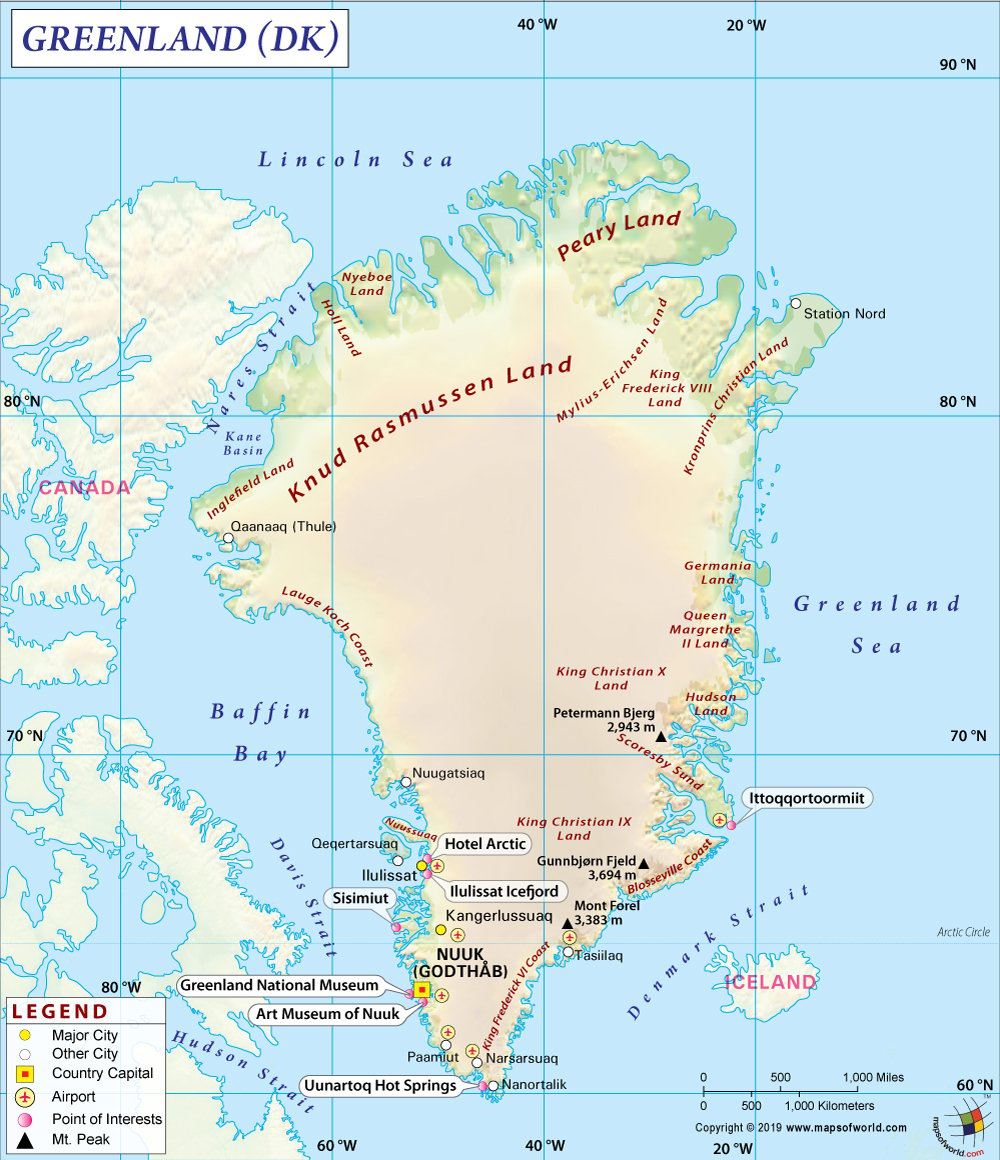 Explore this Greenland map to learn everything you want to know about this country. Learn about Greenland location on the world map, official symbol, flag, geography, climate, postal/area/zip codes, time zones, etc. Check out Greenland history, significant states, provinces/districts, & cities, most popular travel destinations and attractions, the capital city’s location, facts and trivia, and many more.

Greenland, which stands for the Land of the Kalaallit or Greenlanders, is a Danish territory, which is solely self-governed.

This Arctic nation is closely knit physically with North American continents but is even unified politically with the Europe. Greenland history dates back to the year 982 -985. Eric the Red explored the country and gave it a beautiful name of Greenland and that is after being outlawed for three years due to manslaughter in Iceland.

Greenland is acknowledged as the world’s largest island, and is the world’s prime dependent territory as far as area is concerned. Greenland covers relatively 836,109 square area of the total land space where major regions are covered with white ice sheets.

Greenland is engulfed on all ends by:

Greenland is surrounded by neighboring countries like Iceland towards the eastern front in Atlantic Ocean and Canada from the western front diagonally towards the Baffin Bay. Majority of the population inhabit along the Western coast, which is free from the ice cover sheets. The Greenlandic ice cap creates a depression on the central province within the land while forming a basin, which have risen above the sea level.

The northern part of the Greenland known as Peary Land, are free from the ice sheet cover, as the dry air of the region generates less production of ice within the province.

Greenland is nestled in the northern part of North America, lying in the midst of the Arctic Ocean and in the North Atlantic Ocean, which is towards the northeast of Canada.

The Greenland flag comprises of two horizontal bands equally placed with white color band on the topmost part of the flag and red color in the bottom base. A large disk cuts through the equal bands towards the hoist side of center wherein the upper portion is colored in red and the bottom lower in white, respectively. A local artist named Thue Christiansen conceptualized the flag. These colors inscribed within the flag typify the Danish colors wherein the white color symbolizes the presence of ice within the place while the red color denotes the sun counting for the brightness within the province.

Experience a frozen climatic condition within Greenland where temperature could be severe at times. The Danish locality is swept underneath by a four feet thick mass of ice sheet. Greenland experiences a brightly sketched long day during the summer months while the winter is comparatively colder. The Atlantic meets the Arctic Ocean along the northern province, which is enclosed by cold ocean currents that make the coast constantly cooler. This defines a typical artic climatic condition, which the place boasts of as the island is exposed to emission of radiation from the cold. The western coast of Greenland witnesses a warmer climatic condition with temperature ranging to about 6 degree centigrade.

The countryside along the south of Greenland, are characterized with green pastures during the summer months. It is generally hit by rainfall in every three days.

Flora And Fauna Of Greenland

The birch dipped with green and brown colors along with willow scrub are some of the commonly found floras of the Greenland. Berries are found in abundance during the month of August, which is used by the local people for topping their desserts. The leaves from the Qajaasaq (Ledum groenlandicum) serve as a medicinal purpose that fight against major diseases present in the locality. Crowberry used supplement vitamins during the primitive era, something that still exists.

Greenland is famous for having a pride national flower known as “Niviarsiaq” that stands for “little girl” in Greenlandic. This willow herb grows in abundance that can be characterized by its red petals and green leafs, which can be chewed and eaten either raw or cooked.

Whale of different sizes and shapes are found here especially the assorted ranges of fin whales, blue whales, humpbacks, narwhal, white whales, lesser rorquals, sperm whales and pilot whales. One may even come across faunas like seals, reindeer, The Greenlandic White-tailed Eagle and many other species.

The population of Greenland is constituted with Inuit islanders and the rest with Danish. The people are peace-loving folks and are generally open natured and open-minded. They treat their guest with warm hospitality. They maintain harmony and share commonality with the Inuits of Canada, Alaska and Siberia. The ethnic groups of this region are: Greenlander (Eskimos and white born natives) and Danish. The existing religion of the region is Evangelical Lutheran. The Danish Greenlandic (an Inuit dialect) is the local language spoken within the province.

Arts, Culture And Music Of Greenland

Culture: One get to learn about the ancient culture and heritage from the existence of the larger towns within the region. Kayaks can be frequently sighted in every harbor. The theatrical performances made in this region pertain to mythology and legendary significances. The local natives are concerned with skeletal embellishment on figures and masks, as well as facial tattoos where decoration is considered as an important source of entertainment.

Music: It was the Inuit and Danish influences of the United States and United Kingdom that helped in the emergence and existence of the Greenland Music within the country. The ULO record label one of the biggest known brand in the province brings along the music to the local public especially the local rock bands, the pop singers, the hip hop delights and the Inuit folk music.

The Inuit and the Danish natives are known to have preserved their distinct folk music style, which articulates a basic storyline that is expressed through the song.

The Yukon, Nunavut of the Canadian province along with the Northwest Territories, the US state of Alaska and a portion of eastern Russia Canadian share ethnicities of musical tones with the Inuit of Greenland.

Greenland’s drum dances are usually held in a snow house built by the local people where a sole dancer performs in tune with the song composed by his family.

The Inuit folk songs call for games like string games, hide-and-seek, juggling and rhymes and riddles. Katajjaq tradition is also quite famous here wherein two ladies stand face to face contesting with each over vocal ability.

The music instruments common to this region are fiddle, accordion, violins, brass instruments and Christian hymns. The modern style country music vaigat has gained wide acceptance within the region.

Greenland gained an upsurge in the progress of its economy from the year 1993 wherein the government followed a stiff fiscal policy from 1980s that multiplied the country’s financial resources along with the inflation that was deteriorating. The country’s revenue solely depends on the fishing and its export of shrimps in the outside international market. Tourism shares a minor portion in the potential growth of the economy’s development that is relatively seasonal. The public sector along with its owned enterprises and municipalities positions itself well within the economy. The grants offered by the Danish Government supports the place with revenue supplements.