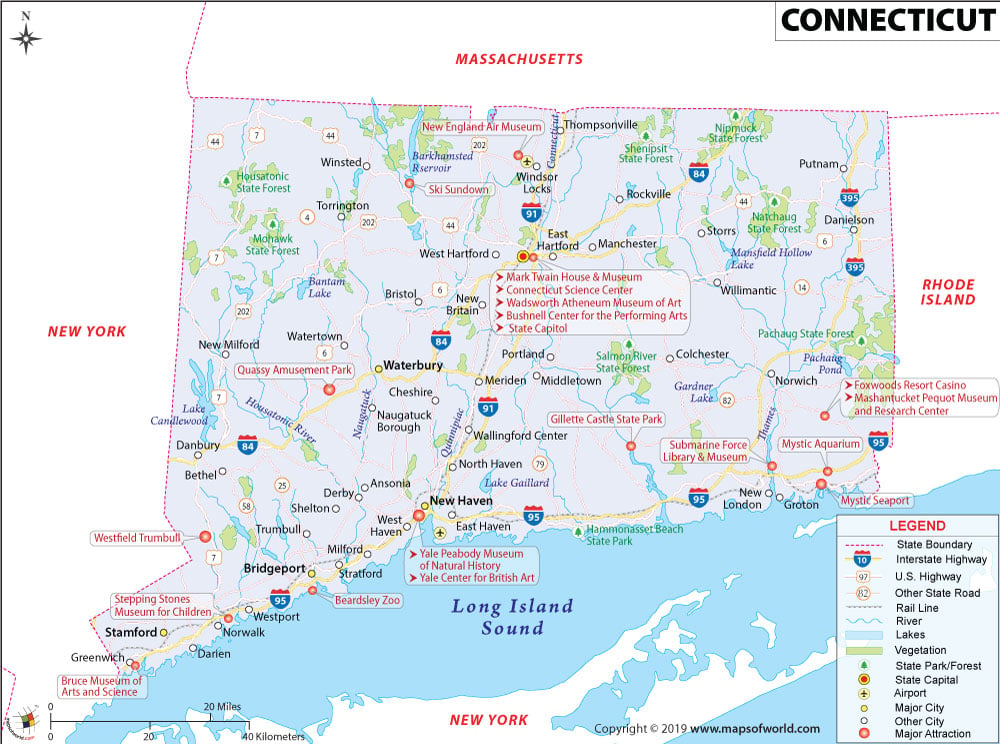 Explore this Connecticut map to know everything you want to know about the forty-eighth state of the US in terms of area. Learn about Connecticut’s location in the United States of America. Look at its geography, time zones, history, major cities, name of the capital/most significant city, area/zip codes, flag/seal, national parks, trails, frequently asked questions (FAQs), etc.

In the United States, Connecticut is the third smallest state. On January 9, 1788, it was admitted to the Union. Hartford is Connecticut’s capital city, the state’s fourth largest city, and a metropolitan area. Although English is the official language in Connecticut, people also speak Spanish and French. Connecticut is the 29th most populous state in the US.

The US state of Connecticut has many nicknames, such as:

“Qui Transtulit Sustinet, “is the State Motto for Connecticut, which means “He Who Transplanted Still Sustains.” Check Key Facts of Connecticut to learn more about this US state.

The flag of Connecticut was adopted on September 9, 1897. The flag has a baroque shield with three grapevines, each bearing three bunches of purple grapes. The background is an azure blue field. The banner below the shield has Connecticut’s motto.

Connecticut’s coat of arms is the 1711 seal of the colony that was Connecticut then. The three grapevines are believed to symbolize the colonies of Connecticut, New Haven, and Saybrook.

On March 24, 1931, the General Assembly of Connecticut adopted the state’s official coat of arms design.

Connecticut’s official shield is a rococo design. It has a white field having three grapevines in the center, which are shown to bear fruits. Below is a white streamer with clefts at each end. Two fine lines outline the clefts. The motto is written in solid letters of a medium bold Gothic font. The coat of arms has appeared on the state flag since 1887.

The State of Connecticut is situated in the southern New England region of the United States. It has:

The Taconic has over hundreds of miles of trails, including segments from the 3,500 km Appalachian Trail. Taconic in Native American means “in the trees.”

These uplands are a geomorphic subsection. It is not a distinct system of mountain ranges. The contour is hilly and not mountainous.

Learn about the location of mountains, rivers, lakes, the state’s capital, state boundary, ocean, and neighboring states from this Physical Map of Connecticut.

Connecticut started as three specific settlements of Puritans. They came from Massachusetts and England and united under one royal charter in 1663.

The settlements grew affluent from the trade and agriculture of its people, mainly ethnic English Protestants. Connecticut came to be popularly known as the “land of steady habits” because of its inhabitants, who were very conservative politically, socially, and even from a religious standpoint.

The main churches of this land were the Congregational and Unitarian churches. Connecticut had an influential role to play in the American Revolution. Eventually, it became the center of the conservative, business-minded Constitutionalism Federalist Party.

The word “Connecticut” comes from the French distortion of the Algonkian word quinetucket, meaning “beside the long, tidal river.”

In 1636, Rev. Thomas Hooker and Rev. Samuel Stone led around 100 people to establish the settlement of Hartford. Rev. Stone was born in Hertford, England, hence the name. Thomas Hooker, “the Father of Connecticut,” was a strong personality in the initial growth of New England as a colony.

Hooker was one of the most prodigious preachers among his contemporaries. He was a knowledgeable writer on Christian subjects. He was also the first minister of Cambridge, Massachusetts, and one of its initial settlers. Hooker founded the city of Hartford as well as the state of Connecticut.

Connecticut had a prominent part in the country’s industrial revolution. A number of its factories became famous for advanced machinery. In education and intellectual discourses, Yale College led the way.

The college had scholars like Noah Webster and writers like Mark Twain. This famous writer lived in Connecticut and established a deep connection with the Mississippi River.

The settlers landed in Connecticut from eastern and southern Europe at the beginning of the twentieth century. In the 21st century, this state has famous for its jet engines, nuclear submarines, and advanced pharmaceuticals.

The Connecticut Area Codes Map helps you locate a particular area code. You can also use it to learn more about the area code boundary, county and state boundaries, and state capital.

There are 277 active zip codes in Connecticut. Some of the state’s best zip codes to live in include 06103, 06119, 06033, and many more. You can locate a particular zip code’s location, boundary, state boundary, and state capital with the help of the Connecticut Zip Codes Map.

Learn about the state’s major cities from this Connecticut cities map. It also helps you to know the exact location of the state capital, other cities, state boundaries, neighboring states and oceans, and many more.

Connecticut has two National Parks with an annual visitor count of 25,430. The major national parks in Connecticut are Washington-Rochambeau Revolutionary Route, Weir Farm National Historical Park, and many more.

The north of Connecticut has typically cold winters with medium snowfall and hot, sweaty summers. As you move towards the far south and coastal region, you will encounter cool winters with a blend of rain and intermittent snow. You will also face the long, hot, sticky summers in the middle and lower East Coast.

FAQ #1: What Time Zone Is Connecticut?

FAQ #2: Where is Connecticut?

Ans: Connecticut is in the northeast corner of the United States.

FAQ #3: Is Connecticut A Red State?

Ans: No, Connecticut is a Blue state. Here, Joe Biden won by 20 points, a healthy increase over Hillary Clinton’s 13 points in 2016.

FAQ #4: What Is Connecticut Known For?

Ans: Connecticut is known for its many firsts : (a) Hamburger (b) Polaroid camera (c) Helicopter (d) Color television (e) nuclear submarine. It is also famous for its beautiful Fall foliage and Yale University. Check out these places to visit in Connecticut.

FAQ #5: What Is The Capital Of Connecticut?

Ans: Hartford is the capital of Connecticut

FAQ #6: What Planting Zone Is Connecticut?

Ans: In Connecticut, the planting zone ranges from 5 to 7

FAQ #7: How Is The Appalachian Mountains Connected To Connecticut?

Ans: To the west of Connecticut are the Appalachian Mountains, which run north, crisscrossing the state into Massachusetts.

FAQ #8: What Is The Population Of Connecticut?

Ans: The population of Connecticut in 2022 is estimated to be 3.6 million.

FAQ #9: Who Is The Governor Of Connecticut?

Ans: Democrat Ned Lamont or Edward Miner Lamont Jr. is the current governor of Connecticut. He is Connecticut’s 89th governor. He assumed office on January 9, 2019.

FAQ #10: What Is The Most Common Animal In Connecticut?

Ans: Eastern gray squirrel is the most common animal in Connecticut. Its scientific name is Sciurus carolinensis, the largest squirrel found here.