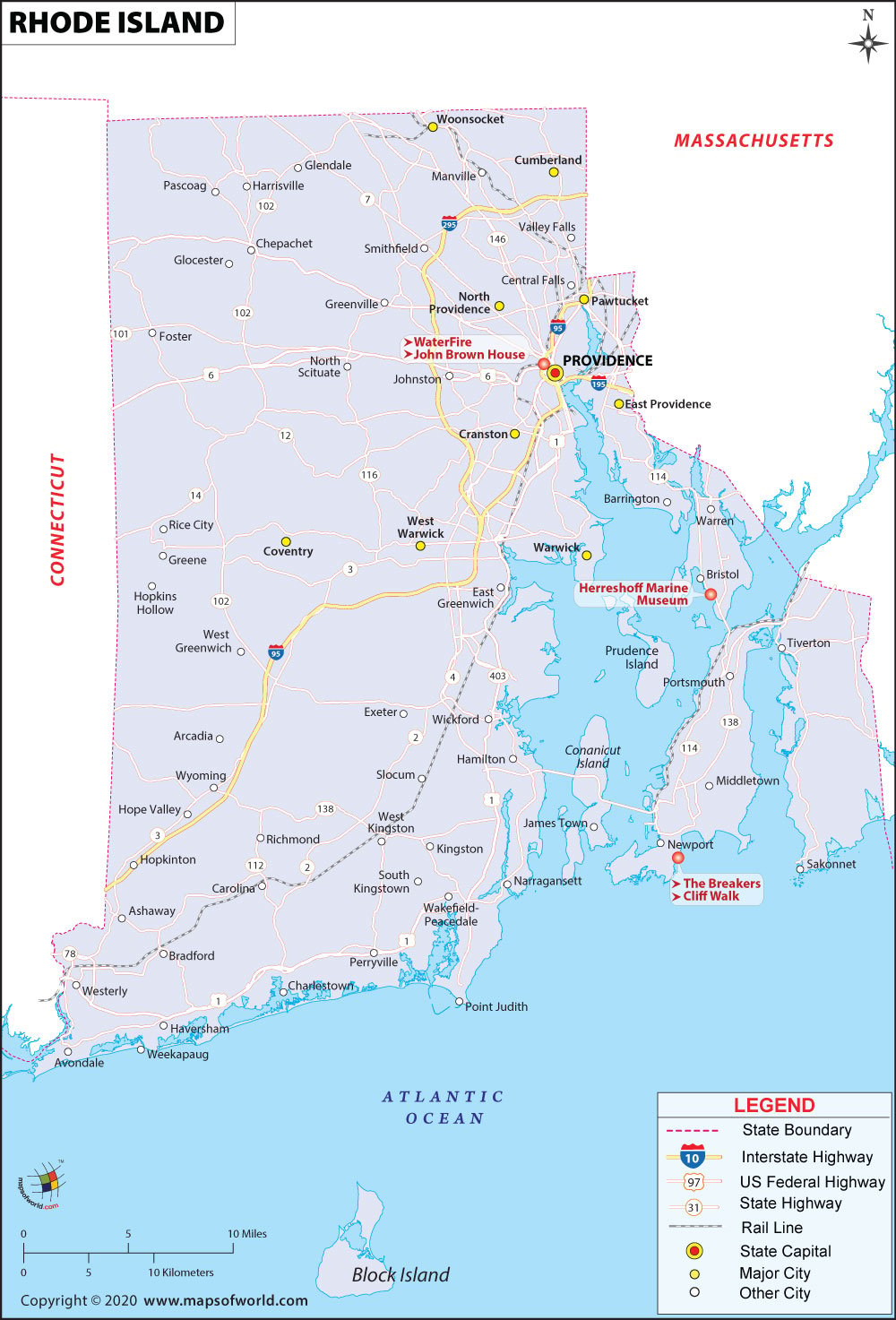 Explore this Rhode Island Map to know everything you want to know about the thirteenth state of the US. Learn about Rhode Island’s location in the United States of America. Look at its geography, national parks, trails, time zones, major cities, name of the capital/most significant city, history, area/zip codes, flag/seal, frequently asked questions (FAQs), etc.

Rhode Island is the thirteenth and smallest state by area in the United States. On May 29, 1790, it was admitted to the Union. Providence is Rhode Island’s capital city by population but not by area. New Shoreham is the largest city by area. English is the de facto official language in this state, and more than 50% of its residents speak this language. Rhode Island is one of the states having a minor population in the US.

Rhode Island is nicknamed “The Ocean State.” It is also sometimes called “Little Rhody.” Rhode Island’s state motto is “Hope.” Check Key Facts of Rhode Island to learn more about this US state.

The Union adopted the Rhode Island flag on November 1, 1897. However, the state’s non-military state flag was adopted on March 30, 1877.

The Rhode Island state flag is white and has a gold anchor in the middle (a symbol of hope). It has thirteen gold stars surrounding it. Below the golden anchor is a blue ribbon where the word “hope” is written.

Rhode Island Location Map shows the exact location of the US state of Rhode Island on the United States map. This map shows the boundaries, neighboring countries, and oceans.

The State of Rhode Island is in New England. It has sandy shores and seaside colonial towns. One of its large cities, Newport, is famous for sailing and Gilded Age mansions. Providence is the capital city of Rhode Island. Brown University, Roger Williams Park, and Waterplace Park are essential landmarks. It also has the Riverwalk, with the well-known WaterFire art installation.

Rhode Island is bordered by:

The time zone in Rhode Island is GMT-4. It is officially in Eastern Daylight Time.

smallest state in the United States in terms of area. The state is also known as the Ocean State of the US because it has 400 miles of coastline.

Around 66% of western Rhode Island is integral to the New England Upland. It has hills as high as 800 feet (240 meters) above sea level. The Narragansett, also called Seaboard Lowland, has coastal lowlands and islands less than 200 feet (60 meters) high. Jerimoth Hill is the highest mountain peak. Its height near North Foster is 812 feet (247 meters).

Rhode Island’s area includes Block Island, around 10 miles (16 km) south of the mainland, and many islands in Narragansett Bay. This includes Conanicut, Prudence, and Rhode Island.

Many river systems inundate Rhode Island. The major ones are the Blackstone, the Pawtuxet, and the Pawcatuck. The Blackstone River and its branches flood the northern part of the state.

Starting in Massachusetts, the Blackstone originally supplied hydropower to the textile mills at Woonsocket, Pawtucket, and several villages along the way. The Pawtuxet River inundates the central part of the state. Its north tributary was inundated in the 1920s when the city of Providence constructed a dam in Kent village.

Thus was born the Scituate Reservoir. It is today the state’s largest source of fresh water, supplying Providence and its adjoining communities. The Pawcatuck River runs west across the state’s southern portion into Block Island Sound, to Westerly’s south.

Rhode Island’s soils have their origin in glaciers. In the west, several rocks and boulders are found on undulating land with offshoots of granite and gneiss. Superior grounds with a limited number of stones are present in the lowlands and neighboring bay islands, where the soil has a sedimentary base. Check this Rhode Island Topographic Map to learn more.

To the west of Narragansett Bay and in the river valleys, sand and gravel from the glaciers are quickly washed away.

Narragansett Bay was home to Native Americans for many years. Then the English settlers began arriving in the 1620s and 1630s. According to reliable estimates, before 1610, as many as 144,000 Native Americans lived in the south of New England.

The tribal people were good to the new settlers, but the English were carriers of deadly diseases. So, a large population of Native Americans perished from epidemics and endemics.

For the first 50 years, the English people and the Native Americans cohabited peacefully. However, by the 1670s, deadly diseases had killed most of the indigenous people, and the English settlers grew in number. The situation became such that by 1832, Rhode Island had only 80 Native Americans in its population.

The 1890s saw the advent of a large number of Italian immigrants. In 1911, immigrants from all parts of Europe entered officially via Providence, as it had become an official port of entry by then. By 1920, around thirty percent of Rhode Island was inhabited by foreigners.

Post World War II, people from East and Southeast Asia, Africa, and Latin America came to Rhode Island in large numbers. Hispanics were more than Afro- Americans. But most Rhode Islanders today claim to be ancestors of Europeans. Around sixty-six percent of the population in the state is Roman Catholic.

Check the Rhode Island County Map to learn more about the counties.

The US State of Rhode Island has only one area code currently:

The Rhode Island Area Codes Map helps you locate details of the area code. You can also use this area code map to learn more about the area code boundary, county and state boundaries, and state capital.

Know about the state’s major cities from this Rhode Island cities map. It will also help you know the exact location of state/neighboring states, the state capital, other cities, oceans, and many more.

The busiest airport in Rhode Island is TF Green International Airport, which lies six miles away from the capital city of Providence. The other airports are Westerly and North Kingstown.

Check the location of other small private airports in the state on the Rhode Island Airports Map. This map also shows Rhode Island’s state and country boundaries, cities, the state capital, neighboring states, and oceans.

Rhode Island’s climate is dank, with a continental flavor; winds blow mainly from the west. The influence of the sea is palpable in the differences between the temperatures in coastal areas and inland locations.

Ans: The time zone in Rhode Island is GMT-4. It is officially in Eastern Daylight Time.

FAQ #2: Where is Rhode Island?

Ans: Rhode Island is on the East Coast of the United States.

Ans: No, Rhode Island is a Blue state. Incumbent US President Joe Biden won the state in 2020 by 20 points.

FAQ #4: What Is Rhode Island Known For?

Ans: Rhode Island is known for its silverware and exquisite jewelry.

FAQ #5: What Is The Capital Of Rhode Island?

Ans: Providence is the capital of Rhode Island.

Ans: In Rhode Island, the planting zones are 5-7.

FAQ #7: Are there Any Beaches In Rhode Island?

FAQ #8: What Is The Population Of Rhode Island?

Ans: The population of Rhode Island in 2022 is estimated to be 1 million.

FAQ #9: Who Is The Governor Of Rhode Island?

Ans: Democrat Daniel J. McKee is the current governor of Rhode Island. He is Rhode Island’s 76th governor. He assumed office on March 2, 2021.

FAQ #10: Do You Have To Pay Local Sales Taxes In Rhode Island?

Ans: No, you don’t have to pay local sales taxes in Rhode Island.