What are the popular places to visit in Connecticut? - Answers

Click me
Answers » United States » What are the popular places to visit in Connecticut?
5 / 5 ( 5 votes ) 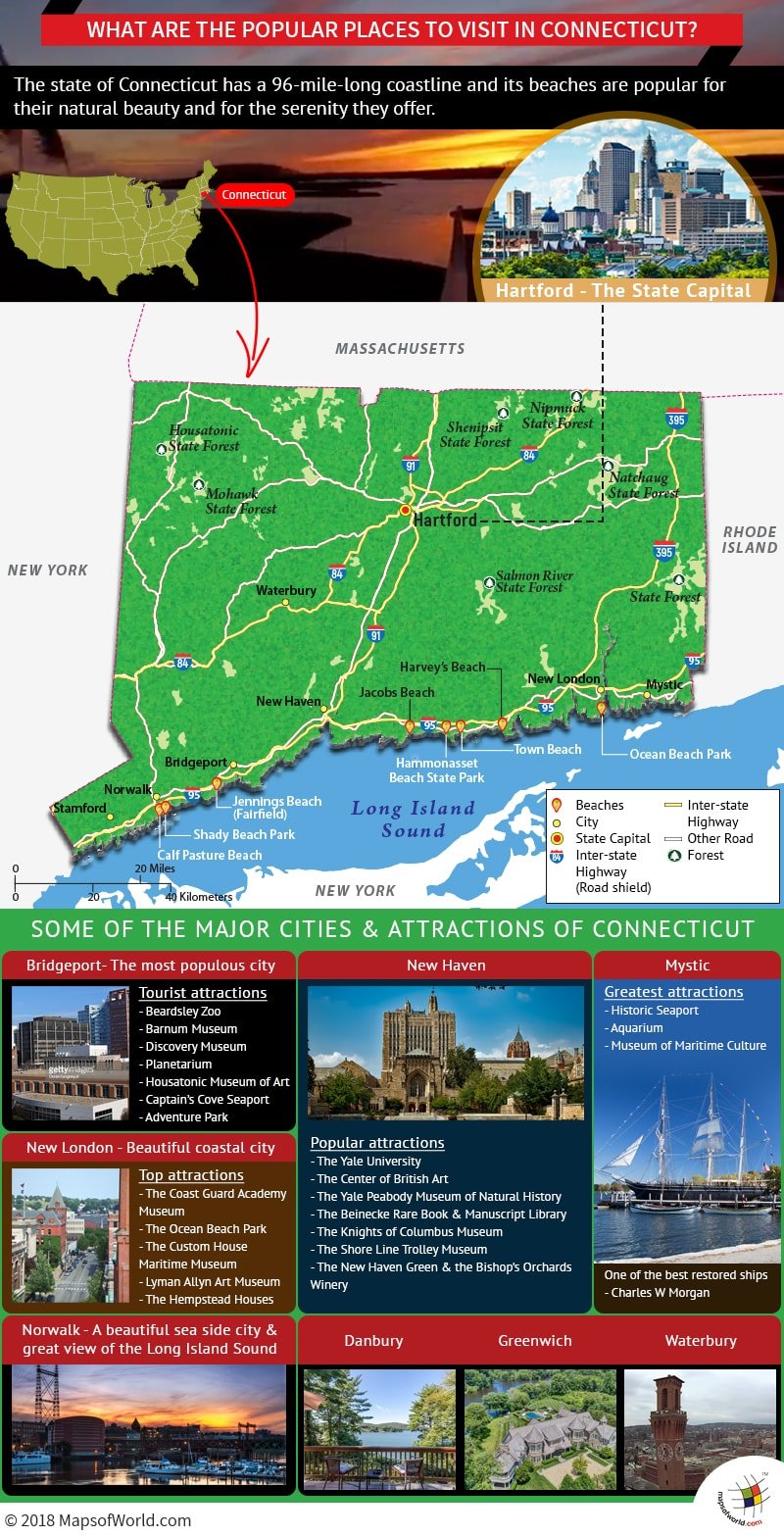 Located in the northeastern region, the state of Connecticut was one of the 13 original colonies – and is part of the New England region. The Constitution State is the third smallest among the 50 states in terms of size. Connecticut is spread over 5,543 sq. miles. It is, however, ranked fourth by population density. It is home to a population of 3.59 million people (2015 data). Its proximity to New York makes Connecticut a great getaway and its beaches coveted tourist attractions. New Haven in Connecticut is home to the Yale University – one of the oldest and most coveted Ivy League universities in the country. Apart from this, the state’s colonial settlements and historic cities also attract a great number of tourists.

The state of Connecticut has a 96-mile-long coastline and its beautiful beaches are popular for their natural beauty and for the serenity they offer. From taking long walks along the boardwalk to indulging in watersports, Connecticut beaches have much to offer. Some of the top beaches of the state include –

When you peel yourself away from the rustic charm and the attractive beaches of Connecticut, visit the cities. These are populous but well maintained urban centers with numerous corporations, museums, and galleries. Some of the major cities of Connecticut are –

Bridgeport– The most populous city in Connecticut, Bridgeport is also home to a number of tourist attractions including Beardsley Zoo, Barnum Museum, Discovery Museum and Planetarium, Housatonic Museum of Art, Captain’s Cove Seaport, and the Adventure Park.

Mystic – The historic seaport and aquarium are the greatest attractions of this charming seaside town in Connecticut. The museum brings to life America’s glorious maritime culture. One of the best-restored ships you’re likely to find here is the Charles W Morgan. The underwater aquarium is home to a vivid collection of sea life.

New Haven – Yale University is the most prominent center of New Haven. The Yale University Art Gallery, the Center of British Art, the Yale Peabody Museum of Natural History, the Beinecke Rare Book & Manuscript Library, the Knights of Columbus Museum, the Shore Line Trolley Museum, the New Haven Green and the Bishop’s Orchards Winery are among its greatest attractions.

New London – New London is a colonial and beautiful coastal city with a strong maritime legacy. It is home to the US Coast Guard Academy and US Naval Submarine Base. Some of the top attractions of New London include the Coast Guard Academy Museum, the Ocean Beach Park, the Custom House Maritime Museum, Lyman Allyn Art Museum, and the Hempstead Houses. The Fort Turnbull State Park is also in the vicinity.

Norwalk – Another beautiful seaside city with a great view of the Long Island Sound. Top attractions of Norwalk include the Maritime Aquarium, the Sheffield Island Lighthouse (which can be reached by ferry), the Lockwood-Mathews Mansion Museum, and the Stepping Stones Museum.

Danbury, Greenwich, and Waterbury are other important cities and attractions of the state.

Other popular places to see in Connecticut –

As you travel across the beautiful and charming state of Connecticut, stay in any of these historic hotels –

Visit the following to learn more about Connecticut: