What are the popular places to visit in Colorado? - Answers 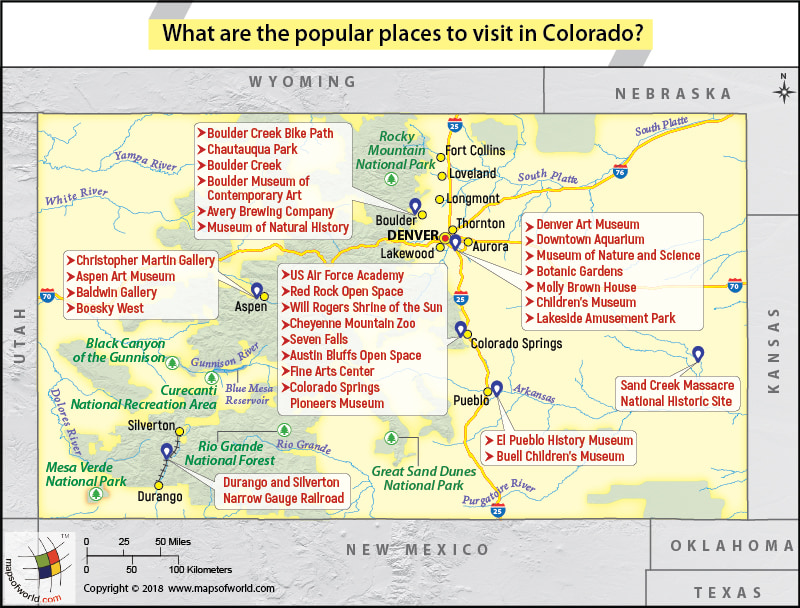 Right at the heart of contiguous United States is Colorado – the Centennial State. Colorado joined the Union in 1876, a hundred years after the signing of the Declaration of Independence, and hence, the state’s nickname. Colorado is known for its beautiful vistas, rugged landscape, and the towering peaks of the Rocky Mountains. The state attracts millions of visitors – hikers, trekkers and campers through the summer months and avid skiers through the winters. It is also home to some fine universities such as the University of Colorado, Colorado State University, and the U.S. Air Force Academy.

The stunning landscape and wilderness of Colorado come into perspective when looking at the National Parks in the state. With numerous peaks above 14,000 feet, the state is open to adventure lovers round the year. Let’s take a look at a few of the popular attractions in the state –

Mesa Verde National Park – This national park is home to some of the most wonderful views in the state, but apart from the majestic cliffs it also provides insights into the lives of the Ancestral Pueblo people who lived here nearly 700 years ago. Do not miss their well-preserved cliff dwellings in the park. These were built between the 6th and the 12th century. The Mesa Verde National Park is also a UNESCO World Heritage Site.

Great Sand Dunes – Home to the tallest sand dunes in the United States, this national park and preserve covers over 30 square miles. Some of the sand dunes here are approximately 750 feet tall. Sand sledding, camping along the Medano Creek, and wildlife spotting are favorites with the visitors to this park.

Curecanti National Recreation Area – Encompassing the three major reservoirs of Blue Mesa Reservoir, Crystal Reservoir, and Morrow Point Reservoir, Curecanti is popular among those passionate about boating and fishing. The camping grounds are popular with tourists all around the year.

Black Canyon of The Gunnison – The deepest valleys carved out of the Gunnison River, the sharpest cliffs and ancient rocks make the Black Canyon one of the most attractive places in Colorado. Deep hiking trails crisscross the valley and steep camping sites make for wonderful adventures.

Despite acres and acres of wonderful scenic beauty and wilderness, Colorado is also home to a number of populous urban centers

Denver – The capital of Colorado, Denver, is also the most populous city in the state. Popularly referred to as the Mile-High City due to its elevation and proximity to the Rocky Mountains, Denver is one of the major visitor attracts in the state. The Denver Art Museum, Downtown Aquarium, Museum of Nature and Science, Botanic Gardens, Molly Brown House, Children’s Museum, and Lakeside Amusement Park are among the city’s top attractions.

Boulder – Near perfect weather, beautiful views all around and a lively cultural scene – Boulder’s beauty is its greatest attraction. The Boulder Creek Bike Path, Chautauqua Park, Boulder Creek, Boulder Museum of Contemporary Art, Avery Brewing Company, and Museum of Natural History are among its top attractions.

Aspen – One of the top skiing destinations in the state and perhaps all of the country. Beyond the ski resorts, Christopher Martin Gallery, Aspen Art Museum, Baldwin Gallery, and Boesky West are among its top attractions.

Pueblo – Pueblo is another major city which attracts tourists in great numbers. El Pueblo History Museum, Buell Children’s Museum are some of the major attractions of the city.

Visit the following to learn more about Colorado: