Physical Map of Arkansas - Located in the southeastern United States, the state of Arkansas covers an area of 53,179 square miles. From northwestern mountains to southern lowlands, Arkansas comprises a range of physical regions. 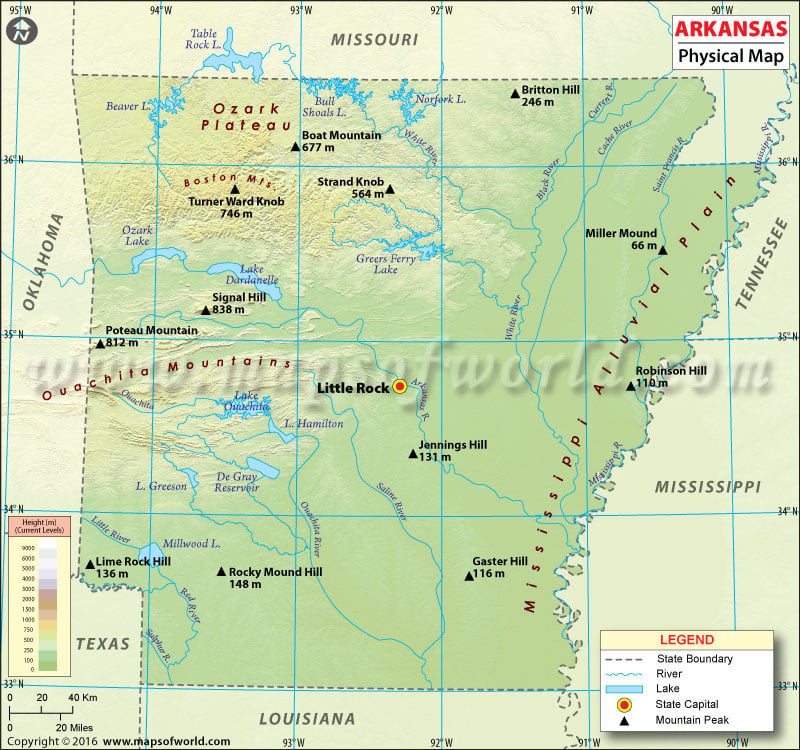 The Ozark Plateau spans the northwestern portion of the state. This hilly region is heavily forested by an oak-hickory ecosystem and carved by numerous rivers and streams. Turner Ward Knob is the highest peak in the Boston Mountains which extend south of the Ozark Plateau. The Arkansas River Valley stretches between the Ozark and Ouachita Mountains. The valley is dotted with wine country, historical sites, and travel attractions. Ouachita Mountains in west central Arkansas are home to the highest point in Arkansas state, Mount Magazine with an elevation of 2,753 feet (839 meters).

On the southern edges of the Ozarks and Ouachitas, the forests and prairies yield the flatter landscape of the Mississippi Delta Region that covers the eastern and far-southern areas of the state. Southeast Arkansas is contiguous with the Mississippi Delta which is generally flat, fertile, and swampy. The Piney Woods of Arkansas Delta features dense pine and cypress forests. The 150-mile-long Crowley’s Ridge in Northeast Arkansas rises around 200 feet (61 m) above the surrounding delta lowlands. Arkansas Timberlands encompass the area south of the Ouachita Mountains west of the Arkansas Delta.

Where is Arkansas Located?

Places to Visit in Arkansas