Map of the Capital of Arizona 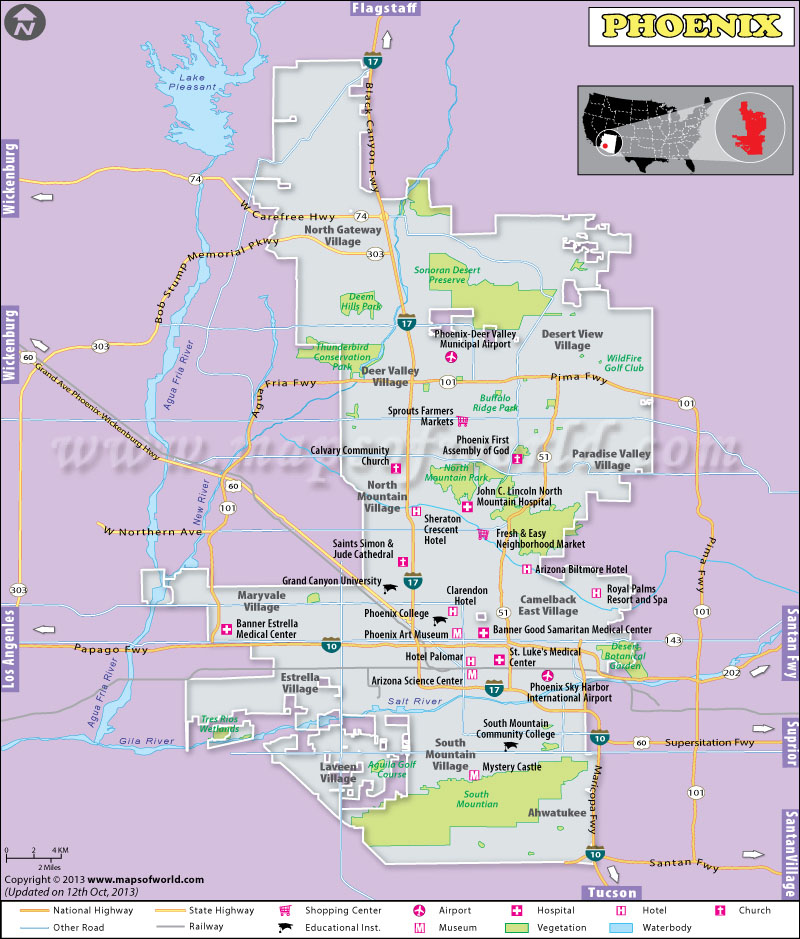 Phoenix is the capital of Arizona and the county seat of the Maricopa County. It is Arizona's largest city and the 12th largest metro in the United States.With a population of 1,445,632 (2010 estimates), it is America's most populous state capital. Situated on the northeastern part of the Sonora desert, Phoenix lies on the Salt River valley. It has the White tank Mountains to the west, the Superstition Mountains to the east, and the McDowell Mountains to the northeast and the Sierra Estrella to the Southwest. The Phoenix Mountains and South Mountains are within the city limits.

Phoenix was founded in 1861 and in 1881 it was incorporated as a city. At present, it is the economic, political, and cultural hub of Arizona. Phoenix is known for its breathtaking scenery, cowboy culture, sports, sprawling golf courses, and vibrant cultural scene. It is also home to many notable political dignitaries like John McCain, Carl Hayden, and Barry Goldwater.

When is the best time to visit Phoenix :
March to May is the best time to be in Phoenix. The weather is sunny yet pleasant and the city hosts a number of festivals during this period. Autumn too is popular season. Winter is relatively warmer and tourists, particularly from Midwest and Canada flock to Phoenix at this time of the year to bask in the sun. Summer in Phoenix like the rest of Arizona is quite hot (average summer temperature is above 100°F or 38°C) and the tourist inflow is rather low.

Hotels in Phoenix :
There are a plenty of hotels ranging from the pocket friendly ones to the expensive ones in Phoenix. Some popular luxury hotels are the Clarendon Hotel, Sheraton Phoenix Downtown Hotel, Pointe Hilton Squaw Peak Resort, Royal Palms Resort and Spa, and Sheraton Wild Horse Pass Resort and Spa. If you are looking for budget hotels then some popular options are Hampton Inn, Best West Inn, LaQuinta Inn, and Travelodge Phoenix. The rates of all these hotels escalate during the peak season, so reservations need to be made at least a month in advance. Summer is a lean period and the prices fall as much as 30% and many hotels even make some lucrative offers to attract tourists.

Things to do in Phoenix :
Phoenix has a lot to offer to its visitors. The city is famous for its beautiful landscape cultural shows, museums, and events.

Museums :
There are quite a number of museums in and around Phoenix. The Phoenix Art Museum houses a huge collection of works of American, Asian, Western American, Latin American, and contemporary artists. This museum is the largest museum in southwest America and is very popular, particularly among art aficionados. The Musical Instrument Museum situated in northern Phoenix has the largest collection of musical instruments from all over the world and is another tourist favorite. If you are interested in knowing about the culture and living history of the natives, then the best place to visit is the Heard Museum. This museum also hosts a number of cultural events, fairs, and festivals associated with the natives; the most well known one being the Indian Fair and Market, held in February every year. Arizona Science Center, Phoenix Museum of History, Phoenix Children Museum, and Hall of Flame Firefighting Museum are some other important museums in Phoenix.

Parks, Botanical Gardens, and Zoo :
Pueblo Grande Museum Archeological Park is a significant site of native Indian history. This site was inhabited as early as 450 A.D, but was abandoned in 1450 A.D. Today it is an important part of Phoenix's historical landscape and is a National Historic Landmark site (declared in 1964). Phoenix is also home to the world's largest municipal park - the South Mountain Park, which is a popular destination for hiking, horse riding, and biking. The Papago Park which houses the Desert Botanical Garden, the Phoenix Zoo and the Hole-in-the-Rock geological formations is another favorite spot. The Desert Botanical Garden gives visitors a good idea about desert flora. The Phoenix Zoo is the United States' largest non-profit zoo. It also has a sanctuary for endangered and unwanted animals and has been declared as Phoenix Point of Pride. Some other notable parks in Phoenix are Big Surf, Wet 'n' Wild Phoenix, Castles N' Coasters (Phoenix's oldest amusement park) and Encanto Park.

Activities :
For tourists traveling to Phoenix, a tour to the Grand Canyon is a must. There are a number of tour packages to the site to choose from. You can also opt for the Apache Trail drive, if you enjoy challenging drives. The 30 mile long trail is a treat for any nature lover and on your way you will pass several landmarks like Lost Dutchman State Park, Saguaro Lake, Goldfield Ghost Town, and the Canyon Lake Recreation Area. If you want to tube down the Salt River in tune with the Arizonan tradition, then head to the Salt River Tubing and Recreation, near Mesa, which is open 7 days a week. Some popular hiking trails in Phoenix are the Camelback Mountain, Piestewa (Squaw) Peak, Shaw Butte with towers and Deem Hills. Arizona is the land of the cowboys and in Phoenix you can go horse riding just like them. You can take your family to Arizona Horses (Ponderosa Stables and South Mountain Stables) and Western Destination, two excellent places for horse riding and enjoy a day full of fun.

Entertainment :
Do visit the Arizona Opera House which produces five operas every season. Another important venue is the Orpheum Theatre which was traditionally used for vaudeville performances and currently houses the Phoenix Metropolitan opera. If you are traveling with kids, don't forget to take them to the Great Arizona Puppet Theatre where they will be entertained by a group of puppets playing their favorite fairy tale characters.

Phoenix has a lively music scene and if you want to listen to live musicians belting out popular songs in every genre then Char's Has the Blues (for blues), Clubhouse Music Venue (to listen to upcoming bands), Sugar Daddy (rock music), and Rhythm Room (for regional and local talents) are the places to visit.

Where to Eat in Phoenix :
Phoenix is known for its love for food, particularly Mexican cuisine. Some popular restaurants serving Mexican delicacies are Poncho's Mexican Food, Rosita's Place, El Bravo, Carolina's Mexican Food and Mangos Mexican Cafe. Some other eateries in Phoenix are Mandala Tearoom (Vegetarian), Chelsea's Kitchen (go there for tacos, salads and mouthwatering meats), McAlpine's Restaurant and Soda Fountain (to enjoy your soda with some traditional food) and Cheuvront Restaurant and Wine Bar (for good food and wine).

Where to Shop in Phoenix :
When it comes to shopping, Phoenix never disappoints. America's Park n' Swap is a huge flea market where you can get almost anything you want. The Indoor Swap Mart. the Desert Sky Mall, Biltmore Fashion Park, Metrocenter Mall and Paradise valley Mall are some popular shopping centers.If you want to mingle shopping with entertainment, then, Desert Ridge is the perfect destination. Arizona is the place of the cowboys and you may want to buy a cow boy/girl gear for yourself. Then pay a visit to Sheplers Western Wear or Cowtown Boots as they have what you are looking for.