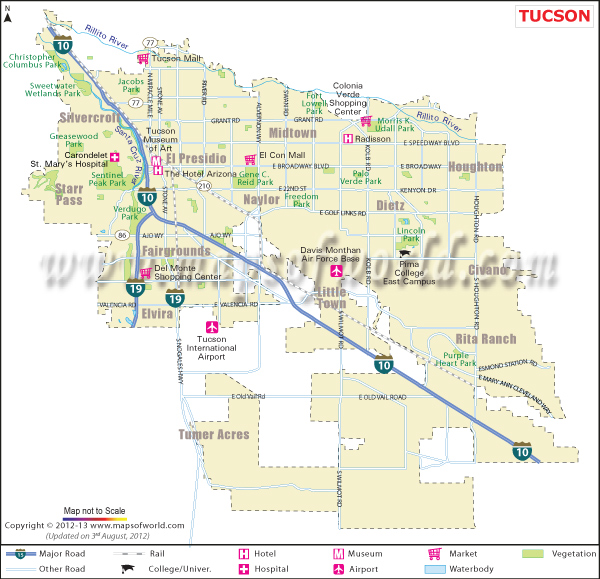 The city of Tucson is the administrative seat of the Pima County of Arizona, United States. With the geographic coordinates, 32° 13' 18" N and 110° 55' 35" W, Tucson is at a distance of about 118 miles southeast of Phoenix, the capital of Arizona. Tucson stands on a fertile plain in the midst of the Sonora Desert .It is surrounded by five mountain ranges - the Tucson Mountains to the west, the Rincon Mountains to the east, Santa Rita Mountains to the south, and Santa Catalina Mountains and the Tortolita Mountains to the north. The city lies on the bank of the Santa Cruz River which was once a perennial river, but is now dry for most part of the year.

The name Tucson is derived from the O'odham name "cuk-son" which means base of the black hill, perhaps a reference to a nearby volcanic mountain.A large number of industries in Tucson are involved in the optical and optoelectronic works which has earned the city its sobriquet - Optics Valley. Old Pueblo is another nickname of Tucson.

Which is the Best Time to Visit Tucson ?
Summer in Tucson, like in the rest of Arizona, can be quite hot. The period from May to September is not popular with tourists. The weather is pleasant in July and August with occasional showers bringing down the heat. The best time to visit Tucson, however, is between November and April. The hotel rates are highest during this period; it is better to make reservations well in advance.

Airport and Public transit in Tucson
The Tucson International Airport which connects 17 destinations in the USA is about six miles south of the central business district. It is a busy airport and the second largest commercial airport in Arizona. Tucson has a well connected bus network system which was adjudged America's Best transit System in 1988 and 2005, and Arizona's Best transit System in 2004 and 2012.. The Tucson Modern Streetcar project that seeks to connect all major centers of the city is currently under construction. Tucson is also a cycle friendly city and it is pretty common to see people riding cycles.

Tucson City Attractions and Activities
One can never get bored in Tucson as the city offers the visitors a vast array of things to do and places to visit.

Festivals and Fairs
Quite a number of fair and festivals are held in Tucson around the year. The most famous of them is perhaps the Tucson annual Gems and Minerals show that takes place between late January and mid-February. It is the world's largest gems and minerals show and is held in as many as 45 locations in Tucson.

Other important festivals and fair that are a 'must see' for tourists are Tucson Folk Festival (musical festival held on the first Saturday and Sunday in May), Fourth Avenue Street Fair (held twice, in December and late March-early April), TAWN Fall Festival (festival for the pagans, held in autumn), the Tucson Rodeo (held in February) and All Souls Procession Weekend (the biggest festival of Tucson, celebrated on the first Sunday in November).

Museums and National Parks
The Sonora Desert Museum undoubtedly tops the list of any Tucson tourist itinerary. It is a museum, a zoo, and a botanical garden - all three clubbed into one and gives its visitors a feel of what it is like to be living in south Arizona. The Museum of the Horse Soldier, dedicated to the history of dragoon units and cavalry troops, and the Titan Missile Museum, a former missile location, are also worth a visit.

The Saguaro National park is an important tourist destination. It derives its name from a huge cactus plant, Saguaro that is endemic to this part. Besides cactus, this national park is also home to the endangered Lesser Long-nosed Bat and Mexican Spotted Owl. The Reid Park Zoo with its pygmy hippos and large anteaters is a tourist favorite.

Cultural and Historical Attractions
If you are interested in knowing what an original adobe house looks like, then Arizona Historical Society is the place to visit. For the movie buffs a visit to the Old Tucson Studios, which was originally a studio for the movie Arizona and currently a movie theme park, is something that cannot be missed. The Fort Lowell Museum, Jewish Heritage Center, Tucson Chinese Cultural Center, and the Mission San Xavier del Bac are some other places of tourist interest in Tucson.

Skiing and Hiking
Tourists looking for adventure can go hiking and skiing in Mt. Lemmon, the highest peak of Santa Catalina mountains. Summerhaven in Mt. Lemmon has many lodges and cabins where the travelers can stay and go for hiking. Mt. Lemmon Ski Valley has one ski lift and 18 ski trails and it is the southernmost ski resort in the United States.

Where to Eat in Tucson
Most of the restaurants in Tucson are located in the northern part of the city. Some of the favorite restaurants of the city are the Bison Witches (a place frequented by college goers), Blue Willow Restaurant, Janos (perfect for a romantic dinner), Sakura (Japanese Restaurant), B Line (the place to be if you enjoy your drink), Something Sweet Dessert Lounge (for those of you with the sweet tooth), and Mi Nidito (for the Mexican flare).

Where to Shop in Tucson?
Tourists in Tucson are spoilt for choice when it comes to shopping. There are many options in the city. The 4th Avenue Shopping District in downtown Tucson, the Campbell Avenue District, the Lost Barrio and the Main Gate district are some of the shopping districts which are quite popular. Tucson also has a number of malls such as the Tucson Mall (largest mall in Tucson), El Con Mall (Tucson's oldest mall) La Encantada Mall in northern Tucson, and Foothills Mall, to name a few.

Higher Education in Tucson
Tucson is also an important center for higher education and attracts a number of foreign students every year. The University of Arizona, the first university set up in the state, is in Tucson. The Arizona State University, the University of Phoenix, and the Northern Arizona University have campuses in Tucson. Other institutions of higher learning in Tucson are the Art Center Design College, Brown Mackie College, Pima Community College, Prescott College, the Art Institute of Tucson, and Arizona School of Acupuncture & Oriental Medicine.

Tucson is an interesting city with much to be seen, with a number of exciting activities and is a popular winter tourist destination.